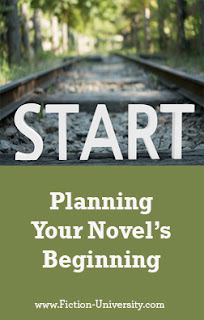 It's NaNo prep time again, and I always like to pull out these tips on plotting your novel's beginning, middle, and ending to help those going for 50K words come November (or if you're just about to start a new novel on your own).


For many, the beginning of a novel is the hardest part. Getting the right opening scene, finding the right inciting event, even figuring out the perfect first sentence can keep you from getting anywhere at all. But don't worry.  Beginnings aren't are scary and they appear.

In many ways, they're the easier part, since you probably already know the most critical aspects of your story--the protagonist, the goals, the conflict, and the setting.

If you're not yet sure on what to put in your novel's beginning, let's take a closer peek at what goes into a beginning.

I find it helpful to breakdown the novel into parts. This makes it easier to focus on the part you're working on.


If you're writing a 50,000-word novel (even if there are plans to flesh it out to longer after the first rough draft), your opening is going to run about 12,500 words, or roughly 25% of the book. If you're doing a half novel, you'll be around 25,000 words, maybe fewer if your word count is under 100,000. Just look at your target word count and do the math. (And bear in mind these are all general guidelines, not hard-and-fast rules)

Within this opening you’ll find:

1. A likable or compelling protagonist
2. An interesting initial problem to solve
3. What life is like for the protagonist
4. The introduction of the other major characters in the novel
5. The inciting event
6. The beginning’s crisis that triggers the protagonist to act toward resolving the core conflict of the novel

If you like to outline, you might break down your 12,500 words into chapters to get a feel for pacing and structure. To hit your 50,000-word mark, you’ll need to write 1667 words a day, so let’s say you’re aiming for a chapter a day. That would give you 30 chapters at the end of the month, a reasonable amount for your average 60-80,000 novel. (Adjust accordingly to fit your own novel based on what your typical chapter length is).

In those first seven to eight chapters (or however many you use), you’ll want to accomplish everything on the above list (and then some).

There’s a good chance the beginning of the novel will unfold roughly like this:

Let’s look a little closer at that overview:


This is the first thing your reader will discover about your book, your protagonist, and your world. Great first lines are important, but they can bog you down if you’re trying to craft the perfect one. For NaNo, don’t worry about it. (or start thinking now so you’re all set come November 1st). You can check off numbers 1-3 in your opening scene alone. Look for a scene that A) fits the world and shows what life is like for your protagonist, B) shows the protagonist exhibiting some likable or compelling trait, and C) puts the protagonist in a situation just before they need to act. Acting (as well as action) is critical here, as you want your protagonist to be driving the story, not just having stuff happen to them.

Introduction of the protagonist


Odds are your opening scene will introduce your protagonist, but if not, then you’ll have a scene where they are introduced. If there’s something critical to their character the reader needs to know, this is a great place to put it.

Introduction of world and setting


The opening chapters are where you’ll define the world for your readers. A lot of the critical world building and setting will be in that first chapter. Even if your world is downtown Manhattan, you’ll be showing readers downtown Manhattan. Think about how your protagonist sees this world when you’re wondering what details to use. There’s a good chance you’ll start hinting at or stating outright  your theme here as well. Setting is also a common place to set the tone for your story. However you choose to write it, make sure you're using good setup to lay the groundwork for the novel, not bad setup where you're just telling readers "stuff they need to know" before they get to the good parts.


When the story opens, something is happening--there's some kind of problem the protagonist is facing. It doesn’t have to be high drama or fast-paced action, but there should be a sense that something is in the works and going on. This is a good spot to show your world and how your protagonist fits into it, because your opening problem doesn’t have to be part of your core conflict. It can be something inherent to the world your protagonist lives in that somehow gets them to that inciting event and/or core conflict. Being chased by monster. Dodging a nasty boss. Arguing with your ex-spouse. Whatever is a typical issue for your protagonist.


This is going to be the first goal your protagonist tries to solve and it gets the novel started with something to hook readers (beware of making these goals too vague--it's often hard to plot with those). There’s also a good chance this problem will lead to the inciting event or the first major crisis (if it didn't contain the inciting event). Look for ways to set your protagonist on the plot path, using this problem as a bridge to get to the rest of your story.


If the problem is solved without hassle, it’s probably not the right problem to open your novel with. Goals, conflicts and stakes are what drives your story forward, so look at every scene as a stepping stone to the next part of the plot. What goes wrong for your protagonist when they try to solve that first problem? Why does it matter? And remember, it doesn’t have to be action. It can be quiet if your story calls for it. As long as there’s a hook to keep readers reading.

Protagonist reacts and makes a decision


Here’s your protagonist’s goal for the next part. Stuff happens to them and they do something about it. What they do will move you to your next scene. Wash, rinse repeat. This is a great time to introduce your primary character arc and show how the external goal is going to conflict with the protagonist’s internal desires. You might even let that internal issue be the thing that causes them to fail when they hit the first major crisis.


Your major secondary characters will show up in the beginning, and the antagonist (or the effects of the antagonist) will at least be mentioned, even if we don’t see them. If your protagonist doesn’t know your antagonist, they'll probably at least know what problem that antagonist is putting in their path. There will be hints of where the bad guy is going to come from. Subplots will likely appear during this time that cause conflict between what the protagonist needs to do and what they want to do.


This will be the start of the beginning’s end, likely the final chapter before we close on the first major crisis. The protagonist is trying to solve whatever problems you’ve thrown at them, and they’ll either cause something big to happen, or discover something big is happening. Even if they don’t know for sure what it is, they’ll take the first step toward knowing there is a problem—and a bad one. Your stakes will likely go up here as well.

Protagonist decides to act in a big way


What they do next determines how you’ll start the middle. This will be a goal that puts your protagonist on the path to the core conflict, not a subplot. It’ll pose a question of some type for the reader (not always a literal question, but one they can wonder about, like, “will they get the girl back?” or “can they build that spaceship in time?”) This goal will be a major part of the middle’s beginning.

Next, we’ll do an overview of the middle of the novel.

Anything not covered here you have questions about? What are some of your goals for your novel’s beginning?