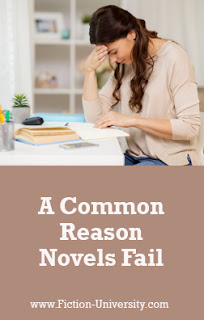 Discovering your novel doesn’t work is heartbreaking, but there are things you can do to fix it.

Story ideas are wonderful things, because they hold so much potential. Every spark of inspiration has the ability to become the next Great Novel and make a writer’s whole career. Or at least lead to a solid book readers might want to buy.

Not all ideas lead to good books, though.

Sometimes it’s the idea itself that’s the problem, but frequently, it’s the execution—but not in a “badly written” kind of way. The reason the idea (and the novel) falls flat is this:

It doesn’t tell a story, it explains a situation.

The “situation novel” isn’t about characters trying to solve problems, but scene after scene that tells readers how a situation occurs, offers a flat, play-by-play of how something came to be, or even examples of why this idea is so cool.

The kicker is that the idea is often a good one. The writing might even be good, and the plot decent. What’s missing is the story behind it.

(Here’s more on Whose Story is It?)

If you’re struggling with a good book that’s going nowhere and you don’t know why, ask yourself the following questions:

How would you describe the plot?


Situation novels descriptions typically focus on the situation, not the character with a problem. For example, you might say:
Any of these situations could make great books, but notice how none of them show a protagonist trying to solve a problem. If you can rephrase them to show a protagonist with a problem then you’re probably fine. But if you can’t, there’s a good chance you have a situation novel on you hand (or a premise novel, which is very similar--a premise novel is idea without plot, a situation novel is plot without a compelling point).

(Here’s more on Is Your Novel All Premise and No Plot?)

Is your protagonist trying to solve a problem? 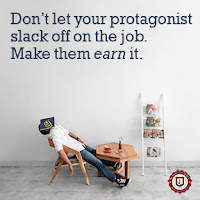 Protagonists drive the plot, and situation novels often read like a series of connected scenes with no one in the the narrative driver’s seat. There’s probably a problem in the novel, likely something major, but if you took the protagonist out, pretty much any other character could step in and not much (if anything at all) would change in the story.

In a situation novel, the novel’s problem isn’t personal to the protagonist, or it's vaguely personal, such as “the end of the world” or “they might die” or some generic bad thing that will happen to everyone in the book.

(Here’s more on Birth of a Book: The Idea Stage: Clarifying the Idea)

Does your novel have a lot of point of view characters?

It’s essentially showing all the details and sides of a situation, and how it’s all unfolding, and what’s going on when, but there’s no sense of a character trying to accomplish anything on a large scale. The scenes might have goals, but the goals are there primarily to show the steps leading to the resolution of the situation and aren’t part of a character’s plan to deal with that situation.

Consider each point of view character and ask what would happen if you cut that character from the story. How much would change? If the only change is that you’d need someone else to show those scenes, odds are you have more situation than story in your novel.

(Here’s more on Lost in the Crowd: Working With Multiple Point of View Characters)

Do the characters make plot-determining decisions based on personal motivations?

Plots are created by choices, and those choices are motivated by personal reasons. Even the detective trying to solve a murder is doing it because it’s her job and she believes in what she does. But for most protagonists, what they do stems from a need to accomplish a goal that helps them get what they want in some way.

Does the ending resolve the problem introduced at the start of the story?


This one is tricky, because often the answer is “Yes.” But only at first glance. Yes, they stop the curse. Yes, they deal with their grief. Yes, they escape the puzzle room.

However, when we look closer, we realize that any character dropped into the same situation would have resolved the same problem. The people in it don’t matter, it’s the situation that matters. Even more, the entire book was how that situation was resolved. It’s not really a story but scene after scene saying:
It can be subtle, but in a situation novel, it’s all about showing how that situation unfolds and how it works itself out, not about how the people in the story solve a problem that situation creates.

(Here’s more on The End is Near: What Makes a Good Ending?) 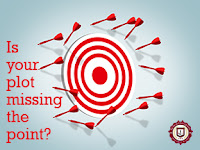 And that's really the big difference with a situation novel. The steps needed to resolve the situation are so cleanly and predictably laid out that there's never any doubt in readers' minds how the novel will unfold.
There are exceptions to everything, so you will find novels from time to time (and in some genres, such as hard science fiction) that do explore an idea and that's the whole point. But in these novels, the situation itself typically has many layers and the approach is about showing various aspects of that idea. It's not, "This is how X happened."

(Here's more on The Difference Between Idea, Premise, Plot, and Story)

Great novels are more than just great writing, or even having a great idea. The storytelling is a big part of them, and you can’t tell a story without characters. As my high school writing teacher used to say, stories are about interesting people solving interesting problems in interesting ways. I’ve said that countless times here, and in my workshops, but it’s true.

Find the problem in your novel’s situation and give it to the right character to solve. Then you’ll have a great story to go with it.

Have you ever written a situation novel? Read one?

Need help revising a situation or premise novel? Get all three Fixing Your Revision Problems books in one omnibus!