The Hardest Craft of All: Writing with a Block 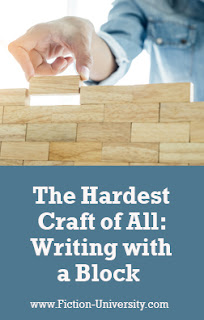 JH: There’s a myriad of reasons why someone suddenly can’t write, but they all result in the same thing—frustration. Spencer Ellsworth visits the lecture hall today to share tips on writing when you have a lot going on in your life.

Spencer Ellsworth has been writing since he learned how. He is the author of The Great Faerie Strike, out in August 2019 from Broken Eye Books, and the Starfire Trilogy of space opera novels from Tor. He lives in Bellingham, WA, with his wife and three children, writes, edits and works at a small tribal college, and would really like a war mammoth if you’ve got one lying around.


The fastest way to start a fight in a bar full of writers is with the following sentence: “I have writer’s block.”

Joe Tough-It-Out will put down his beer or whiskey sours and declare, “There’s no such goddamn thing! Do plumbers get plumbers’ block?” Ms. HippieTastic EarthHeart will put down her white wine and opine that perhaps you need to get in touch with what you really want to say. Another friend might try to help by saying, “Do you really need to write? Maybe it’s better that it’s gone. The field is so crowded…”

Also, these days, about seven people will volunteer their paid services as “special writing coaches.” One will creepy-touch your leg. Then you’ll throw your drink in a face, and aforementioned Joe will take any excuse to throw a punch, and—see? Fight!

Writer’s block is a controversial topic, but we’ve all felt it. You sit down at the computer to write and an hour later there’s nothing.

Nothing but… a block.

A blank shape taking up room in your head.

You might feel depressed, you might be unable to get past a certain twist in your story, you might think of everything except writing, but we’ve all felt it.

And I wouldn’t be surprised to hear that, for many of us, block corresponds with some tough events in life. Grieving. Small kids. A new and stressful job, or an old job getting more and more stressful and no prospects for a new one.

All that life, and no escape into creativity. It becomes a depressing spiral. You should be writing. All your writer friends are writing. You beat yourself up for not writing, and then you hate writing even more, because it comes with all that guilt!

If you love writing but can’t seem to do it, you are okay.

(Here's more on What to Do When Your Writing Stalls Out)

Behold, I give unto thee the Parable of LogicPro:

I like to record music. It’s a profession that’s even harder to succeed in than writing, so it’s a nice side hobby since I have no hope of ever making a profit. My recording software of choice is Logic, and very often I’ve finished a project in Logic and started exporting. Then I try to do something else while Logic is exporting. I’m impatient. I both want to hear the final, exported version and be entertained during the two minutes or so it takes to export.

So I crack open YouTube to watch a 2-minute SNL sketch. Wouldn’t you?

Of course, recording software takes up a big chunk of computer memory, so even in 2019, while Logic exports my song, my YouTube video lags. A lot of the fundamental memory and functions used by Logic are too strained for my computer to also show me the latest Dumb Trump Headline Cold Open.

This is a lot like trying to write through major life changes, grief, or stress. Your “processing power” is dealing with your life events. When you try to summon your creativity, the little gears in your head turn in favor of other stuff.

Your brain is saying that in your writing time, you really need to hike, kayak, go to a concert, have a game night. Live. And put some Story into your head instead of always trying to extract it. Binge some TV, read some books, and let it marinate. Let the brain finish processing

If you must write, take it in tiny chunks. Write a little scenelet and toss it. Do some exercises with friends for flash fiction, in timed writing intervals. Use your devoted writing time to read. Don’t expect yourself to finish a big project.

Respect the hustle and keep submitting what you have already written, but kick away the guilt that says should have more original material.

About The Great Faerie Strike