Birth of a Book: The Idea Stage: Testing the Idea 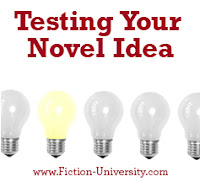 In this series, I’ve been analyzing the early stages of writing a novel. Part One is the Idea Stage, focusing on my own four-step process of developing an idea enough to turn that idea into an actual novel. First, we went through step one of the process, The Inspirational Spark. Then, we discussed Brainstorming the Idea. Last week, we brainstormed and Clarified the Idea. Today, we’ll wrap it up with ways to test our idea.


Not all ideas are created equal, even the good ones. An idea might sound fantastic when you talk about it, but when you try to put it on paper it stalls and lies there like a rock. I’ve learned this happens most often when I have a terrific premise, but no actual story yet. Sure, it’s a great concept for a novel, but it’s lacking the necessary pieces to make it a novel.

Problem is, it’s not always easy to tell a great idea from a great premise in these early stages.

Clarifying the idea usually catches the “premise not plot” concepts before they get too far, but sometimes an idea slips by that absolutely fools me into thinking it’s ready when it’s not. More often than not, it’s the super-exciting, bright and shiny idea I’m dying to work on, and I ignore those little red flags that tell me to slow down and think about this first. I get caught up in the idea and want to write it.

These sneaky little “write me, write me!” ideas are why I like to test the idea and make sure it has the legs to carry a whole novel. My favorite and most effective tool for doing this is…

To write a query blurb.

Some are you are cringing, and I apologize. I know query letters aren’t fun for most writers, and they often drive us crazy and break our hearts, but they also force us to pinpoint all the necessary core elements of a novel. They’re useful, even if you hate writing them.

To test my idea, I go through a series of brainstorming questions first, then write my blurb in the classic query format (I refer to this exercise as “the summary blurb” in my Planning Your Novel book, but it’s the same thing).


I start with the protagonist and the goal to fully understand the core of my story:

Why does the protagonist want it? This is the motivation behind pretty much everything the protagonist is going to do all book. There has to be a reason why she trying to achieve this goal, even if it’s just to get paid.

2. Why does it matter that this problem is resolved?


Stakes comes next so I know why this goal needs to be met:

How will her life change if she does or doesn’t get it? This covers the stakes and the consequence for not achieving this goal. The more personal the better, so even if your stakes are “to save the world,” make sure there’s also a person reason why the protagonist wants to save it aside from death.

(Here’s more on getting to the heart of your story)

3. What is the main problem to be faced?


Then I examine the conflict and hook to make sure there’s enough of a problem to oppose the goal and enough interest to hook readers:

What’s the conflict? This covers the main challenge preventing the protagonist from the goal. In nearly all premise novels, this is missing—there is no conflict to be overcome, so there’s nothing for the protagonist to work against, and thus no plot.

What the intellectual hook? What’s interesting about this idea that will make people want to read it? This helps me determine if my idea is original enough to stand out.

What the emotional hook? What will tug at readers’ heartstrings and make them care about this story? Often, this is the internal conflict or character arc of the story.

4. Where does the novel take place?


Next I look at the setting so I know where and when this story takes place:

What’s the best setting for this idea? Since the setting often plays a strong role in the story, it’s helpful to have an idea of where the story will happen. You don’t need every detail at this point, but it’s good to know if it’s a small town or a made up world, and why this location matters to the story. If the setting doesn’t matter, that’s a red flag you’re missing an opportunity to create a stronger story by setting it somewhere that reflects or enhances that story.

(Here are ten questions to ask when choosing a setting)

5. What triggers the novel’s core problem?


After that, I move on to identifying the inciting event:

What triggers the start of this story? Something is going to start the protagonist onto the plot path—she didn’t just wake up one day and decide to do whatever the book wants her to do. This moment will cause the entire book to happen, so it’s pretty critical to understanding what the story is about. If you can’t say how the protagonist get into this mess (or whatever the problem is), then the idea isn’t ready yet.

(Here’s more on the inciting event)


And finally, I consider my ending and what I’m working toward:

How is this conflict and story resolved? This is the climax of the novel. I don’t always know the specifics of my endings at this stage, even if I do know generally what has to happen. “Catch or stop the bad guy” is usually all I have, and maybe some details on how. Depending on the type of writer you are, this could be enough to determine if you’re ready to write or not—many writers write the story to see how it ends, so knowing ahead of time steals the need to write it for them.

I’m not this type of writer. I’ve learned that the more I know about my ending going in, the easier it is to write the first draft and the fewer revisions I’ll need to reach the final draft. If you frequently stumble during the back half of your drafts and your story stalls, even when you “know” the ending, odds are this is why. Consider spending more time on your ending first and see if that helps.

Writing the Query (or Summary) Blurb


At this point, I have enough to write my blurb. It’s not fancy, and I’d never show it to an agent or anything, but it’s a vital tool in my process that has saved me time and time again from starting a project that wasn’t ready.

I’ve done this so often I actually enjoy the query blurb process now, but for those who need a little help getting started, here’s a handy template:

[Introduce the protagonist] is [tell a little about her] who [why she’s in the right place to have something happen to her]. She [what leads her to the inciting event] where [the inciting event happens].

She [reacts to what’s happened] and finds herself [how the inciting event has made a mess of the protagonist’s life]. To [fix this problem] she must [the main thing that needs to be accomplished to win] before [the antagonist does what she needs to do]. If she doesn’t, [why it’s bad, and what she has to lose if she fails].

You can shift these elements around as needed, but if this is something you struggle with, I’d suggest sticking to the template until you get the hang of it. Blurbs usually take time to get into the rhythm of writing them, but once you do, you’ll be able to whip them out without a lot of effort.

(Here’s more on using the query as a plotting tool)

Is The Idea Ready to Write?


After all of this, I decide if I’m ready to move on to developing the idea into a full-fledged story. I’m still a ways off from writing it (pantsers might be ready now, though), and the next stage is story development. For me, that’s working up the characters and setting, and outlining and summarizing the entire novel (another four steps, coincidentally enough).

I hope you’ve enjoyed Stage One of the Early Stages of a Novel Series. We’ll start on Stage Two: Story Development next week.

Do you test your ideas before you write them? Have you ever written a query or summary blurb first?