Three Words That Are Killing Your Manuscript 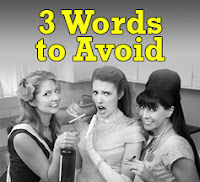 There are no bad words in writing, but there are some that like to hang around with unsavory prose and encourage us to be lazy writers. They want us to take shortcuts, expect our readers to know what we meant to say, and whisper in our ears that the rest of our writing isn’t good enough to get our ideas across.

It’s not their fault, they just want to be helpful, but they don’t realize that good writing comes from strong words, not shortcuts and half measures. They have no idea they're killing your manuscript and mucking up your story. Sometimes they step up and do their job, but more often than not, revising to eliminate them from your manuscript is best for everyone.

Suddenly thinks it’s helping you create tension and shock, but it’s telegraphing the surprise and ruining the moment. As soon as readers see it, they know to brace themselves and hold on, so whatever happens next isn’t as impactful as you’d hoped. Suddenly also enjoys melodrama, so your emotional and unexpected moment ends up feeling like an old black and white movie serial from the 30s.

Suddenly likes backup, so it frequently brings its pal when along to get readers attention and make them look. Together, they make a mess and turn good prose into told prose.


Bob was sneaking along the edge of the building, when suddenly, three zombies charged out of the bushes.

It’s a good try, but no reader is going to be surprised by that. There’s no tension, no buildup, and nothing to make them gasp in shock.

(Here’s more on telegraphing the plot)


Because likes to explain the joke before readers have a chance to laugh. It thinks it knows everything and wants to share that knowledge, but it’s not malicious. Just a little needy.

Because has a good heart, and it wants your readers to fully understand what’s going on and why it’s happening. But it doesn’t realize that readers don’t want every situation explained to them. They want the mystery of why the best friend is acting squirrelly, they want to figure out why everyone is wearing gloves, they want to realize three chapters later that a seemingly innocent mistake was a clever ploy to mislead the protagonist.


Jane paused outside the room, because Bob was in there alone and she wasn’t sure she wanted to talk to him right now.

It’s more fun to let Jane pause, act oddly and walk away, so readers can wonder why she doesn’t want to be alone with Bob.


Knew is a busybody. It likes to give away all your character’s secrets and share every little thought that goes through their heads to the world. It doesn’t let your characters hide behind ambiguity, it butts in and tells readers exactly what they know and leaves nothing for readers to wonder about.

Knew often prods because into trouble, revealing what a character knows just so because will jump in and say “I know how!” Knew has a bit of an attitude problem and likes to get other words into trouble.


Sally knew what was going on between Bob and Jane, it was so obvious.

Sally knew what was going on between Bob and Jane, because Bob acted like a kid with a crush whenever he saw her.

(Here’s more on spotting motivational tells in your writing)

All three of these words think they’re helping you write a great story, so it’s okay if you want to be nice and let them hang around during the first draft. But when it’s time to get serious and revise that draft, politely tell them it’s time to go home.

How often does suddenly, because, or knew try to muck up your manuscript?