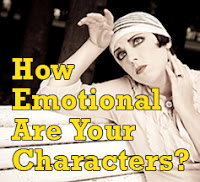 I recently finished reading an excellent novel; the setting was unusual and drawn with such authentic detail I was captivated. The mystery was just the right shade of murky, and the atmosphere! Wow. I am sure I have never read a book that was able to stay within such a dark and dismal tone from wire to wire. It was so well done that I was shocked, actually, at how the protagonist completely lost me. Deeply flawed and saddled with (atypical) horrors from her past, this character struggled through every situation and I wanted, so badly, to root for her, but…she had one range of emotion: dreary. She was dreary when she worked. Dreary when she discovered clues. Dreary when other characters tried—valiantly—to befriend her. She was dreary when she made love.

I reflected a long time on why she just didn’t fly for me; after all, she was extraordinarily interesting and absolutely a character we’d all kill to have created, she was deeply layered with experiences and flaws and talents and thoughts. And every single thing that happened to her could easily account for the way she was and yet…yet my suspension of disbelief just couldn’t buy her. But why? It drove me crazy and I thought I was being unreasonably critical until a remembered quote summed it up. Remember the old movie Sling Blade? Billy Bob Thornton’s simple-minded character, Karl Childers, made the following statement about the deformed newborn brother his floozy mother left to die, defending the tiny mite’s right to live despite what would be vast limitations: “He still would have laughed sometimes,” said Karl.

He still would have laughed sometimes. Because everyone, no matter how damaged, broken, or flawed, will nonetheless have moments of joy and wonder and fun. Or anger, disbelief, and disappointment. Human beings experience a spectrum of emotions regardless of their circumstances—and that was why the character in the aforementioned novel fell flat for me. For all her damage and emotional disabilities, she in turn lacked realistic dimension because she never stepped out of the monochromatic mood she was in. Ever. And that’s not only unrealistic, it is impossible.

As a writer it made me think. Which characters did I have who were:

Can you think of any other examples—perhaps from your own work or a piece of fiction you’ve read?

How about the opposite example—a character who is deeply drawn as being _____ (fill in the blank) whose mood tenor becomes even more glaring because they have the odd moment of antithesis?

’Cause after all, I don’t think the character in question needs to be all over the map with feelings—but I do think they need to look like someone who is more than a robot, yet less like an Average Joe (or Josephine, respectively). Heck, even Voldemort laughed the odd time (albeit over things that made gallows humor look like appropriate dinner conversation. But still)

Bottom line: emotionally tone-deaf characters are not human, and characters need to be authentic in order for readers to connect with them in a way that will make them want to hang out for 300-or so pages of prose.