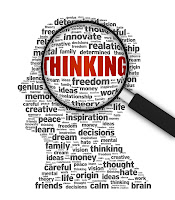 Getting inside a character's head is a key element to getting the reader to care about that character--love them, hate them, fear them, whatever the emotion you want to evoke. In first person this is easy, because you're already so close to their perspective the thoughts roll naturally into the story. With third person it can be more challenging, because there's an extra layer between the character and the reader. The narrative distance often determines how your internalization will sound.

(For a refresher on narrative distance, try this post.)

A close narrative distance will make the internalization feel similar to first person (without the "I" of course). A more distant one will include tags like he thought. Some will use italics, others will make it part of the narrative. The style is up to you.

(If you're unsure which to choose, here are some tips that might help.)

Today it's all about a tight third that sounds natural without using "he thought" style tags.

Let's check in with Bob and the Zombies for some examples.

Bob eyed the Quickie Mart, his fingers tight around the shotgun. What a death trap. One entrance, crappy visibility, way too many things to snag your ass. He scoffed and wiped his upper lip. Get dinner or be dinner. Lousy options in a lousy world.

What makes this feel close is that both the action and Bob's thoughts are written the same way. Third person, showing the "action." What Bob does and what Bob thinks. The thoughts are in his voice, and you can easily hear Bob saying this. Compare this to the same paragraph without his voice to show that these are his thoughts.


Bob eyed the Quickie Mart, his fingers tight around the shotgun. The store was a death trap. It had only one entrance, poor visibility, and multiple things to get hung up on. He scoffed and wiped his upper lip. His choice: get dinner or be dinner. Lousy options in a lousy world.

Hear the difference? The internalization doesn't sound like someone thinking anymore, it sounds more like bland description of general thoughts. But tight internalization isn't all guesswork. I used a few tricks to make that close third feel that close.

Bob eyed the Quickie Mart, his fingers tight around the shotgun. Establish the POV character and show them doing something. This signals to the reader that this is inside Bob's head. What a death trap. This thought sounds like dialog, which signals "Bob is thinking this" to the reader. One entrance, crappy visibility, way too many things to snag your ass. Note the word choice: crappy, way too many, snag your ass. Specific words to convey Bob's character, and it also reinforces the "what a death trap" tone. It's clear this is still Bob thinking. He scoffed and wiped his upper lip. One way to clue readers in on an internal thought is to bring their attention to the character's head. Bob wipes his lip. Touches his face. This signals "I'm in Bob's head" so the next line feels like his thought. Also notice I had Bob "eye" the store in the first line as well. Get dinner or be dinner. Lousy options in a lousy world. Thoughts in his voice. Lousy options could go either way, but when paired with clear voice and tight internalization, it sounds like Bob thinking instead of a description or statement.

1. Keep it in the character's voice

This is key to crafting natural-sounding internal thoughts. Use their words, their opinions, their style. If they'd never in a million years use the word "cacophony," don't have them think about a cacophony of sounds to describe something.

2. Stay in the same tense as the rest of your narrative

Internalization isn't like an emphasized internal thought where you italicize it. Those are often in present tense even if the rest is in past tense. Stick to whatever tense you're using so it flows.

People don't think in full sentences. They drop words, use slang, use sentence fragments, break off in mid-thought. Be true to the character and how they'd think. If they're crass, let them be crass. If they're flowery and deliberate, let them think that way.

4. Mix the physical and the mental

Just like that touching your head trick, a mix of character action and thought usually feels the most natural. People think and do at the same time. Long passages of action feels detached and impersonal. Long passages of thought often grind the pace to a halt. Mixing the two keeps the pace moving and maintains the personal connection to the reader.

People react to things. These are usually the right spots to add in internalization. Something jumps out at you, you get startled. Something hurts you, you cry out. If something happens to cause your character to react, consider what they'd think, say, and do, not just one of those. Pick the aspects that will best show the character and the story. A line of dialog and an action might work best, or a thought and dialog, or even just the action. Sometimes all three. Don't be afraid to play and see which sounds best.

(For a more in depth study of internalization, try this post.)

Good internalization brings life to your characters and your story. It helps show that all-important voice and lets readers see the soul behind the words.

How do you feel about internalization? Which type do you prefer? Tight? Distant? Tagged or untagged?