An Easy Fix for a Tighter Point of View 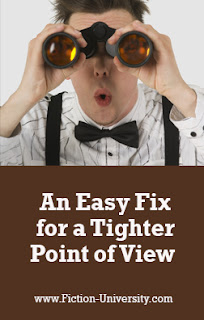 You might be inadvertently pushing your readers away from your novel.

Decades ago, a detached, omniscient point of view was all the rage.

Readers wanted to be told a story, so the stories read as if someone was indeed telling them. That style faded as readers sought a more immersive read, and tighter points of view became popular. The pendulum keeps swinging, and these days, readers read on both sides of the narrative fence.

What does this have to do with point of you, you ask?

Because narrative distance is what makes the different point of view styles feel different.

Regardless of who the narrator is, that’s the “person” readers experience the novel through. A tight first-person narrator, an omniscient third, a limited third, it’s all filtered through somebody’s eyes—their point of view (POV).

How thick a filter you use determines the narrative distance, which in turn, shapes the point of view for the novel.

What adds this layer? 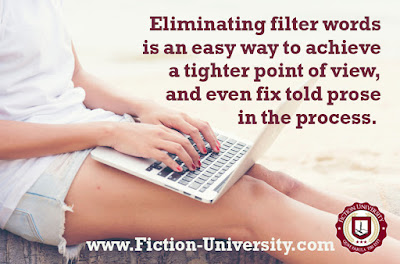 Writers put a lot of effort into drawing readers into our novels, so why use words that push them away?

Filter words remind readers they’re reading. They explain details that are clear, and often lead a writer into telling. Even worse, filter words are frequently found with their passive, telling cousins, pushing readers even further away from the story and characters. If readers stray too far, they’ll set the novel aside and look for something else to read.

Narrative distance and point of view is a sliding scale, and there is no wrong or right distance here. Readers enjoy both sides of the scale, and writers can write both, and do it equally well (and equally bad) in any point of view style.

If you’re a full omniscient, distant narrator kinda writer, this post probably isn’t for you, unless you’re just curious how the other side does it.

If you’re looking for a tighter and more immersive point of view experience for your readers, eliminate the redundant filter words.

Words such as, saw, heard, felt, knew, watched, and looked.

These words often make readers feel detached from the point of view, because they explain that a character saw or heard something, they don’t show it. And often, the narrative goes right ahead and shows it anyway.

Lisa wandered through the field and saw three crows sitting on the fence. She looked on as their black feathers glistened in the morning sunshine. Aren’t they pretty? she thought with a smile. She heard them caw the way crows do, and watched them take flight and soar across the bright, blue sky.

See the filter words? Saw. Looked on. Heard. Watched. Thought. Most of the action in this paragraph described what Lisa saw and heard, so we didn’t need to be told she saw and heard it.

This holds true for first person as well as third, and it actually sounds more detached since first person is such a tight point of view. For example:

I heard cars whooshing past. The sound of horns blared against my ears, muffled by morning fog so thick I could swim through it. It felt cold and clammy, sticking to my skin like a layer of wet cloth. It smelled musty, though I knew fog couldn’t possibly be musty.

Notice the extra layer? The character is relaying information in a detached, after the fact, watching-me-do-this tone. There’s a feeling of an outside person describing what the character sees and hears rather than experiencing the same things through that character’s senses.

Point of view characters by definition are relaying everything they sense, say, and think. If it’s described, readers know the character experienced it in some way. It’s like saying, I’m going to look at something, and now I’m telling you what I looked at.

(Here’s more on How Far is Too Far? Far Narrative Distance vs Telling)

Let’s take out those filter words and see what happens:

Lisa wandered through the field. Three crows sat on the fence, their black feathers glistening in the morning sunshine. She smiled. They’re so pretty. They cawed the way crows do, then took flight and soared across the bright, blue sky.

Cars whooshed past me, their blaring horns muffled by morning fog so thick I could swim through it. It slid cold and clammy against my skin like wet cloth—musty, though fog couldn’t possibly be musty.

Now the point of view characters are describing what they experience without telling readers that they’re looking or hearing or smelling. Readers feel closer to the character, and can imagine themselves in the story instead of watching the story from afar.
In the third-person example, you could get even closer just by adding some internal thought to more firmly establish this in her head.

Lisa wandered through the field. You didn't get views like this in the Bronx. Three crows sat on a fence ahead of her, their black feathers glistening in the morning sunshine. She smiled. They’re so pretty. They cawed the way crows do, then took flight and soared across the bright, blue sky. Chase your dreams, little guys.

(Here’s more on Keeping Your Distance: How Narrative Distance Works in Your Novel)

Eliminating filter words is an easy way to achieve a tighter point of view, and even fix told prose in the process.

EXERCISE FOR YOU: Take five minutes and check one scene for filter words. If you find some, determine if they’re pushing readers away, or keeping them right where you want them, narratively speaking. Edit as you see fit to achieve the narrative distance you want.

Do you prefer a tight or a distant point of view? Why? What about it captures you as a reader?

*Originally published January 2013 on WITS . Last updated January 2021.
Find out more about characters, internalization, and point of view in my book, Fixing Your Character & Point-of-View Problems.