How to Write More in Less Time with Voice Recognition 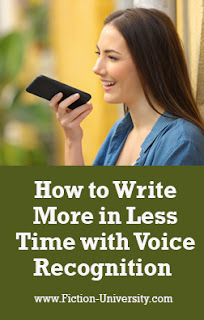 By Jenna Harte
Part of The Writer's Life Series
JH: As dictation software has gotten better, more and more writers are using it to increase their productivity. Jenna Harte shares tips and advice on how to start "speaking" your book
Jenna Harte is a fan of romance and murder, usually mixed together. She is the author of the Valentine Mysteries, the first of which, Deadly Valentine, reached the quarter-finals in Amazon's Breakthrough Novel Award in 2013. She’s also the author of the Sophie Parker Coupon Mystery Series and the Southern Heat contemporary romance series. She owns SwoonworthyHEA.com an online community for people who love to read and write romance, and is the host of Illicit Liaisons, where each week she and her guests discuss the good, the bad and the naughty of romance fiction. She is currently launching Write with Harte, a podcast and other resources for romance authors. When she’s not writing about passion or murder, she lives in central Virginia with her husband, and geriatric cat, Peaches. Keep up-to-date on all the passion and mayhem at her website.

I know what you’re thinking. Voice recognition is too awkward, too slow, too disruptive to creative flow. I thought the same thing. But then a repetitive strain injury in my fingers forced me to switch to voice recognition.
Almost immediately, I doubled my writing output.
If that sounds intriguing, read on, because I’m going to share what I’ve learned about voice recognition, and how it’s changed my life.

Why are you resistant to voice recognition?

I dismissed voice recognition the few times writers suggested it to me, because:

1. It's awkward to speak a book

2. The work wouldn’t be as good or creative

3. Speaking interrupts the flow of ideas

4. I’d have to remember to speak punctuation commands

What I discovered about voice recognition is that I got over the awkwardness, the work is just as good, the words still flow, speaking punctuation is as natural as typing it, and, as I already mentioned, it’s faster.

Why you should consider voice recognition in writing your book.

I won't deny that there aren't issues with voice recognition. It's not perfect, and it requires an adjustment to make the switch from typing to speaking. But there are several reasons why you might want to consider making the switch.

1. Increase your output.
When I researched voice recognition for authors, I found some writers who reported “writing” 5,000 per hour. While I’m closer to 3,500 per hour (including revision), that’s still twice as much as when I type. Imagine spending the same amount of time writing as you are now, but doubling your output.

2. Spend less time sitting.
Unless you have a standing desk, odds are you sit to write. With voice recognition, you can stand or even move around, depending on your microphone set up.
If you're like me, and some of your best ideas come when you're doing a mindless activity like walking or driving, the ability to move around a little bit while you're dictating can be helpful.
In fact, I went ahead and bought voice recognition software that included transcription. Now I'm able to record my writing while taking a walk outside or driving my car, and the software transcribes the digital recording.
For me this is been the biggest game changer. I love not being not having to sit at my desk for three or four hours to write.
(Here's more on Getting Started With Dictation)

How to switch from typing to voice recognition.

Here are the tools and resources needed for voice recognition:

Voice Recognition Software: I started out using speech recognition that came with Windows 10, but it was slow and clunky. During my research, Nuance’s Dragon’s Naturally Speaking was rated the best by other authors.
It’s not perfect, but there are actions to make it less wonky. This software isn’t cheap ($150 Home), especially if you want the version that includes dictation and transcription ($300 Professional Individual). I would argue that it was the best $300 I spent last year. Plus, if your writing earns money as a hobby or business, you might be able to deduct the cost on your taxes.

Microphone: The quality of the voice input does make a difference. There are headsets you can buy or external microphones like podcasters use. If you’re recording dictation, you can use your phone.
There are many free and low-cost voice recording apps, such as Easy Voice Recorder. I bought a Sony digital recorder that has the USB in the device, so I can record and then plug it into my computer for transcription. I use my phone to refer to my plot.

Word Processing: The software works with Word, but it can get glitchy. When I’m dictating directly to the page, I use Notepad (Windows), and then copy and paste into Word. For Scrivener users, you’ll need to go into your Dragon Tools and Options to click “Use the Dictation Box for unsupported applications” to dictate directly into the software. Otherwise, Dragon will open a text box with your diction within Scrivener.

Once you have all your equipment, the next step is learning how to speak your book.

There are many resources that advise you to “train your Dragon” in terms of training the software to understand you. But in my experience, it’s the speaker that needs training.
Here are tips that I recommend from my own experience adapting to voice recognition:

1. Speak a slower than you think you need to.
This may seem counterintuitive to writing faster, but in fact the slower you speak, the better the software can understand you or the transcription of the digital recording you provide.
Scott Baker has several books on voice recognition for authors. In one, he asks the reader to read a short passage in a minute and half. The first time I read it in 30 seconds. I was surprised at how slow he was suggesting we talk, but he indicated that the speed was the equivalent of 5,000 words an hour.

2. Enunciate.
The software is surprisingly accurate when it comes to homonyms, but it can get confused. The better you enunciate, the easier the software can understand not just the word, but its use in context so that it selects the right one (i.e., its, it’s).
It’s not just individual words you need to be clear on. I’ve had some situations in which the software dictated a phrase I apparently said, but it wasn’t made up of the words I intended. I blame my poor speaking or being winded on my walk for the error.

3. Teach it the words it doesn’t know or normally use.
The software doesn’t naturally use swear words. It uses common name spellings, so if your version is different, you’d have to train it or use “find/replace” to change it. For example, if your character is Jon or Kellie, the software would likely use John or Kelly. If you’re writing a sci fi or fantasy with made up names, you can train the software to hear them, or use alternative names and use “find/replace” when revising.

4. Speak punctuation.
This is odd at first, but quickly becomes natural just like hitting the period key without thinking when you type. Nuance offers a cheat sheet (PDF) to help you. The most common commands I use are:

In the last two years, I’ve worked as a ghostwriter, cranking out over two million words. My fingers suffered as a result. Now with voice recognition, not only do I spare my fingers, but I write more in less time.
About Drawn to Her: Book One of the Southern Heat Series

He doesn't trust her, but he's powerless to resist her. He's...Drawn to Her. Feisty and outspoken, Lexie McKenna will do anything to protect her cantankerous and ailing patient--even if it means going up against his cold and calculating, but sexy and irresistible, grandson. After all, as a nurse, her number one priority is her patient. Drake Carmichael doesn't trust the nurse who's taking care of his grandfather--despite how adorable and compassionate she seems. He refuses to let her get her grips into their hard-earned money.

But as the two square off and begin to battle about what is best for the dying man, Lexie and Drake realize that first impressions are deceiving. Lexie discovers a warm, vulnerable man beneath cold, calculating armor, and Drake finds he's helpless against Lexie's gentle heart and beguiling smile. Once they finally give in to their desires, the battle has only just begin.
As the clash between family and fortune ignites, the love they both crave could burn to ash.