A 5-Minute Fix to Jump-start Your Scene 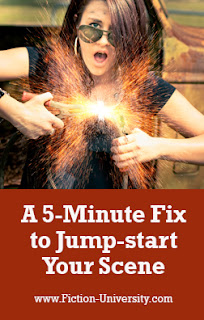 Even when I know what I want to write, I still have days where I struggle to get that first line down. Once I do, the words usually pick up speed and I slide into my scene and my writing sessions, but not always.

On those days, I write that first line, then delete it. Write it again, and hit the backspace key like a woodpecker on a tree. Eventually, I get up and make a cup of tea and start the whole process over again.

This happened a lot in my early writing days. It didn’t take long for me to realize there had to be a better way to start writing. I examined my process. Since I’m a plotter by nature, I sought answers there first.

Figure out what you want to write before you write it.

And yes, I totally agree this is one of those bits of advice that’s both helpful and terribly unhelpful at the same time. But it’s still valid, because this is why so many writers struggle with a new chapter or a new scene.

Maybe we see the chapter in our heads and know what we want to write, but just can’t start it. Or maybe we have a general sense of what the individual scenes in that chapter ought to cover, or there’s a line or two of dialogue ringing in our ears, or we know what the chapter it supposed to do for the story. We have all these concepts and ideas and no clear path on how to move forward.

What if I told you spending five minutes thinking about your chapter could make this whole process easier?

Sounds good, right? Five minutes of getting your thoughts in order and off you go. This holds true for pantsers and plotters, so even if you aren’t an outliner, it’s still useful.

Here’s how it works:

The time limit will force you to write fast and not think too long about the details. It’s just one chapter, it’s not the whole novel. Don’t over-think it, either.

Step 2: Write down what the chapter is about.

Just a quick summary, one or two sentences. How you do this is also up to you. Maybe you like descriptions of each scene, or prefer to list the GMC (goal, motivation, conflict) or maybe you let the character drive it.

If you’re not sure on some parts, leave yourself a note with the idea of what you want. For example:

The goal here is to write down a few lines to give you a framework and a guide to brainstorm with.

Jot down the basic arc of the chapter, individual scenes, or the events you know need to happen in it. I find a quick overview works well here—what the protagonist is trying to do, a sense of how, and if I know it, what goes wrong. For example:

Or if bullet points don’t work for you…

Evander leaves club, hits detour, gets lost, pulls over to set his GPS, sees woman from club with two big guys, hesitates about what to do, gets out and goes over, sees they aren’t big guys but demons, he hears them arguing over her soul, which freaks him out.

Do what works for you. For some, this might be all you need to dive in and start writing. But if you want more, you can move on to step four. 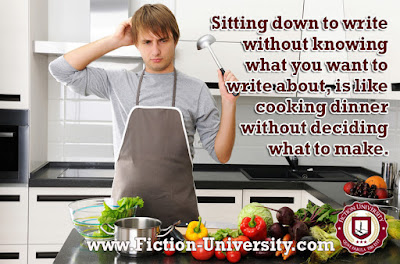 Step 4: Summarize until the timer goes off.

Summarize how the chapter will unfold. Use bits of dialogue if they come to you. Say why it matters. Drop in the clues or foreshadows that need to occur. Whatever details you need to understand before you write, in whatever format of shape that works for your process.

For example, here’s the actual summary I wrote for the opening scene of my novel, Blood Ties:

Grace is working with Daisy, when Nate shows up at the hospital. He watches for a bit, and Grace first thinks he's some do-gooder (subtle clue who he really is) there for Daisy. But he's looking for Grace because he found her name on a list of names in the home of someone who went missing in the last town she lived in (what he doesn't know is that her original name is there and Mom's name is on the list, crossed off). He acts like a cop (but never IDs himself as one). Grace wants to know who Nate is and how someone got her name. (notes are written next to names in Aramaic—looks like a cross between elven runes and Hebrew, note is vellum/scroll and old) Nate wants to put her under protective custody, but she says no. She has a common name, he can't be sure she's even the one on the list. She tries to get more info out of him about where he got it and why he thinks she's the right GH. He asks if she's given blood recently, which she finds weird, and she says no. This throws him a bit (all the victims he's found have given blood--but Grace was targeted through her dad), and he starts to doubt himself. He gives her a card, call him if she thinks of anything, etc. Daisy whines and Grace has to go. She wants to call Dad right away, but waits in case anyone is watching. (show how careful she is). She writes down the names on the list she remembers. Soon as she's done with Daisy, she cuts out to make a call.

I like to flesh out a scene before I write it, but you don’t have to go as detailed as I do here (or you can go even deeper if you prefer). Some of these details did change in the actual opening chapter, and I added other details as I wrote. So just because you write this summary doesn’t mean you have to stick to it 100%. It’s mostly to prime your creative pump and get the brain thinking about the chapter.

(Here’s more on Four Ways to Pre-Write Your Scenes)

Sitting down to write without knowing what you want to write about is like cooking dinner without deciding what to make.

Sure, you’ll figure it out eventually, but there’s no need to go through everything in the pantry or refrigerator to do it.

I start every writing session by reviewing my outline, then following these steps (I skip the timer part now, but I used it when I started doing this). I hash out my scene or chapter and figure out the plot mechanics and how the scenes unfold.
I often throw in a few dialogue exchanges for critical conversations, and make notes on motivations and why something matters. And I make sure to at least get an idea of how it ends and how one scene hands off to the next scene.

And I’m not the only one who does this. I discovered author Rachael Aaron uses this in her process, and it was instrumental in increasing her word count. She writes about the whole process in her awesome book, 2k to 10k: Writing Faster, Writing Better, and Writing More of What You Love.

Planning the chapter uses a different part of the brain than writing the chapter. Trying to do both at once yanks your muse in opposite directions.

And that’s just a mean thing to do to your poor muse.

EXERCISE FOR YOU: For the next week, take five minutes before each writing session and try this process. Give it a week to figure out what best works for you with your process, especially if you’re a pantser or you don’t care for outlining. Your jump-start might just be thinking about your chapter, not doing any actual writing.

Do you plan your chapter before you start writing or just dive in?
For more help on plotting or writing a novel check out my Plotting Your Novel: Ideas and Structure.