I'm Not Evil: Writing from the Antagonist's Point of View 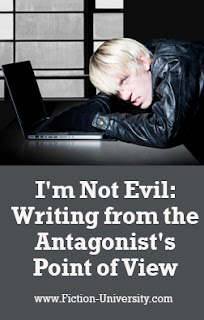 Should you write scenes in your antagonist's point of view? Maybe.

The first novel I ever wrote “for real” (with the intent to submit it to agents) used points of view from both the protagonists and the antagonists. It was one of those epic fantasy monstrosities with about twelve point of view characters and a backstory history I thought could become its own series (I shudder at the thought now).

This novel will never see the light of day, but it still has the best villains I ever wrote.

They were layered. They were compelling. They were interesting. But mostly? They were fun to both write and read about.

I had no idea what I was doing back then, so I think the reason they turned out so well was because I wrote from their perspectives. I had to know them to do that, so they became real people with real problems they were just trying to sort out, same as my protagonists.

When you walk a mile in your antagonist’s shoes, you have a much better understanding of who they are, what they want, and what they’re willing to do to get it.

Writing as the antagonist is a tricky point of view to do, because much of a novel's tension comes from readers wondering what's going to happen next. If they’re inside the mind of the antagonist, it can reveal too much too soon. This is exacerbated if the antagonist isn’t fleshed out enough, and their scenes read more like infodumps about what’s happening when the protagonist isn’t around than actual story.

How to Be Evil Without Turning Off Your Readers

Here are things to keep in mind when writing from the antagonist’s point of view:

Don’t give away the whole evil plan.

Unless it raises the tension. A great “antagonist-as-a-character” point of view keeps the outcome uncertain, but at the same time, shows why them winning is a very bad thing for the protagonist. It helps establish the stakes and what the protagonist needs to avoid. Some readers will even root for them a little.

If your antagonist is more “hints of dark things to come” than an actual character in the story, you might just show the bad things from their perspective. For example, a mystery might show the killer stalking and murdering their victims, or a thriller might show the terrorists preparing and transporting the bomb the heroes are trying to stop. In this case, less is more, and the scenes work as large clues or extended foreshadowing.

If your antagonist falls in between these two, you might show what’s driving the character to act, but stay a bit vague on exactly what they’re doing. Perhaps it focuses more on teasing what might happen, which creates worry or anticipation. Or, you might hint at things building in the background that readers haven't picked up on yet, laying the critical groundwork for events that will shock them later.

Keep the mystery in the story even though readers know both sides of it. 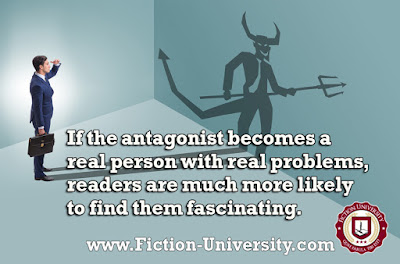 Remember, the antagonist is a person, too.

If the antagonist is important enough to get their own point of view, they ought to have goals and motives driving them, same as any other character. They’ll have reasons for acting that have nothing to do with the protagonist; the protagonist just happens to be in the wrong place at the wrong time. You might show why they’re against the protagonist or why they’re trying to achieve that goal.

One trick to writing a solid bad guy is to make them the hero of their own story. Few people actually consider themselves evil or bad, so even if there's a bit of conscience bugging them, they'll rationalize it same as your hero would. To them, the protagonist is the one getting in the way and messing things up. The protagonist is their villain.

If the antagonist becomes a real person with real problems, readers are much more likely to find them fascinating. And a bonus—since both sides (protagonist and antagonist) are fully developed characters driven by real motives, you’ll craft a stronger plot.

Develop a point-of-view-antagonist the same as you would the protagonist.

(Here's more on A First-Class Bad Guy: How X-Men Can Help You Craft a Better Antagonist)

Show what makes the antagonist tick.

One of the most masterful antagonist-point-of-view characters I’ve ever read is in Juliette Wade’s Mazes of Power. Nekantor is brilliantly written, but what Wade does best is show readers why Nek being Nek will lead to horrible, terrible things. He’s not a bad guy, but his perspective is, um, skewed. He’s a product of a not-so-great world, and it shows. You understand him, your heart breaks for him, and you dread him ever getting his way.
Let the antagonist's narrative and internalization reflect who they are.

It's easy to let your views about the antagonist color their scenes, because they’re the bad guy. Bad guys are bad, so you just focus on them "being evil" and turn them into a cardboard villain with no layers. That’s fine for a “monster” type antagonist, but the more you want readers to relate to or understand your antagonist, the more of a person you need to make them.

(Here’s more on 10 Traits of a Strong Antagonist)

EXERCISE FOR YOU: Take five or ten minutes and consider how using the antagonist’s point of view might affect your novel. Even if you know you don’t want to use it, think about their motives, their plan, and their actions over the course of the novel. Can you use any of that to deepen or enhance the plot? The story?