5 Questions to Turn a Character from Flat to Fabulous 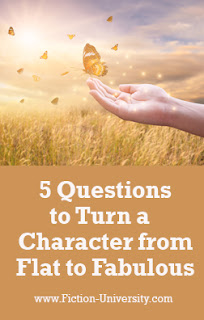 By Janice Hardy, @Janice_Hardy
Sometimes we just need a little help to create a memorable character.

Some writers develop incredibly detailed characters before they ever start a story.
I am not one of those writers.
I do the bare minimum necessary to create a character, then I throw them into my story and see what they do. By the time I’ve written the first draft, I know who they are and can revise accordingly.

Although I’ve written this way for decades, I’m not sure I’d recommend it. It’s an interesting tactic, but it has left me with a lot of revising I wouldn’t have needed if I’d done a bit more character work before I started writing.

Lately, I’ve wondered if I should change my process, or at the very least, add another layer of character creation at the start. Because I’ve always said that characters drive the plot, and I’m a plot-driven writer, so my process is missing a critical aspect when I think about it from that perspective.

It doesn’t take much effort to build a solid foundation for a character.

Yet there are plenty of writers like me, who ignore this side of the novel development stage. Our characters are flat, inconsistent, and their motives don’t always make sense. It takes multiple passes through a manuscript before we find out who they truly are, and if we don’t pay attention to the final version, they might still be a hot mess.

Luckily, science can help us craft well-developed characters with…

Psychologists over the last sixty years have broken personality down into five traits that influence how a person interacts with the world. These traits can help writers determine how our characters might interact with our story worlds.

The five traits are:

Creating a character is more than choosing a name and making a list of physical details. Who they are and how they act plays a stronger role in how a novel unfolds than what they look like. There are dozens of ways to develop the inner depths of a character, and one way is by understanding their personality.

If you’re looking for a fun and easy way to create characters, or flesh out the characters you have, here are five questions to ask:

1. How do they face new experiences?

Determines Openness/Intellect: Gauges levels of curiosity and creativity, imagination and independence, and how one responds to new experiences.

A curious and imaginative character might question things, or want to figure things out, while someone with limited intelligence or creativity might be content to accept things as they are and not wonder why.
This trait also determines how open your character is to the world around them, and can help you decide how far they might go to find an answer or solve a problem.
For flaws in this trait, someone who isn’t afraid of asking a lot of questions might not know where the polite line is on what not to ask or say.
(Here's more on 5 Ways to Get to Know Your Character)

2. How do they live their life?

Determines Conscientiousness: Gauges levels of organization and work ethic, self-discipline and ambition, planning vs. spontaneity.
This can help determine how hard a character might work to achieve a goal, and how they’d approach it. An organized person might create a well-thought-out plan before acting, while an impulsive character might dive in without thinking.
For flaws in this trait, an unorganized character might miss important clues, lose critical information, or have to retrace steps along the way. A lack of ambition might create a need for outside forces to shove them into action, or they’ll only act when the situation becomes dire.
(Here’s more on In the Flesh: Fleshing Out Flat Characters)

Determines Extraversion: Gauges levels of sociability and enthusiasm, assertiveness and talkativeness.
This can help determine how comfortable your character feels around people.

An extroverted character might be chatty and gregarious at a party, while a shyer character might have troubles in crowded situations.
It can also determine how they choose to solve their problems—one type might eagerly seek out help and enjoy the camaraderie, while another might feel asking for help is more terrifying than the problem they’re facing.
For flaws in this trait, social awkwardness or too much enthusiasm could put your character in difficult situations or cause trouble with the people they need to help them.
(Here’s more on 8 Ways to Create Character Flaws: Learn All Your Character’s F Words)

4. How well do they work and play with others?

Determines Agreeableness: Gauges levels of friendliness and kindness, cooperative and trusting, how well-tempered someone is.
This can help determine how nice your character is, and how they regard the people around them.

Backstory and upbringing can have a big influence here, as someone who was always lied to as a child is likely to grow up not trusting others. If you want your character to have troubles playing nice with others for plot or character growth reasons, this could be a good spot to figure out what happened in their past to make them that way.
For flaws in this trait, an untrusting character could misread intentions or expect the worst from everyone around them. Someone who is less than friendly might have trouble getting anyone to help them.

5. How emotional are they?

Determines Neuroticism/Emotional Stability: Gauges levels of calmness and tranquility, confidence and sensitivity.
This can help determine how emotionally stable a character is and how they'll react when the unexpected happens.

A confident a character might risk a lot for what they want, while someone who's less sure might hedge their bets or play it safe. If they're calm, they might handle unexpected events with aplomb, while a more excitable character might freak out when events change.
For flaws in this trait, someone who never gets excited might not truly appreciate a miraculous event, or a lack of confidence might be the very thing keeping them from being happy.

(Here’s more on Create a Powerful Story Cast: A Master List of Character-Building Resources)
These traits offer an endless supply of options, and there's no right or wrong answers when creating a character. Contradictions in personalities can create some wonderful quirks, such as the adventurous archaeologist who happens to be afraid of snakes.

Depending on your creation process, you might consider these traits before you start a novel, or refer to them during the first draft as your characters encounter problems.
You might also think about questions that apply to your specific story that might play a much stronger role, such as a character with trust issues who might need to learn to trust someone to get what they want.
Try creating your own template of basic questions to ask that fit your style and the types of characters you like to write about.

Want something a bit more spontaneous? I’ve written a character-creation game based on these traits. All you need is a six-sided die, or a link to a random number generator.

Looking at the basic building blocks of personality can help you turn your characters into real people, with all the strengths and weakness that brings.

EXERCISE FOR YOU: Create a character using these five questions. Or, take one of your existing characters and ask them these questions. Repeat the exercise for as many characters as you’d like.

How do you determine a character's personality?