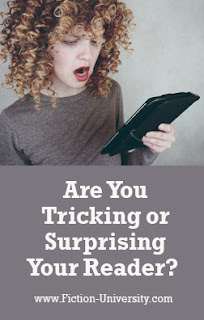 If you’re going to trick your readers, proceed with caution and a lot of skill.
During a world-building panel I did at the Space Coast Comic Con, we had a brief discussion about tricking readers. Some authors on the panel were for it, some against it, and there were strong opinions on both sides.
It made me think about what makes a good twist vs. a bad trick. Because some novels trick readers and we love the author for it, but others trick readers and we refuse to ever read that author again.

I think it’s the Dallas vs. Newhart difference.

For those who weren’t watching a lot of TV in the 80s, both shows had huge twists that surprised viewers. One worked, one did not.

In the show Dallas, a beloved character (Bobby) died in a season finale. The next season proceeded without him, developing storylines and dealing with his death and all the normal things you’d expect to happen after killing off a favorite character.
But in the season finale of that year, Bobby’s wife walks into the bathroom one morning and discovers him in the shower. It was all a dream! The entire season was a, “ha, ha, fooled you!” for viewers and none of it actually happened.
Viewers were pissed.

The show Newhart did almost the same thing. From 1982 to 1990, the show followed the life and times of Bob, an innkeeper in Vermont. However, Bob Newhart also had a show that ran from 1972 to 1978 that followed the adventures of Bob, a psychologist in Chicago.
On the final episode of the 1990’s show, Bob wakes up with the wife from the original 1970’s series, and says he had the weirdest dream (and that his wife should wear more sweaters—a joke to viewers). It was a masterful twist and a great ending to a much-loved show.

Why did one twist work and the other fail?

Dallas failed because viewers felt lied to. They invested time and emotion into characters and stories that were yanked away from them. The dream invalidated everything about the season.

Newhart succeeded because viewers felt part of the joke. Many likely knew the original show and felt a character coming full circle with a nod to the previous series. It was also the final show of the series, so even though it was just Bob’s dream, it didn’t invalidate everything they loved about the current show set in Vermont.

This is the difference between a surprise and a trick.

The toughest part of tricks vs. surprises, is that it’s different for every reader. Some readers enjoy a plot that they can’t figure out because the author withheld vital information, while others find this incredibly frustrating (though honestly, I think more fall on the frustration side).
But there’s another pitfall to watch out for: if you haven’t laid enough groundwork for the twist, it might not come across as a trick or a surprise—it just might feel like bad plotting.
Readers (and viewers), love surprises. They want the twists, the shocks, the unexpected, but they also want to feel that their investment in the novel is worthwhile. If things aren’t real, then there are no stakes and no consequences for any of the character’s actions. If nothing matters, then why bother reading the book? Why care about the characters and events if they aren’t real or none of it actually happened?
(Here's more on Do You Have a Story with a Twist, or a Twist That Thinks it's a Story?)
Here are some things to remember when crafting surprises (or tricks) for your readers:

Not all tricks are treats.

What constitutes a trick falls into a strange gray area. A trick can be a good surprise if:
All of these allow readers a chance to figure out the truth, or know that what they’re seeing might not be right. They know something is up, so odds are the trick will be a twist that delights them.

A trick can be bad if:
The intent of a trick isn’t to astound or surprise, but to be smarter by lies, omissions, and trickery. Don’t play readers for fools and deny them a chance to figure out the truth for themselves. 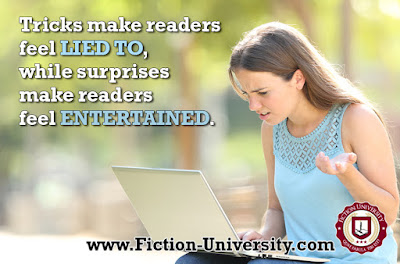 There’s a thin line between “what a fantastic twist” and “I’m never reading this author again.”

Like so much in writing, author intent plays a large role in surprises and tricks.
If the goal is to craft a twisty story that keeps readers guessing and makes them wonder what the truth really is, there’s a good chance you’re surprising and not tricking.
If the goal is to purposefully lie about information readers need to spot the twist, and you’re intentionally misleading them, odds are you’re tricking them.
If the goal is to make readers wait until the very last page to find out the truth, and you’re rubbing your hands together glee while thinking, “They’re never going to guess this,” well, it could go either way. If the truth is there, just well-hidden, it might be a surprise. If not, it’s likely a trick.

That line can be extremely thin. Sometime it’s hard to know how much to share and how much to hold back. Ask yourself:

Are there any clues about the truth in the story?
If there isn’t a single clue or hint that things aren’t what they seem, that’s a red flag readers will feel tricked when you reveal that truth.
If there’s a hint or suggestion that things aren’t what they seem, you’ll probably end with readers delighted over the surprise they didn’t see coming. Ender’s Game is a great example here. All the clues are there, but you don’t realize they are clues until the truth is revealed. (And I won't say more and spoil this book. Even the movie handles this well).

Is the truth clear once readers know that truth?
A great twist is one that you never saw coming, but when you go back through the story you see how it all unfolded inevitably to that surprise. Life of Pi is a good example here. Everything you see makes sense in the context of the story, but when the truth is revealed, it still fits that truth, and the reality is all the more poignant.

Do you tell readers it wasn’t real from the start?
Some stories let you know right away things aren’t what they seem. Justine Larbalestier’s Liar tells you the narrator is a liar before you open the book, so anything she says can’t be taken at face value. When readers know up front all bets are off, they don’t mind if “anything can happen.”

Include the reader in the “joke” (the twist) and they’ll welcome the surprise.

Surprises are wonderful things, and we should aim to keep our readers guessing, but when we shift from twist to trick, we risk losing those readers. But playing fair will keep our readers coming back.
After all, we want them enjoying the surprise, not feeling like they never had a chance to really understand what was going on in the novel.
EXERCISE FOR YOU: Take five minutes and examine the twists, reveals, and surprises in your novel. Are there any that might be more trick than treat?
What’s your favorite plot twist (if you can say without spoiling anything)? What twist didn’t you like?
*Originally published September 2016. Last updated December 2020.
For more help on plotting or writing a novel check out my Plotting Your Novel: Ideas and Structure.