Why "Start With the Action" Messes Up So Many Writers 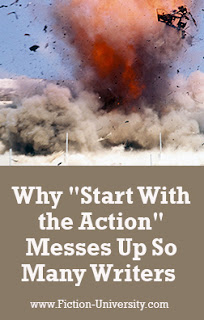 By Janice Hardy, @Janice_Hardy
Sometimes really great advice is anything but helpful.
If I took a poll for the most common writing advice, “start with the action” would make the list.
Which it should, as it’s great advice. But it’s also like saying, “show, don’t tell.” We know we ought to do it, but we don’t always know how, and those four words don’t help us with the beginnings of our novels.

This can be especially hard on new writers, because they might think they’re doing everything right, but still get negative feedback or even rejections on their manuscripts. “I do start with action,” they cry. “Can’t you see that car barreling off that cliff there? What do I have to do, blow up a planet?”

Well, no.
Maybe it’s the movie industry and all those summer blockbusters, but say “action scene” and most people envision something Michael Bay-ish—car chases, fights, explosions, people in dire straits. Action equates to people in crisis, so “start with the action” naturally equates to “start with characters in crisis.”

And opening scenes where the reader doesn’t care = bad.

Thus the problem with this wonderful, yet often frustrating, advice. If you don’t know what “action” means in fiction, you can easily misunderstand how to use it.

“Start with” doesn’t mean blow up a building on the first page. The implication of action is enough if readers can see the character in the middle of a situation or action that’s going to go somewhere. You can take a few pages to get to it—if there’s a sense of something about to happen on page one.
And that’s the real key to this advice. If readers feel like the scene is moving toward something interesting they want to know more about, it’s “starting with action.”
Let’s explore what “start with the action” really means.

The simple version: Start your novel with characters physically working to achieve a goal or deal with a situation—something happening or about to happen.

When should you do this? Within the first few pages. “Start” doesn’t mean page one, though the sooner you get to the action the sooner you’ll hook your reader.

Sounds crazy simple, right?
Just have your characters doing something in the first few pages.
That something doesn’t have to be a crisis. It doesn’t have to be a shootout or a car chase or a struggle to survive.
For example:
Notice every one of the above examples has a hint of conflict? How each one makes you ask a question about what it sets up? And these are only one-line summaries, not the whole page. I recommend reading the opening pages of these to see how the authors started with the action in different ways.
(Here's more on Where Does Your Novel's Conflict Come From?)
Okay, here’s where it gets tricky.

Just because a book starts with action doesn’t mean it’s a strong opening with the right pieces to hook a reader.

There’s a lot more to a strong opening scene than starting with the action. It’s just one aspect of what an opening scene needs to do. Hence the conflict in the above examples.
So, “my novel opens with my protagonist cleaning her house” is indeed starting with action, but if that housecleaning does nothing to advance the story or create conflict, it doesn’t make a good opening scene.
But if the action suggests something is about to happen, or something isn’t going to go the way the character planned, or things are about to go very, very, wrong, then it does indeed start with action.

(Here’s more on You Get One Page to Hook a Reader. Yes, Really.)

Let’s recap:
What action is: The sense that something interesting is about to happen.
What action isn’t: Description and exposition.

Since we’re drilling this down to the basics, let’s look a little closer at what “description” means here, because we describe our characters being active. Does that mean that’s bad?

Description in the bad sense means describing the world, the people, the setup, explaining how things got to be this way, and why this is all very important to the story. It’s everything that isn’t about a character physically doing something.

“He walked down the tree-lined street, swinging his arms,” is action, even though we’re describing what he’s doing. This character is doing something. What happens in the next line or two will determine if this will hook readers or not.

“The street opened before him, a river of black asphalt shimmering in the noon-day heat,” is description. There’s no person here doing anything. And again, what happens in the next line or two will determine if this will hook readers or not.
If example one goes on to describe the man’s day and there’s no conflict or any hint of something about to happen, it’s not the right kind of action. But if he runs into a mugger, or an ex-lover, or his boss who knows he called in sick that morning…then readers see a conflict brewing and will want to know what will happen next.
If example two goes on for another page or two describing the street, the town, the weather, then odds are readers will move on because nothing is happening. But if this shifts focus to a character about to engage in something intriguing on that hot street, readers will be curious to see where it goes.

This doesn’t mean you can’t use description in your opening scene, or that setting the scene isn’t a valuable part of a strong opening. It’s just not action.
Good writing blends action, internalization, dialogue, description, and exposition to tell a strong story. You want to strive for a balance between these elements to craft a compelling opening that will draw readers in.

And before you ask (because I know some of you will).

However…those thoughts must be directly related to the action in that scene, and it can’t take pages and pages to get to the physical action.
For example, my own novel opens with a page (about 250 words) of the protagonist musing over the merits of stealing eggs vs. the whole chicken. But she’s having this mental discussion while she’s in the middle of stealing those eggs, and at the end of those 250 words, she’s gets caught. She’s thinking about what she’s doing, not just waxing philosophical.
When it comes to opening with a character thinking, you want to avoid “navel gazing,” where the character is musing about the world and drones on without any sense of something in progress.
That’s not action.

(Here’s more on What You Need to Know About Internalization)

Still unsure if your opening passes the action test? Here are Some Common Red Flags for an Action-less Opening Scene:

It has no characters: If there aren’t any characters in the scene, odds are it’s not starting with action, because characters drive action. There might be people in the scene, but in this case, they’re more like background details. A “character” is someone readers are supposed to connect with and care about. And that character should be doing something.

It has no interaction between the protagonist and, well, anything: Who and what they interact with can vary, but if it’s the protagonist standing there thinking or musing and they do nothing else, there’s probably not enough action to keep things moving. It’s a head in a blank room thinking.
Interacting with the room or the environment can also work to show action, but be wary of empty gestures—if the character is just randomly picking things up so you can describe them and none of those interactions are leading anywhere, it’s still a head in a room.

It has no dialogue: While you can have a action scene that spends a lot of time in a character’s head, no dialogue at all for pages and pages can indicate nothing is going on, or the “action” is of the action-movie variety.
Characters talk, and conversations are active by nature.

(Here’s more on Bob and Weave: How to Mix Character Actions and Internal Thoughts)

Exceptions do exist, but don’t use them as an excuse to ignore the advice.

There are novels that open without action, and yes, some of them are even bestsellers. But they work because they have strong openings, not because they didn’t start with the action.
Some classic novels open with pages of description (The Grapes of Wrath is the most commonly referenced here). There are novels with random strangers in crisis on the first paragraph. You can have a character musing for several pages and make it riveting. It’s just more challenging to make these non-conventional openings work (which is why most folks advise starting with the action).

“Start with the action” is good advice, but the most important advice to follow is, “hook your reader however you can.” Give them something interesting that makes them want to keep reading.

And if you’re getting less-than-positive feedback on your opening scene, test it against these red flags. Not starting with the action could be a reason why.
How does your novel start? What are your favorite openings? Do any of them break the “start with the action” rules?
*Originally published July 1025. Last update October 2020.