Story Structure: How the Act Two Choice Works in a Novel 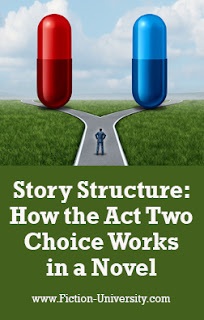 The act two choice is a pivotal moment in your novel, and the wrong choice could send your middle in the wrong direction.

It’s far too easy to know what happens at the end of act one and just plow on forward into act two without really thinking about how the protagonist got there. Did they choose it, or were they dragged along?

Most writing advice and structures combine the act one problem (whatever name it’s called, as it has several) and the act two choice, but I find it more helpful to think of them as two separate moments. This is the first major plot point where the protagonist needs to choose to move forward. So it seems only logical to pay attention to what that choice is.

If there’s no choice being made, that’s a red flag the protagonist might be reactive or have no agency to act. Without that clear goal, there’s a pretty good chance you’ll get stuck within a few chapters, because you don’t know what the protagonist is trying to do. You might know generally, or know where the plot is supposed to go, but without that act-one-to-act-two-goal-handoff, the narrative drive often stalls, because the act two choice is the transitional moment linking the beginning and the middle.

This turning point is when the protagonist chooses to embrace whatever problem they’re confronted with at the end of act one, and accepts the opportunity it offers to resolve that problem. How they decide to deal with that problem establishes how the plot is going to unfold throughout the middle of the novel.

The act two choice verifies what your novel’s plot is about.

Which is why this choice is so important. The act two choice is the first hard decision the protagonist has to make, and it’s a choice that firmly embroils them in the plot. It’s essentially telling you “this is the problem my protagonist is trying to resolve.” If that isn’t the core conflict of the novel (or directly connected to it), odds are your beginning isn’t driving the plot toward the ending, and the novel likely feels out of whack.

What it is: This is where the protagonist decides to set off on the story adventure they’re presented with in the act one problem, whether that’s an actual quest, or a step in their life that needs taking. It’s a choice to act, to move, to do something that will change the protagonist’s life or something in their life.

The choice is key here, and the protagonist must choose to act (unlike the inciting event, where the protagonist can be dragged into the problem). Greater forces could have gotten them here, but they must decide to move forward on their own. This is their last chance to say, “nope, not gonna do it,” and go home. After this, they have to see it through to the end.

This choice is important, because agreeing to act will force them out of their normal life and into an unfamiliar (and often emotionally scary) situation. Some story structures refer to this as the protagonist leaving the Real World to enter the Story World of the novel. The protagonist chooses to step out of their comfort zone and enter a new and unfamiliar world.

This step into the unknown is vital for their goals, both the external plot goal and their internal character arc goal (if they have an arc). This choice is what officially launches the middle and provides all the fun plot events to explore. Understanding this moment helps you figure out what scenes to write.

You’ll notice “learning to navigate” plays an important role here. This sums up what the protagonist will do in the middle of the novel. They’ve discovered a “new world” and has to figure it out or else bad things will happen.

When it happens: At the beginning of act two, roughly 25% into the novel. It ends the beginning, and begins the middle. The act one problem guides the plot to the act two choice, and the choice to act moves the plot forward.

What its function is: To provide a basic plot framework for the protagonist to experience challenges, and provide the story question for readers that will drive the story until the dark moment at the end of act two. It’s “what the middle is all about.”

The act two choice also often launches the protagonist’s character arc as well, because their flaw will be their weakness during the middle of the novel. They’ll struggle and fail, not seeing what they need to do to become the person they want to be.

Why it's important: The act two choice gives the protagonist something to do in the middle, and provides direction for the plot. It also offers the protagonist all the opportunities they need to fix their life and start the important journey of their character arc. Whatever their problem was in the beginning of the novel, readers will see them face similar problems and grow from those experiences.

Blake Synder calls this section the “promise of the premise” in his Save the Cat structure, because this is where you see all the fun stuff about the story idea. This is the reason readers picked up the book.

The act two choice focuses the novel’s plot and makes it clear where the story is going to go, and gives readers reasons to come along for the fun ride.

In essence, it’s when stuff gets real. The choice has been made, and now the protagonist will deal with the ramifications of that choice. 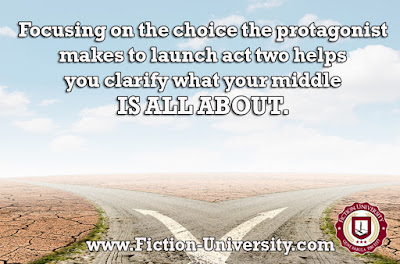 Things to Remember When Crafting Your Act Two Choice

1. The protagonist must choose to act, and have some kind of plan based on that choice.

The middle can’t happen if the protagonist doesn’t have a plan, and the act two choice launches that plan. It doesn’t have to be the best plan in the world, and it doesn’t even have to work (odds are it’s better if it doesn’t work), it just needs to move the plot forward.

The protagonist will have good reasons embracing the plot at this point and move forward, even if their plans don’t work out as planned.

2. The problem must give readers what they’ve been looking forward to seeing.

Whatever the premise is, readers want to see it in action. They want to experience the cool idea that made you write the novel in the first place. It’s probably why they picked up the book or watched the movie.

The act two choice is a strong moment that tells readers "things will be different now, so hang on" and propels the story forward. It should feel like something has changed, and the story has just stepped things up.

Focusing on the choice the protagonist makes to launch act two helps you clarify what your middle is all about.

Boggy middle syndrome is real, and a lot of middle sag because this choice isn’t considered before the middle is written. There’s not enough plot to carry it, because what the protagonist is trying to do is never fully explained or even realized. But the act two choice makes it obvious what has to be done, because you have your protagonist make a decision about what to do, and create a plan to do it.

EXERCISE FOR YOU: Take five minutes and examine the end of your act one. Is your protagonist facing a choice, or do they just stumble into act two with no real direction?

Here's the entire story structure series:
Is your middle a direct result of what happens at the end of act one and the act two choice?
*Originally published May 2015. Last updated February 2021.