A Core Question for Getting to Know Your Character 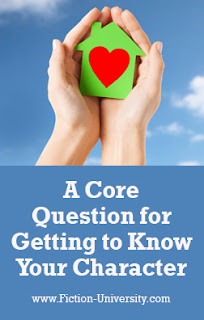 Even if you do little to no character development before you start writing, asking this one question can pinpoint the core of who that character is.

Since I write science fiction and fantasy, those character templates with tons of questions never worked for me. They’re always rooted in the real world and I spent too much time trying to figure out if “god-appointed assassin” was their employment, religion, or maybe even a calling.

I can see the appeal of such a questionnaire, but I tend to be a minimalist when creating characters. I like to learn who they are by tossing them into the plot and seeing what they do. But it helps to have a starting point for those characters, otherwise they develop willy nilly and feel completely inconsistent and at odds with themselves. They make decisions based on plot (what I want) and not what they want.

There are myriad of ways to create characters. Problem is, there are so many of them that we can spend all of our time answering questions and filling out forms and never actually write the novel those characters exist in. I wanted a shortcut that pinpointed who a character was at the core. An easy question that encapsulated that character well enough to guide me during a first draft.

And then I found it.

What’s the one thing this character can’t live without?

And this naturally led to another question that delved deeper into the character’s personality, like a guided tour of their soul.

Why does it matter to them?

People value things for very different reasons, which in turn makes them very different in both personality and motivations. Valuing a possession could suggest a materialistic nature, or profound sentimentality, or even a fear of loss. A desire for freedom at all costs could create an idealistic dreamer, as well as a person who’s afraid to commit to anything that might tie them down.

Once you understand what a character values most, you know who they are at their core.

What I love about this question, is that it usually ties into the plot as well. I’ve never had a character value, say, their antique coin collection, but their goal is the stop an evil wizard from enslaving the land. Or, valuing the right to choose your own destiny when the plot was about winning a small-town baking competition. But this happens with other character development tools, because the focus is on creating a person who’s going into a book, not the person living in your story world.

When you can connect character development and story development, you cut the work in half, because you’re developing both alongside each other. 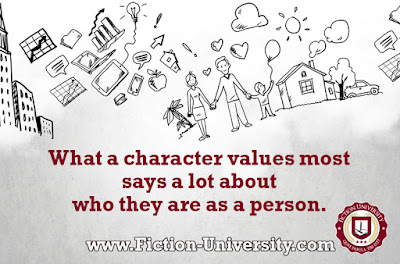 And since odds are your character is going to either lose, or struggle to hold onto what they value, here are some useful questions to ask:

If this character lost what they value most, how would they react?

This can suggest how the character might react to adversity in general. The person who sits down and cries for a week is probably not going to be an in-your-face confrontational type, while the person who seeks revenge on whoever took what they value is likely to react in a much more aggressive fashion.

(Here’s more on How Does Your Character Answer Questions?)

What would this character do to avoid losing this “valued thing?”

This can suggest the lines a character might cross, or how much they’ll endure for something important to them. Can they be pushed beyond their limits? Would they betray their own morals? How far are they willing to go? If they’re willing to break laws or vows for this “valued thing,” where else might they be flexible with ethics or morality?

(Here’s more on What Makes Your Characters Uncomfortable?)

What would this character sacrifice to protect this “valued thing?”

This is a great way to determine what choices to throw at the character by forcing them to make that sacrifice. It also helps with developing what else might be in the character’s life, or what they might not value as much even if they do care about it. Are they willing to let a tyrant oppresses a village as long as their family is left alone? Willing to give up that family for the greater good if it stops the tyrant? Maybe they’re willing to sacrifice themselves for what they value.

(Here’s more on What Are Your Characters Thankful For?)

What a character values most says a lot about who they are as a person.

The character who values money over people makes far different choices than those who put lives first. Those choices determine how the plot unfolds. So, identifying a character’s priorities and how they’ll make choices tells you how a scene is likely to go, which makes it a lot easier to plot and write your novel.

Some characters start as wispy outlines, while others leap fully formed from our heads. No matter how they make it to the page, they all care about something more than anything else in their lives. Knowing what matters to them will help us turn them into real and compelling people our readers will remember.

EXERCISE FOR YOU: Take five minutes and figure out what your main characters value most. Do this for your protagonist and antagonist in particular.

What does your main character value the most?

*Originally published on PubCrawl, August 2014. Last updated March 2021.
Find out more about characters, internalization, and point of view in my book, Fixing Your Character & Point-of-View Problems.