Story Structure: How the Act One Problem Works in a Novel 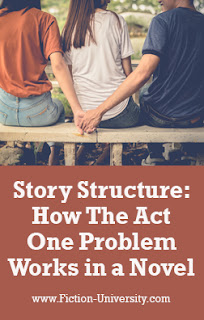 The act one problem is where many first drafts fizzle out. Here’s why.

We tend to think of the beginning of a novel as the first chapter or opening scene, but it’s really the first twenty-five percent of the novel. The “beginning” is everything that happens before the first major plot point the protagonist can’t walk away from.

The inciting event might officially start the novel, but it’s a call to action the protagonist can refuse (and often does). And once they do, things spiral out of control and get worse until getting involved in the plot is no longer an option.

The protagonist must act, because the problem is now too big to ignore. It demands attention, and it’s made it very clear it’s not going away unless somebody does something.

The act one problem is the tipping point from situation to plot.

If I took a poll to discover where a first draft stalled, I’d bet a large percentage of the answers would be around the act one problem. Probably just after, because the first act is all about setting up the story and getting the plot ducks in a row, and the second act is where the actual work of plotting begins.

If you know what your act one problem is, odds are you’ll breeze right into the middle and get stuck farther down the line (grin). If you don’t know it, you’ll likely hit a wall after the setup is done, because you aren’t sure what happens next. Maybe you’ll see where the plot needs to go, but not how you get there. Knowing this moment is critical to moving forward.

The act one problem is where the protagonist has to act or the novel stops dead in its tracks.

What it is: The act one problem is where the protagonist discovers they have an issue they have to resolve, and is asked to set off on the story adventure. This might be an actual quest for a magical item, moving to a new town to start life over again, or choosing to confront a cheating spouse. Whatever happened in the inciting event to trigger the start of the story has led to this moment.

This “will you step into the unknown?” is vital for both the external plot goal and the internal character arc goal. This answer to this question is what officially launches the middle, with the act two choice.

Each character faces a problem they can’t walk away from, and they prep in some way to deal with it.

When it happens: Between the inciting event and the end of the first 25% of the novel (roughly). It ends the beginning, and transitions into the middle. It might be a single scene, or it might unfold over a few chapters, but it ends with a situation that requires a choice to move forward.

What its function is: To remind readers what problem the protagonist needs to solve in the middle, and give a general overview about what the middle of the novel is going to cover.

Why it's important: It provides a “beginning” for the middle and gives you a starting point for that story arc. The act one problem will lead through to the dark moment at the end of act two when the story question posed here is answered. It’s a launchpad to get to what the novel is truly about.

In essence, you’re saying there’s a problem that’s big enough to carry the rest of the plot, and now the protagonist must hustle to resolve that problem. 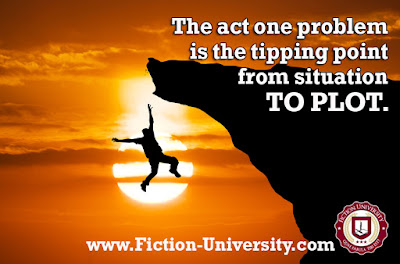 Things to Remember When Crafting Your Act One Problem

1. The problem is a direct result of what happens in the inciting event.

Whatever actions the protagonist takes because of the inciting event leads them to this story question and problem. They cause it to happen in some way, and now they have to deal with it.

2. The problem must be big enough, and the stakes high enough, to carry the plot through to the midpoint of the novel.

The act one problem can’t be something that’s resolved in a few pages, otherwise there’s nowhere to go in the middle of the novel. This problem requires a lot of work to resolve, and it’ll snowball into an even bigger problem by act three.

The act one problem also often leads to something unexpected that shakes up the entire novel, such as the midpoint reversal, when the story often goes sideways in the middle of the novel.

The stakes will also be high, but not so high that there’s nowhere for them to go. If “protagonist might die” is a likely risk (such as in Stargate or The Hunger Games), then the stakes after that will be things worse than death.

The stakes can be either external, internal, or both. There is a consequence for following the plot into the middle of the novel.

3. It will eventually lead the protagonist to the core conflict of the novel and the problem that will be resolved in the climax.

Resolving this act one problem is the first step toward resolving the core conflict of the novel. If the protagonist fails here, they can’t “win” and the novel’s conflict won’t succeed.

The act one problem is a major step on the plot path of the novel. It points the protagonist toward the resolution and asks them if they’re willing to take the risk to get there.

The stronger and clearer your act one problem, the easier the middle is to write.

This is the reason you wrote the beginning in the first place. All that setup and story development was to create a situation to get the protagonist to this moment, and show them the main problem the novel has to solve. The deeper and richer this problem is, the more options you’ll have to plot with in act two. The more conflict you can draw from it, the more unpredictable that plot with be, and the more likely you’ll keep readers guessing about the outcome.

EXERCISE FOR YOU: Take five minutes and look at your act one problem. Is it doing everything it needs to do to launch your middle and carry the plot? If not, brainstorm ways to strengthen it so it does.

Here's the entire story structure series:
Does your act one problem establish what you middle is going to be about?

*Originally published May 2015. Last updated February 2021.
Find out more about plot and story structure in my book, Fixing Your Plot & Story Structure Problems.