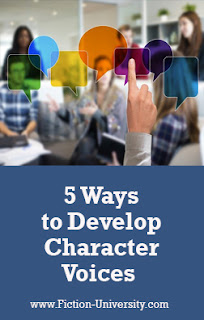 If you want memorable characters, don't forget to give them unique voices.

One of my earliest experiences with how voice affected fiction was in seventh grade, when my English teach played us a record (yes, record, I'm dating myself here) of Harlan Ellison reading his short story, "Repent, Harlequin!" Said the Ticktock Man. Not only was I blown away by the story, but by the way Ellison crafted the narrative. The voice was unique.

It wasn't until years later I learned there was a difference between author voice and character voice, but the lesson on "strong voice = strong story" had been stamped into my brain. Character voice is simply an extension of author voice.

A well-crafted character steps off the page and into readers' hearts, and a big part of that is their voice. Readers can see personality in the words that character uses, in the thoughts they think, and things they choose to say--or not say.

If the characters all sound the same, readers can forget who is who, and they wind up blending together into one big character mush. (And really, who likes mush?). Readers can easily forget which mushy character was part of which scene, so you risk the entire plot falling apart. All your wonderful twists and turns could be ruined because readers mixed up Antonio and Lou, or forgot which character did what when.

To avoid this terrible literary fate, let's look at some ways to develop a unique voice for every character.

1. How does the character greet people?


People say hello differently. Sometimes it's a regional or cultural tradition, or even a personal style. Is your character a "Yo what's up?" kind of gal, or a "So good to see you, what have you been up to?" type? How she greets someone says a lot about where she grew up, where she lives now, and how open she is toward others. Understanding her personality can help determine what her voice sounds like.
First impressions are made with that first greeting, so let it show readers who this character is.

(Here's more on How to Find Your Character's Voice) 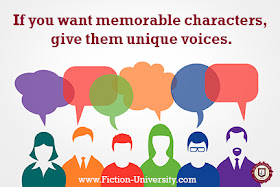 2. How does the character answer questions?


Someone who only gives one-word answers comes across differently from one who offers way-too-much information. Maybe the character is being evasive, indicating a lie, or maybe they're just shy. Saying too much might signal nervousness, or a deliberate attempt to confuse, or even just reveal excitement.
A character's voice gives writers opportunities to build layers of personality for that character. Readers will figure out who they are based on how they verbally interact with others in the story.

(Here's more on How Does Your Character Answer Questions?)

3. Does the character make questions or statements?


This is an important aspect of how a character decides to act and how they make a decision. Someone who judges a situation and immediately says what has to be done is a different personality type from someone who questions all sides of the problem before making a decision.
See how a simple greeting can define what that character is like in other aspects of their life? All of these small verbal interactions are connected to a larger personality type.

(Here's more on 5 Tips for Using Voice in Dialogue)

4. How educated is the character?


Education plays a role in how we communicate. Is this a gal with a large vocabulary who likes to use it, or someone with a limited vocabulary who uses a lot of slang or clichés? Take it a step further and think about why she speaks as she does. Is she self conscious about her Ph.D and purposefully tries to sound dumber to fit in (or hide something) or a smart gal who never got past high school who tries to sound more educated?
People are motivated by different things, and they aren't always the most obvious things. Think about why you character speaks as they do.

5. Where's did the character grow up?

Regions have different dialects, slang, and terms for things. Saying pop versus soda, crayfish versus crawdad, everyone versus y'all. Where a character grew up will leave traces on his speech and suggest his background or upbringing. If his hometown has a distinct accent or speaking pattern, it makes it even easier to figure out how someone from there would speak. Where someone grew up also affects how they might interact with others.
Early life experiences and lessons shape who we are, and that holds true for characters as well.

Personality plays a large role in how a characters sounds. Their voice will reflect that personality and color every line of dialogue and internal thought. Even better, it'll help you develop richer characters because they won't just be two-dimensional people spouting lines on a page. Those lines will come from someplace real, because you'll know why those characters speak they way they do.

How do your characters speak? What determines their voices?

In 250 words or less, show a conversation with different character voices.

Here's the catch--You can't use greetings, because that's too easy.

And the extra challenge: Make it a conversation where one person is trying to persuade the other in some way.

Post your entry in the comments section. Deadline for entries is next Monday, June 24, at noon, EST. I'll choose the winner and post the finalists on Tuesday, June 25th.

Winner gets a 1000-word critique. Contest is open to everyone. CONTEST CLOSED (but feel free to do the exercise if you'd like)
Share