Is Your Novel Stuck in the Mud? What Makes a Good Middle 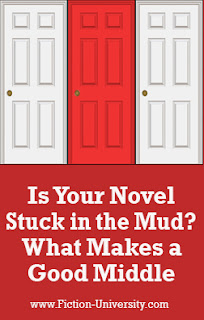 Many writers hate middles, and for good reason. But writing a strong middle is easier than you think.

When I was new to writing, every novel I wrote bogged down in the middle. I’d start off well, but then I’d run out of things for my protagonist to do, and I’d start making things up just to fill up space, and it would turn into a complete mess and I’d start over.

I can’t tell you how many times I did this. Dozens at least, if not more.

Eventually, I got frustrated and decided if I wanted to break this cycle of despair, I’d have to find a way to get through the middle of my novel.

So well, in fact, that my agent said my first novel’s middle was “damn near perfect.”

One big reason middles are so problematic, is because the exciting beginning is over, but you’re not to the exciting ending yet. But this is where the meat if the novel unfolds, so slacking off just isn't an option. What you need are a few bones to stick that meat to.

When you understand what makes a good middle, you have the tools to write a great middle.

Writers often fail with middles because we don’t have enough plot or story to fill them. They make up fifty percent of the book, but we don’t always spend fifty percent of our efforts into them. We focus on the beginning and how the story starts, and how the story ends, but the middle we expect to just take care of itself. We dump backstory and bog the story down. We repeat scenes because we don’t know what else to do. We don’t really know what the protagonist wants, so the plot stalls. And the worst offender—we don’t have enough conflict to carry the story through to the end.

There are plenty of reasons why a middle doesn’t work, but let’s look at what makes a good middle.

A good middle keeps its promises.

Blake Synder (of the Save the Cat structure), calls the middle the “promise of the premise.” This is my favorite way to describe a middle, because it so perfectly captures what a middle is all about—following through on the promises you made to readers about the novel.

The cover blurb tells readers what they’ll get if they read the novel. The beginning establishes the goals and stakes, and asks the story questions that will drive the plot. All of these things create expectations in the reader, and make promises about what the novel is going to give them. The ending resolves all those promises and problems.

And the middle is where it all happens.
(Here’s more on Three Things “The Intern” Can Teach Us About Keeping Our Story Promise)

It digs in and really gets to know the story.

The middle expands on what was set up in the beginning, and develops the characters, world, plot, and story. In most cases, the protagonist has left their comfort zone and is exploring new territory they’re not sure how to navigate—and nothing is easy.

Opportunities for character growth appear, and the protagonist either learns them or fails (usually fails). Plot puzzles have to be solved. Questions are answered, only to lead to more questions and harder challenges to find the answers.

And as the protagonist discovers new information, it changes their beliefs, plans, and reactions. 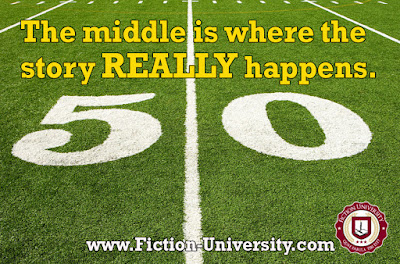 It doesn’t hold back, but piles on.

My favorite aspect of a middle is the escalation of stakes. This is where you heap the problems onto the protagonist, making everything harder and more dire. Problem get bigger, as more and more of the story is uncovered. Things gets more personal as the protagonist realizes how important they are to the resolution of the story, and what they have to lose.

As the middle unfolds, the antagonist starts getting the upper hand. They start winning, they lay better traps, they undermine the protagonist’s plans and confidence. Maybe secrets are revealed that throw the protagonist for a loop, or they discover what they thought was true is all a lie.

And just when the protagonist thinks they have a handle on the problem—things change and it starts slipping away.

It ambushes the protagonist in the worst way.

The middle ends at the darkest and lowest point of the protagonist’s life. This is a moment when everything has gone wrong and there is no hope. Everything the protagonist has tried so far has failed. They fully believe the worst and see no way to win or resolve their problem. They lose all hope and want to abandon everything and slink away in failure and despair.

It’s called the All is Lost moment for a reason.

And what this moment does, is force the protagonist to have a serious heart-to-heart with themselves (Aptly named the Dark Night of the Soul). They examine their life and story choices. They face hard truths and come to terms with them. They dig deep down and realize what has to be done, even if that requires a sacrifice. Often, an important step in their character arc is learned, and this moment often ties into the novel’s theme.

At the end of it, the protagonist picks themselves back up, dusts themselves off, and prepares to face the antagonist.

(Here’s more on Battered But Not Beaten? Pushing Your Character Past The Breaking Point)

And then it ditches any further responsibility.

Middles love creating all that drama, but they don’t like to stick around and deal with it. Once they’ve beaten and battered the protagonist to nothing but bruises, they hand the story off to the ending to deal with.

If you’ve crafted a strong middle, there’s no way readers are going to put the book down now.

Bonus Tip: What helped me craft a “damn near perfect” middle.

I spent months studying middles and story structure, and I found a ridiculously easy way to keep my middles moving, and relevant, to the rest of the novel.

This is a moment in the middle of the book where something major happens in the plot. For me, I use this moment as a way to shake up the story and surprise readers. Either something happens that changes how the protagonist or the readers sees the problem of the novel, or the protagonist acts in a way that shocks readers because they never saw it coming.

The midpoint reversal works so well because it gives me a solid turning point to plot to for the first half of the middle, and then a strong problem my protagonist has to recover from that drives the second half of the middle all the way to the climax. It breaks the middle into two pieces that are so much easier to plot for.

Other structures handle it a little differently. Blake Synder’s Save the Cat structure calls this the midpoint, where there’s either a false victory, or a false defeat that mirrors the ending in some way. Michale Hague calls the midpoint the Point of No Return, where the protagonist fully commits to their course of action.

If you struggle with boggy middles, I highly recommend crafting a strong midpoint to hold your middle together.

The middle is where the story really happens.

Just like a good beginning sets up expectations, and a good ending resolves the story questions, the middle is where it all gets explored. It's more than just the stuff between the inciting event and the climax.

The middle is about deepening the story. It’s not about adding more, it’s about fleshing out what you have so the beginning and the ending come together in a way that satisfies your reader.

A good middle is the heart of the story.

EXERCISE FOR YOU: Take five minutes and review the middle of your current manuscript. Identify which of these elements it has, and if they pass muster. If you discover you’re missing some (or even all), then brainstorm ways to revise and craft a middle readers will stay up all night reading.
What are your favorite middles?
*Originally published March 2011. Last updated October 2020.
For more help on plotting or writing a novel check out my Plotting Your Novel: Ideas and Structure.