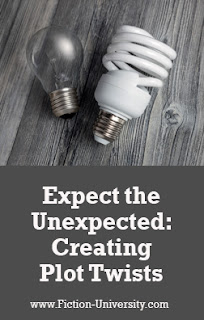 I'm up against a deadline this month to get a manuscript finished, so I'm dipping into the archives again and updating a reader favorite. Enjoy!

A great plot twist is a wonderful thing, be it in the books we write or the ones we read. We revel is that unexpected event or revelation that changes everything we thought we knew and takes the story to a whole new level. We delight in those surprises that make us think, "wow, that was awesome. I never saw that coming."

Trouble is, knowing you want a plot twist is a lot easier than coming up with a good one. There's no formula for devising a great twist, because every plot is different and any number of things can work in a novel.

My trick for twisting my plot is pretty simple:


It's usually obvious what's going to happen in a novel in a general sense. A protagonist gets caught, but she escapes. A dire threat is made, but the characters find ways to avoid it. The protagonist's life is in grave danger, but he finds a way out of it.

It's exciting, yes, but overcoming the obstacle before them is a protagonist's job, and readers know that. They expect them to win, they just know it'll be hard to do it.

Readers know the hero won't die. They know certain things won't happen no matter how much you dangle a threat over their heads, because the story would stop dead if it did. As high as the stakes seem on paper, they're really false stakes if there's no chance they'll actually happen.

This is where the tricky thinking comes in.


Which is a lot easier said than done, but it does work. I start by what I'd expect if I were reading my book. What paths are clear, what plots are unavoidable. What is the most obvious path or outcome for the scene.

If you outline, check and see if you're building predictability into it.

Sometimes I inadvertently plan predictability in my outline, with lines such as, "Nya breaks friends out of jail and escapes." Right there I've clearly stated what readers are going to expect to happen because that's what is going to happen. Odds are every reader will expect Nya to win in this case.

This gives me the perfect spot in which to defy expectations. Instead of breaking them out, or even failing and getting caught (the next most likely scenario), I consider what else might happen.
It doesn't take much effort to devise a list of possible outcomes readers won't be expecting. Even if they aren't a true twist, they're still less predictable than the original.

Look at your own scenes and pinpoint the obvious outcomes--even if they're exciting and wonderful and do all the things a good scene should do--and determine if the scene is too predictable. Is there a possible twist there?

Once you have some candidates:

Brainstorm for the Unexpected

Sometimes it's good to just free think and see what you can come up with. What is the most obvious thing to do in that scene? Scrap that idea. Now what's the least likely thing to happen? Most times, you can scrap that idea, too, because it's so far off in left field it won't work for the book. But it usually loosens your brain enough that you start thinking about things that are unexpected, but no so far off.

Really brainstorm, and don't think about practicality at this point, such as, "What works for my insisting plot." Sometimes you need to tweak a little later to improve the story now.

When something grabs you, start testing how it fits into your scene and overall plot. Don't discard something because it doesn't fit or would require a lot of revisions--let it simmer and see if a great twist develops from it. A twist is a surprise, and if it was an obvious fit, odds are it wouldn't be a twist.

(Here's more on Planting the Clues and Hints in Your Story)


A twist doesn't have to come from the plot. You can also surprise readers by revealing information that ties into the problem and affects that plot. You may have your protagonist resolve this issue exactly as the reader expects, but then you slip in a major secret or detail that blows their minds and changes the meaning of the events they just saw. So what they expected, isn't at all what's really going on.

(Here's more on The Joy of Discovery: Keeping Readers Hooked Through Story Revelations)


Ask the delightful, "what's the worst than can happen?" question on a variety of levels.

The "worst thing" might not be an external physical thing about to hurt the protagonist. It might be something that tears her world view apart, or shatters her beliefs or makes her doubt something she  always trusted. It might be having to choose between her and a friend or loved one. What ways can you rip your protagonist apart emotionally as well as physically?

(Here's more on Plotting for the Thrill: Making the Most of the Worst That Can Happen)


Is anyone not who the reader thinks they are? An unexpected betrayal can surprise the reader and change expectations. Or someone who's been lying about information the protagonist thought was reliable. Or maybe the protagonist has been lying and is finally forced to fess up. Lies don't have to be for nefarious reasons either--a lie told with good intentions can be just as effective.

(Here's more on How Could You Do This to Me? When Characters Betray Other Characters)


You can even do the unthinkable and let the protagonist lose and the bad guy win. Everything she's been fighting for is gone and now she has to regroup and find a way to go on. This is an extra sticky one though, because it can be easy to make your reader feel like everything they just read was pointless. Make sure that even when you let the protagonist lose, what she went through to get there still has meaning and wasn't a waste of the reader's time.

There are lots of ways to defy expectations if you spend time thinking about it. You can even ask your friends or critique partners what they think would happen next in X situation.

Then you can do what they won't expect.

What are some of your favorite plot twists?