Writing Transitions: How to Move Smoothly Through Your Novel 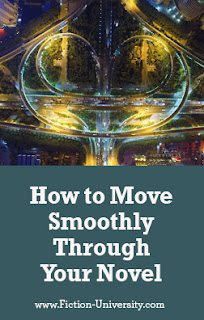 Just a heads up that I'm at Romance University this week, talking about plotting a novel when you don't yet know all the details of the story. Come on over and say hello!

As writers, we spend a lot of time on our scenes, but we don't always pay enough attention to how we move from scene to scene. But how we move our readers from line to line, paragraph to paragraph, scene to scene, and chapter to chapter all lead the reader though our story. If we don't do a good enough job, they won't get very far in the novel. Jarring jumps, awkward shifts, missing information, can all knock a reader right out of the tale.

And we don't want rough transitions that make readers give up on the book.


Moving from Chapter to Chapter


Chapter transitions are probably the easiest--we end with something compelling to entice readers to turn the page. That can be a cliffhanger, a secret revealed, the revelation that there is a secret, a foreboding piece of dialogue or imagery, a major decision to be made, and so on. It can be almost anything, as long as it makes readers want to know what happens next.

And then it can get tricky.

The opening of the next chapter is just as important, if not more so, since this is where you can lose readers if you don't fulfill your chapter-ending promise This is the line that answers, or begins the journey to the answer you posed at the end of the previous chapter. This is what readers want to know about.

Ignoring that curiosity is a good way to make readers feel tricked, and then they won't find those clever chapter endings compelling anymore. They'll know you won't follow through. Ending with something cool about to happen, then jumping ahead and never resolving that, gets old fast.

This holds true even for books with multiple point of view characters. It's tempting to end on a dire note, or drop a bomb, shock readers and make them desperate to know what happens next, but then it switches to another POV character, and it starts all over again.

With this type of transition, you have to work much harder to keep readers interested and not encourage them flip ahead (or skim) to find out the answer to the chapter's ending. Your next chapter openings have to be even more compelling to promise readers that if they stick with you, it'll be worth it.

Transition Check: Did you satisfy reader curiosity, or did you jump ahead in time or location and flashback to deal with the chapter ending? Or worse, ignore it altogether? If you're using multiple POV characters, did you start off with something equally interesting or let the pacing drop in the next scene and start over?

(Here's more on ways to end a chapter)

Moving from Scene to Scene


Scene breaks are just as important as chapter breaks and follow all the same principles. Any time you break you give the reader an opportunity to set the book down, as breaks are natural stopping points. You might even feel the urge to offer good stopping points, such as having a character go to bed or set off on a trip. But without something to entice readers to read on, why would they come back?

Of course, breaking a scene to move the story to another location, time, or character is an effective tool. We also don't want to bore our readers with unimportant details or events that happen between one scene and the next.

Try offering a mystery or tease, same as you would with a chapter ending. Often, scene breaks are softer, relying on the building sense of doom to carry readers forward. A decision has been made, the stakes have been stated, and now we're going to see how it works out. Chances are, you've got good tension building there, so start the next scene building off that tension and keep it going.

Transition Check: Did you end the scene with something to draw readers forward, or did you let the protagonist sleep, travel, or do something else that lets the tension and pacing drop? Did you start the next scene with things in motion, tension building, or did you just set up the scene to come?

(Here's more on when to add a scene break)

Moving from Paragraph to Paragraph


Paragraphs work just like chapters and scenes to move things forward, but in a more subtle way. Something in the paragraph will lead to the next, allowing bits of information to build upon each other toward a larger idea. But you don't want to just start and end with any old sentence. Many readers read (or pay close attention to) only the first and last sentence in a paragraph. If those don't flow well, the reader could get lost.

Large paragraphs are prone to readers skimming, since they're often full of description, exposition, backstory, etc. The first line is important. You want it to grab interest and show this paragraph is worth reading.

That doesn't mean the first line of every paragraph has to have the same impact as the first line in your book, but a line that offers nothing intriguing is one that suggest that paragraph isn't worth reading. It might easily be skipped, and if readers skip too many, they may decide the book is boring and nothing is happening.

Once you have them hooked in the paragraph, make sure you end with a punch. The last line is often where important information is revealed, and that's what readers are after. It's the payoff, and the detail they're remember.


Killing your own hook: It's not uncommon for us to bury the strongest hook in the middle of the paragraph, then feel then need to explain why it matters. Avoid this impulse and let the hook grab on its own. Wanting to know why it matters might be exactly the hook you want to keep the story flowing.

Awkward narrative focus: Paragraphs show flow smoothly into one another, with one idea leading to the next. If you're talking about planting a bomb in the cellar, a sudden paragraph about how the protagonist's brother was killed by a drunk driver and that's why he's blowing up the house will likely make the reader stumble and lose their focus. Loss of focus means loss of tension, which could lead to loss of reader.

Shifts in location: Avoid changing location without telling the reader. One paragraph, the protagonist in the kitchen making a sandwich, then next they're on the couch flipping through the newspaper. If your character moves locations, let the reader know or they'll get lost.

Transition Check: Did your paragraphs start with something to draw readers in, or just state a bland fact? Did they end with a punch, or just end? Did you bury the hook line? Were there any off topic paragraphs stuck in the middle? Were similar thoughts grouped together, or were they mixed throughout? Did you change locations without telling the reader?


Obviously, you can't do the same things on a sentence by sentence basis, but you still want every line to draw readers seamlessly into the next. Something that feels awkward or out of place can jar readers out of the story and make the prose clunky.

If you change direction, make sure readers have enough clues to follow the shift and keep up. This happens most frequently when you have a character reacting to something before the stimulus is even shown, such as "Bob fell flat on his face, tripped by the zombie arm lying across the sidewalk." We see Bob fall before we ever see him trip.

(Here's more on stimulus and response)

Transition Check: Did your sentences flow logically from one idea to the next, or were there off topic bits mixed it? Did you show characters reacting to things readers hadn't seen yet, or did your stimulus-response follow each other logically?

Checking your various transitions is a good way to spot areas that aren't working but you're not sure why. It feels like all the right pieces are there (and they often are), but the scene drags, or is clunky, or just isn't grabbing the attention it should. Sometimes, it's a matter of shifting things around so they lead readers where you want them to go.

How much attention do you give your transition? Do you plan them, or do they happen naturally?