Story Structure: How the Opening Scene Works in a Novel 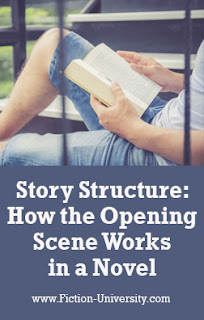 The opening scene is the preview for your entire novel.

Other writers don’t have this issue, and write whatever comes to them, knowing they’re going to revise it later. They don’t know what the right opening scene is until they write the final scene.

Both (and everything in between), are perfectly acceptable ways to write opening scenes.

Which is good, because opening scenes need to do a lot. They need to introduce the protagonist, the setting, the hook, the problem, show conflict, create voice, craft intriguing story questions, ground readers, make readers like your characters, and the list goes on and on.

An opening scene is a taste of what’s to come in the novel, a preview of the amazing and wonderful story you’re about to share with readers. It’s a promise you make that they’re not wasting their time by trusting you. But mostly…

The opening scene gives readers reasons to read the novel.

And if you don’t, they won’t read it. Hence all the fuss and focus on first pages and opening scenes. You don’t have time to ramp up to the good stuff, because most readers won’t wait chapters before something worth reading happens.

If no one is reading past your opening scene, odds are you’re not offering that taste of what’s to come, but serving leftovers. You’re giving readers backstory that explains the characters, infodump that explains the world, or telling readers about a situation that really has nothing to do with the conflict of the novel. Maybe a combination of all three. You’re explaining why they ought to read the novel, not showing the reasons they’d want to read it.

The opening scene is the tease that makes readers want more.

Quick note: I’m including movie examples here because the turning points are more clearly defined, and they’re easier to watch and study than novels. But the same principles apply.

What it is: The opening scene is the first glimpse readers get of the novel. It’s an audition for their time, and provides the critical elements and details they’ll need to understand the story, protagonist, and setting. Some novels open with the story, but others open with a prologue or glimpse of something outside the main characters and time frame.

There’s no one right way to open a novel, just one primary goal—intrigue and inform readers enough to make them want to keep reading.

When it happens: In the first several pages of the novel, perhaps the entire first chapter. If the story opens with something besides the main character, then you typically see their first scene immediately after that scene.

The first thing readers see sets the tone and expectation for the rest of the novel. Make sure what you show them, matches what they’re about to read.

What its function is: The opening scene has one job—to hook readers and make them keep reading. It’s not to explain the story to come or fill readers in on who the characters they’re about to meet are.

Honesty is important in an opening scene. It represents the novel and its characters, and you want to set the right expectations and make promises you can keep. If your story is dark, don’t open with a light, funny scene, and vice versa.

It’s also important to keep in mind that for many stories, the premise itself works as the hook, even if that’s not seen in the opening scene. A wormhole to other planets that explains the pyramids, a televised game where kids fight to the death to win food for their districts, a scruffy, tomboy FBI agent who goes undercover at a beauty pageant.

Why it's important: It’s glorified sales copy. That might sound strange, but it’s there to entice readers to buy and/or read the book. The cover copy might intrigue them to read page one, but if the opening pages don’t satisfy, the book won’t be read. You’re “selling” your novel to readers in those first few pages.

In essence: You’re saying, “Here are some people in a situation you might find interesting. Want to read on? Please say yes.”

(Here’s more on Open Up! Writing the Opening Scene) 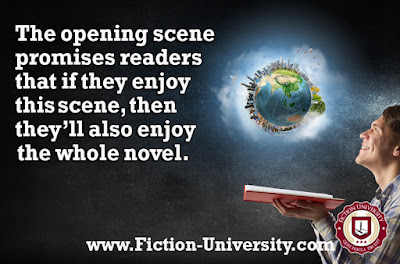 Things to Remember When Crafting Your Opening Scene

1. It starts with something interesting happening (the hook).

“Something happening” is a piece of advice that misdirects a lot of new writers, because it often makes them think they need to start with summer-blockbuster-movie action. You don’t. It just means that a character (usually the protagonist, but not always) should be doing something worth reading about when the book opens.

Events already in motion gives the plot a place to go so the story feels like it’s heading somewhere. The protagonist has a goal and is acting to achieve that goal—even if the goal is to avoid something bad, or to try not to act if acting would be bad for them.

Pretend your opening scene is a person telling you about their day. Are they a spinning a tale that piques your curiosity, or are they a five-year-old giving you every detail about how they got dressed?

2. It introduces a compelling character and/or situation.

Different genres have different opening scene needs, but making them “compelling” is a must. Sometimes you do that by creating a sympathetic character your readers can relate to, sometimes you introduce a likable character readers want to hang out with, and sometimes you do it by showing a twisted individual about to do something horrible readers can’t look away from.

The more plot-focused the novel, the more likely the opening scene will be a situation than a character. Crime novels, thrillers, mysteries, science fiction, fantasy, suspense, and other similar novels often open with something happening that’s not in the protagonist’s point of view, but it’s an event that relates to what the protagonist is about to face in the novel.

The more character-focused the novel, the more likely the opening scene will be the protagonist facing a personal problem. Romances, women’s fiction, literary, historicals, and other similar novels often open with the protagonist living their normal life when something goes wrong in that life.

A compelling character or situation is one that humanizes what’s going on, and makes it easier for readers to relate to and connect with the story.

3. It evokes emotion from readers.

It’s all good. Just make readers feel something besides boredom or confusion.

Emotion is what separates a story from a manual. It makes the novel about more than just absorbing the facts surrounding “what happened.”

4. It grounds readers in the story world.

This is one of the harder aspects of a good opening scene, because a story world encompasses so much. It’s easy to overdo it and share so much that readers get overwhelmed. It’s also easy to share so little that readers feel lost and can’t quite connect to the novel at all.

Good grounding gives readers just enough information to understand the scene, who the characters are, what they’re trying to do, and the problem (conflict) in the way of them doing it. It often shares why they’re there, but that’s not always necessary. It might show the stakes, but again, sometimes that revelation comes later.

This is a place for subtly, so resist the urge to bash readers over the head with the details. Hint just enough to provide context, but not so much you give everything away (unless knowing it enhances the story, not kills the mystery).

An opening scene that creates interest and curiosity is good. One that creates confusion and ambiguity is bad. And there’s a very fine line between those two.

5. It hints at all the amazing things to come.

Unless your inciting event happens in your opening scene (which it can), odds are the opening problem is a catalyst that gets the protagonist to the inciting event and the main plot of the novel. So you’ll have hints and small snippets of where the story is going, but you won’t give everything away just yet (otherwise there’s no reason to read on).

Typically, the focus is on the characters, the world or setting, and the general situation. You introduce a protagonist readers will want to know more about, and show them acting like a person worth following. You show an intriguing world that poses some interesting questions readers will want to see answered. Then you wrap it all up in a situation with uncertainty about how it will unfold to make readers want to see what this character they like does about that situation.

You’ll also show genre and tone. If this is a humorous contemporary romance, your opening scene will be funny, and include the critical tropes of the romance genre (the meet cute, flirty banter, likable characters with issues that lead to romance). If it’s horror, your opening will horrify.

The goal isn’t to give everything away or telegraph the secrets and twists, but to give readers enough context to understand the kind of novel it’s going to be.

(Here’s more on 5 Ways to Hook Your Readers)

The opening scene promises readers that if they enjoy this scene, then they'll enjoy the whole novel.

If the opening scene has done its job, then readers will be drawn in, eager to learn more about the characters, world, and situation you’ve introduced them to. They’ll have a sense of what to expect, and some ideas of where the story might go, but won’t see the ending coming before the book has even started.

EXERCISE FOR YOU: Take five minutes and examine your opening scene. Is it doing all the right things to hook readers and make them want to keep reading?
Here's the entire story structure series:
Are you showing the right preview of your novel?
For more help on plotting or writing a novel check out my Plotting Your Novel: Ideas and Structure.