Writers: Stop Being Nice to Your Characters 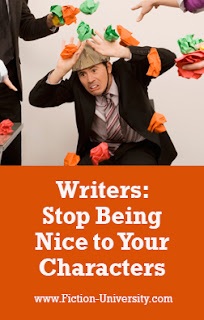 Going easy on your characters often results in a plot that no one wants to read.

There are some writers who cringe at the thought of putting their characters into danger. Caring authors who encourage and look after their fictional charges as they send them on their literary ways.

I’m not one of those writers.

I love to torment my characters. I cackle with glee when I devise something horrible to do to them. Maybe it’s my dark side coming out, I don’t know.

Take the characters in my teen fantasy series, The Healing Wars. The heroine, Nya, never gets a break from me. First, I kill most of her family (this is before the story opens). Then, I give her an evil “is it a blessing or a curse?” magical ability (she can heal, but only if she shifts pain from one person to another). To add insult to this injury, I give her a little sister who can heal without the nasty drawback and all its nastier side-effects (because ya know, being jealous of your little sister really bites).

You’d think that would be enough to make my dark side happy, but no. It wanted more. It whispered into my mind…let’s take away that little sister, and make poor Nya have to reveal the one secret she’s been hiding her whole life in order to save her. And while we’re at it, let’s toss in some agonizing decisions, some physical pain and suffering, and a mistake that will haunt her rest of her life (and all that’s just in the first book, The Shifter).

I’m smiling as I write this. Really. This was all so much fun to do, because conflict and struggle are what stories are all about.

The more strife we heap upon our characters, the more interesting they’ll become for our readers.

Many novels fail from a lack of conflict. There’s just not enough opposing the protagonist, and they don’t struggle enough for that win in the end. The novel is just a detailed explanation of “and then Bob found the love of his life” or “and then Sasha found her inner strength.”

Not that there’s anything wrong with either of those endings, it’s how the characters get there that matters. And far too often, those characters don’t work hard enough for it. They get what they need with little to no effort on their part.

Here are things to consider when creating conflicts in your novel:

Not being nice isn’t the same as being mean.

You can make characters struggle without putting their lives in danger, since not every story requires a life and death situation. For example, romance novels have plenty of strife and struggle, and the only thing at stake is the protagonists’ happiness—a far more compelling stake than death, by the way.

“Not being nice to your characters” means not giving them what they need to solve their problems. It means taking away their advantages, and giving them a few disadvantages just to make them work for those wins. It’s letting them worry they’ll fail, and making them fear they’ll have to face whatever it is in the story they don’t want to face—and then making them face it.

Give your characters real problems and let them earn their victories over those problems.

(Here’s more on Do You Suffer From NWS?: Living With Nice Writer Syndrome)

This is one of the more underused tools in weak plots, because choices create the plot. Without them, all you have is a series of things the protagonist does.

A difficult, or even better, impossible choice creates uncertainty for readers. Uncertainty creates tension. Tension keeps readers invested in the story. A conflict with an impossible choice at its center is story gold. In order to move forward in the plot, to achieve that goal, the protagonist has to make a tough choice that has real consequences no matter what is chosen.

And again, this doesn’t have to be life or death. A twelve-year-old girl who’s allowed to bring one friend to Disney World for her birthday, who then has to decide which of her two best friends she’s going to invite, is a hard choice. Someone’s feelings are going to get hurt. A friendship could hang in the balance. For a middle grade novel, this is a major conflict that doesn’t involve saving the world or slaying monsters.

Compelling conflicts don’t need to be catastrophic problems, they just need to force the protagonist to make hard choices.

(Here’s more on The Impossible Choice: A Surefire Way to Hook Your Readers)

Growth comes from lessons learned. And some lessons hurt.

In some genres, that lesson will cost lives, but not all books require a literal death. Painful lessons typically come with a loss, but that loss can be an idea, a false belief, or even a dream. Emotional pain can be just as effective as physical pain—it all depends on the story and the lesson being taught.

If everything always works out in a character’s favor, they won’t learn the lessons they need to grow. 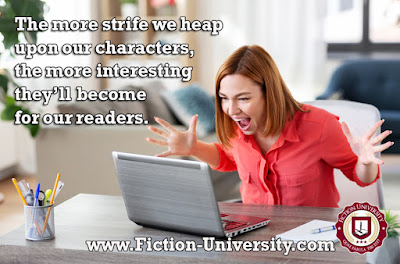 The struggle makes the story, so don’t wimp out just because you don’t want to be mean to your characters.

That meanness will result in a better novel—even if that novel is light, fluffy, fun. Your conflicts will be different from a serious novel, but the protagonist will still struggle to resolve problems and have to fight to get what they want.

And as a reward, both you and your characters can get a happy ending.

Despite my dark side being in control most of the series, my light side wanted some reward for all Nya’s hard work and pain. I may have torn her world apart, killed off some of her friends, and destroyed her home, but I also found her a few rewards to ease her suffering in the end, and gave her a happily ever after. Mostly.

Though I bet overall, Nya is happiest that I was finally done with her.

EXERCISE FOR YOU: Take five minutes and examine how easy it is for your protagonist to get what they want in your novel. Are they struggling? Do they have to make hard choices? Is there enough conflict to keep readers engaged?

Do you like to be naughty or nice to your characters?
Find out more about conflict, stakes, and tension in my book, Understanding Conflict (And What It Really Means).