How to Sneak Flashbacks into Your Novel 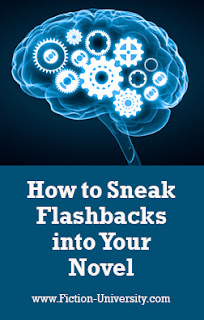 By Spencer Ellsworth, @spencimus
Part of The How They Do It Series

JH: Flashbacks are on the "use with caution" list of writing, but done well, they can enrich a novel. Spencer Ellsworth share thoughts on how to make flashbacks work in your story.

Spencer Ellsworth is the author of The Great Faerie Strike from Broken Eye Books and the Starfire space opera trilogy from Tor. He lives in the Pacific Northwest with his wife and three children, and would really like a war mammoth if you know a guy.
Website | Twitter | Goodreads

Hi, my name is Spencer and I’m a writer who loves flashbacks.

If you, too, love a good moment from the past bursting in to the present, a vignette of meaning suddenly called to light, or a secret revealed by a remembered conversation, you belong in this support group. Have a cookie. Think about things for a while—in fact, feel free to recall a formative memory while your soulful eyes stare into the distance.

Writers aren’t supposed to lean hard on flashbacks. They’re a lazy diversion that undercuts pacing, or so we are told.

They work much better in movies and TV, when you cannot see inside the character’s head, and so flashbacks are a crutch for many screenwriters. In fiction, you don’t need the more obvious visual tricks of the trade like film does, and characters should be able to simply associate and come to conclusions rather than melodramatically calling up the past.

Sight, though, is a poor associator all on its own. Fiction can tell you how a smell or a sound evokes something, long after the time has passed. Only fiction can quite describe how the smell of crockpot beef makes me think of my grandparents’ kitchen, or how “Everlong” recalls my nineteenth year so strongly I can taste the dirt-cheap cereal I lived off.

A good flashback, in fiction, can go much farther than it would go onscreen.

There’s two principles stolen from other realms of writing advice that we, in our support group, can sneak into our flashbacks.

Shh. Don’t tell the other writers. Let’s be bad.
(Here's more on What "Stranger Things" Can Teach Us About Flashbacks)

The first principle is the Overarching Rule of frame stories: the frame narrative must be as compelling as what it frames. Scheherazade’s clever thieves and out-of-their-depth fishermen are not only compelling in and of themselves, but because their exploits will save Scheherazade’s head from the vicious king for another day.

The second is the plain old observation that scenes mirror the greater narrative—every scene should have some kind of rising action, character development, and climax.

Flashbacks need to use both these principles. Everyone knows that a flashback is crucial to explaining something in the narrative, but that one must be very careful breaking tension to give backstory.

You can break tension if your flashback has not only internal tension, but adds to the tension and character growth of the overall story.

Take Scott Lynch’s The Lies of Locke Lamora. That book breaks a good dozen new writer rules and still manages to be so great it makes me angry. A good third of the book is taken up by flashbacks that explain how the eponymous Locke rose from being a street rat to the master thief pulling master con jobs in the present timeline.

Lynch balances a specific kind of character tension to keep the flashbacks relative to the present that frames them. Young Locke is absurdly clever, but foolhardy, constantly disrupting the careful balance of the criminal underworld.

Older Locke seems to have overcome said foolhardiness, but pretty quickly, an invested reader will start to wonder if he really has, because present-day Locke’s cons are so big and so ambitious that little foolhardy Locke seems more and more to predict a downfall.

It’s no surprise that after shit hits the fan, (not a spoiler, because it’s a book about a con job, come on) the flashbacks stop and the book barrels ahead. By that time, Lynch has done so well setting the tension of a young, too-clever Locke against an older, possibly-wised-up-possibly-not self, that the flashbacks have been crucial to the protagonist we believe in for the second half of the book.
(Here's more on Cover Me, I'm Going Back: Tips on Writing Flashbacks)

So go ahead and use flashbacks. Break some rules. Just remember to treat flashbacks with the respect you give any other scene

And one day, when you’re older, you’ll recall this day. You’ll develop even more as a character, while gazing soulfully at the ocean, reliving the moment.

About The Great Faerie Strike