An Easy Way to Create Conflict in Your Novel 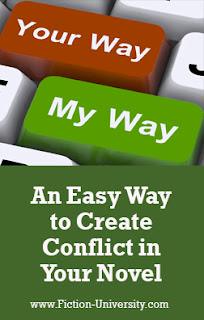 Conflict is vital to a novel, but that doesn't mean it has to be a fight.

A common misconception with conflict is that is has to be antagonistic. Characters should fight, argue, and plot against each other in the worst ways, but this is just one of the many ways in which you can create trouble in your novel.

It's also one of the least interesting, because with most antagonistic fights, there's one right side and one wrong side. Usually, the protagonist is on the right side, so all we're really doing is writing an argument readers already agree with—which might work for reality TV, but it's not as much fun in a novel.

Friendly disagreements can also create conflict, especially between people who love each other dearly.

The disagreement you have with your spouse affects you much more strongly than the one you have with a co-worker you barely know. Having characters disagree on what to do or how to behave offers layers of both external plot conflict and internal emotional conflict.

Conflicts that occur between friends and allies are more interesting because:

When readers like a character, they're more invested in that character, so the stakes are higher. They care what these characters think, and how disagreeing with their friends is going to affect them and their goals for the novel. They also don't want to see these characters hurt, and if the protagonist chooses to ignore their friends and allies, that could cause resentment and bad feelings.

It allows the protagonist to be wrong without the antagonist winning.

Having a protagonist who always does the right thing and never steps into the dark side misses an opportunity to show their flaws and weaknesses—but them being wrong might have greater consequences than you want for your story.

A disagreement with an ally that explores the protagonist's bad judgment or belief lets you to show the human side of that character. This is especially helpful in stories with strong character arcs rooted in the protagonist's emotional growth—letting them be wrong shows where and how much they need to grow.

It keeps characters from being yes-men to your protagonist.

If every character agrees and supports the protagonist all the time, they end up feeling two-dimensional without lives or opinions of their own. Remember, even when people agree on what has to be done, they don't always agree on how or even why. Disagreements let your characters act like real people who can affect the outcome of the plot.

There is often no "right" side, just a difference in opinion.

This is my favorite aspect of a disagreement between allies. The ethical gray area encourages readers to imagine what they might do in the same situation. It also lets you examine multiple sides of a problem and show there is no clear path to resolving the issue—which not only makes it more interesting, but keeps the plot unpredictable.

It creates uncertainty in the reader.

Voicing different concerns and ideas allows you to plant seeds of what might happen in the story, keeping readers guessing and making them wonder how events will unfold. It's also a fun way to drop red herrings and distract readers from what's really going on. 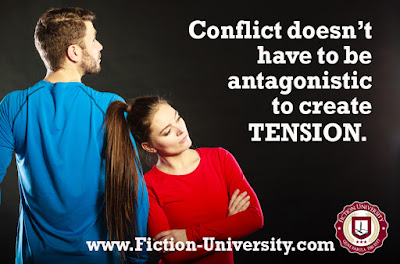 Let's look at some ways in which characters might disagree and create conflict in a scene:

1. Disagreements over the right course of action

This is by far the easiest way to cause trouble between friends, as few problems have just one solution. Let allies disagree on how to resolve a problem or how to deal with a difficult situation. Maybe one wants to take the easiest path, while another recommends the safest, and still another thinks the most expedient is the way to go. Give each choice benefits and risks to keep the plot unpredictable and the tensions high.

(Here’s more on Why Every Writer Should Watch “Mama”)

2. Disagreements on how to behave

Character-driven novels can have a lot of fun with this one. Improper behavior could land a protagonist in serious trouble and lose the respect or support of friends and allies. Maybe a character is behaving out of character, or crossing lines they shouldn’t cross. Or maybe they just have different opinions on what’s “right” about the situation.

This also gives you a chance to show the difference in ethical or moral beliefs in a story without being didactic.

(Here’s more on What Are Your Characters Not Saying?)

3. Disagreements on deciding what something means

Remember back in school when you'd sit with your friends and analyze what the slightest gesture from your crush meant? Characters can get over-analytical, too.

Maybe the protagonist is sure a clue means one thing, while their ally insists it means something completely different. And before you decide who's right—brainstorm both options and see which leads to a better story (even if neither one turns out to be right).

4. Different opinions of other people

Anyone who's ever made a bad judgment call about a person knows the pain this can cause.

Just because the protagonist is sure the hottie who helped them out is a good person and worth trusting doesn't mean the best friend has to agree.

This is especially useful when you need a plausible reason not to trust another character (or need to trust them), but none exists. A friend with a bad feeling or an existing prejudice can convince the protagonist to ignore their own feelings.

5. Different views on the seriousness of a situation

Some characters think everything is life or death, while others don't take a single situation seriously.

Allies who think the protagonist is overreacting (or not reacting enough) can sway how they decide to solve the problem they’re facing. Trusting the wrong advice might lead to terrible consequences, which in turn can lead to even more conflict down the road when the protagonist is leery about any advice from that character.

Conflict doesn’t have to be antagonistic to create tension.

Disagreements between characters is a wonderful way to add conflict to a scene without causing unnecessary (and unproductive) fighting. They can raise tensions, further develop a character, and even help with world building by showing how people of that world think and feel.

EXERCISE FOR YOU: Take five minutes and brainstorm how your characters might disagree, or have differing opinions than your protagonist. How would that affect the story? Pay particular attention to any scenes you feel lack conflict, are slow, or where you’ve gotten feedback that it lacked tension.

What are some ways your characters disagree in your novel?
Find out more about conflict, stakes, and tension in my book, Understanding Conflict (And What It Really Means).