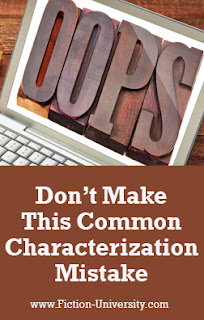 A flat character can kill an otherwise good story.

I was chatting with an editor of a publishing house recently, who mentioned a problem he sees in a lot of the submissions that cross his desk.

Cardboard characters. No sense of depth. Names, but not people. Without that characterization, it's impossible to connect with the characters or the story.

Compelling characters are vital to a novel, so if you want readers to love and connect with your characters, they need to feel like real people. So remember:

Characters aren’t just “people with names who do things.”


Characters drive the plot, not the other way around. It’s their choices and needs that cause them to act and make the plot happen.

Show who they are by how they act, and how they try to get what they want.


Characterization should be easy, because we’re showing our characters being who they are.
Imagine you character needs a new phone, but can’t afford one. How might they obtain one? They might:
Each of these possibilities says something different about the character. They each come with potential personality traits and philosophies about the world.

Someone willing to steal money has a different outlook on life than someone who will get a second job to afford something they want.

How characters choose to act says a lot about who they are as people.

Show their flaws in action. Let them make mistakes.


There’s an old saying that our flaws make us who who are. This is just as true for our characters as for us.

Flaws keep characters from being perfect, and perfection in a story is boring. It’s the mistakes that not only create interesting plot points, but compelling characters as well.

A character with flaws is more relatable, and this more compelling to readers. But not just any flaw will do. Look for flaws that:
The stronger your character arc, the more critical flaws will be for your characters. Facing these flaws and getting past them to be happy is the entire point of that character arc.

(Here’s more on Do Your Characters Have the Right Flaws?)

Show their good qualities by how they treat others.


Great characters also have redeeming qualities, even if they’re not the best people in the world.

Dexter is a serial killer, yet he’s trying to only kill bad people. Han Solo is a scoundrel and a smuggler, but he’s also a charmer who does the right thing when it matters.

Something about your character shows why readers ought to like them. That something, is typically a core component of their personality, and often the reason they’ll succeed in the end.

Things such as:
And so on, and so on. Whatever it is, there’s something about the character worthwhile that makes them worthy for readers to spend time getting to know them.

If they aren’t likable, they’re at least compelling in some way.

(Here’s more on The Triangle of Likability: How to Make Your Characters Come Alive)


Human nature is interesting, and the why is usually more intriguing to readers than the what. But when you forget to show (or even include) the motivations of the character, you're missing an opportunity to pique reader interest and draw them into the book.

Motivations hook readers. A character acting for strong reasons keeps readers engaged. So make sure you make them wonder:
The why keeps readers guessing, and makes them invest time in understanding the characters in the story.

Let readers see inside the character and peel back those layers one by one over the course of the story. Show why:
Whatever your characters want, show why they want it. And more importantly—show why it matters. It’s not just about the plot. It’s personal, too.

Character motivation is more than just saying “I want it because I want it.”

Just like actors, characters gave give a flat and empty performance if all they do is move around the stage and recite their lines. It’s the sense that these are real people with real problems that make readers care about what happens to them.

Give you characters enough depth to make them come alive for your readers. Make them more than just “names that do stuff.”

How much effort do you put into your characterization? Who are some of your favorite characters—your own or another author’s?