Want to Improve Your Writing? Change Your Thinking 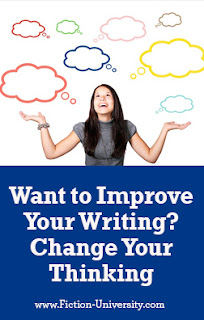 A mental shift in how we think about our writing and process can change our perspective, and thus, help us see the things we’ve been missing.


A long time ago, when I was still fairly new to writing, I had my mind blown by a simple “change of perspective” in how I looked at writing. It was a light-bub moment that finally made me understand something I’d been struggling with at that time—point of view.

In the years that followed, I’ve had plenty moments where changing how I viewed or thought about something writing-related helped me understand it, or use it better. As I’ve spoken with other writers, I’ve seen the same lights go on in their eyes as they looked at something they’d struggled with and finally saw things click into place.

There’s a reason there is so much writing advice out there, from so many different people, and so many different approaches to essentially the same stuff. We all learn a little differently, and a technique or theory that works for one writer might fail miserably for another.

My own theory—if you’re struggling with something, come at it from a different direction and see if it helps. For example:

My struggle with point of view? I got past it because of a simple comment in a critique. In a scene where my protagonist sees a rowboat, my critique partner wrote:

“You used “the rowboat” here, which suggests she knew the rowboat was there and was looking for it. Did you mean “a rowboat,” which would suggest it was new information to her? It seems like she didn’t know it was there.”

Changing how I viewed these two words made a world of difference, because it changed how I approached the revision process as a whole. I used to get caught up with tweaking the text before I’d finished making sure the plot and story were sound. I’d polish text and end up cutting it, or worse—feel it was “done” and not cut or change it when it needed it.

Looking at edit and revise as two separate activities allowed me to focus on the part that needed to be done and ignore the rest. I didn’t worry about the text because I was revising, not editing. I focused on the text when I was editing and done revising. I no longer made every chapter “perfect” before moving on, because I didn’t need to edit until my revision was done. It streamlined my entire post-first draft process.

(Here’s more on the difference between editing and revising)

One last example made writing a scene much easier. I’d found myself thinking “What happens in this scene” versus “What are the characters trying to do in this scene?” This was inadvertently making me write scenes that lacked conflict and uncertainty, because they weren’t about a character trying to achieve a goal, but how my protagonist achieved that goal. It left no room for readers to wonder what might happen next, because everything was so obvious.

Once I shifted my thinking, my scenes got much stronger. My characters fought for their goals, my bad guys tried harder to stop them, and it opened me up to consider other possibilities in the scene that weren’t part of my outline. It let me think, “What did the characters do and how did those actions affect what others did?” Plotting became organic and natural instead of a series of described situations.

There’s an ebb and flow to writing, and we all have periods where we get stuck—either in a scene or in our own growth as a writer. When that happens, take a step back and think about why.
Writing is fluid, and that fluidity applies to our processes as well. Every writer is different, so it makes sense that how we write, and what helps us understand our writing, is going to change and evolve as we do. Everything we learn builds a stronger foundation under us and allows us to see writing in a new light. The more open we are to those changes, the more we grow as writers.

Looking at your writing from a new perspective can help you improve your writing and get past a sticking point—in both your skill set and your story. Don’t be afraid to try new things or adjust your thinking about old ideas or processes. You never know where those light-bulb moments will come from.

Where have some of your light-bulb moments come from? Has changing your thinking about an aspect of writing helped you?