What You Need to Know About Internalization 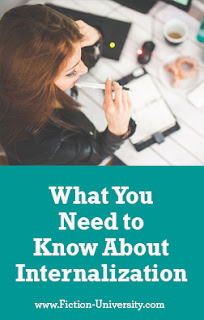 Before I dive in, a quick heads up that I’m over at Writers in the Storm today, chatting about a handy tip to help you get unstuck while plotting. And in case you missed it, I was recently on Jami Gold’s blog with some tips on brainstorming to find your novel’s plot. It’s been a busy month.

On to today’s topic…

I’ve always felt that internalization is one of the go-to tools in a writer’s toolbox. It’s a powerful and effective way to establish voice, show personality, craft subtext, and keep the narrative flowing smoothly from scene to scene. Pair this with a strong point of view and a good conflict and you usually wind up with story gold.

Let’s look a little closer at why strong internalization skills are so important:

Internalization Is Where the Character’s Voice Comes From


A character’s internal monologue captures how that character thinks, what matters to them, what they feel but can’t (or won’t) say, and how they interact with the world. Personality comes out in those internal thoughts and musings, because it’s the true nature of the character that only the reader sees. For example:

Imagine a protagonist has just been introduced to a new coworker (Jason), who is immediately rude, such as:


“This is Jason. He’ll be working with you on this project.”

Jason scoffed a took a step backward. “With this loser? I don’t think so.”

A simple exchange, but the protagonist can react in any number of ways. The internal reaction to the rudeness reveals a lot about that character:


Was this a joke? This had to be a joke.

Maybe volunteering to mentor wasn’t such a good idea.

What had he heard? If that rumor was still going around, someone was gonna pay.

Oh no, not again.

Of course. A jerk was to be expected on today of all days.

Each thought has a different sense to it, from disbelief, to anger, to even pleasure. These are people with a variety of personalities, and even if you use the same dialogue response, the tone changes based on the internalization that comes before it. For example:

Maybe volunteering to mentor wasn’t such a good idea. “Good to meet you.”

Fabulous, the perfect scapegoat. No guilt necessary. “Good to meet you.”

What had he heard? If that rumor was still going around, someone was gonna pay. “Good to meet you.”

Of course. A jerk was to be expected today of all days. “Good to meet you.”

Odds are you read the dialogue with slightly different inflections and voices that supported and further fleshed out the internal thought. And that’s the beauty of internalization. It allows the character’s personality to shine and their voice to come through.

(Here’s more on how to find your character’s voice)

Internalization Helps Define the Point of View and Narrative Distance


Where you narrator is isn’t always obvious from the dialogue or even action, but an internal thought positions how far the narrator is from the reader with a single thought. For example:


“Let me help you with that.” Before you drop and shatter it like you did the last one.

“Let me help you with that,” I said, before she dropped and shattered it like she had the last one.

“Let me help you with that,” Karen said. Before you drop and shatter it like you did the last one.

“Let me help you with that.” Before you drop and shatter it like you did the last one, Karen thought.

“Let me help you with that,” Karen said, before the woman could drop and shatter it like she had the last one.

Same dialogue, same internal thought, but notice how that thought is written suggests how near or far the narrator is from the reader. The tight POV versions sound closer and more personal than the more distant third person or third omniscient. It let’s readers know right away how much “literary space” is there.

(Here’s more on choosing which thoughts to italicize)

Internalization Helps to Show and not Tell


Showing how a character thinks about the world puts the details in their voice, with their judgment and opinions about it. It’s not the author explaining what’s there or how something works, it’s the character thinking about it or interacting with on his or her terms. Internalization makes it much easier to show, because we have a person who’s experiencing the things we’re trying to describe.


Told: The sun was shinning on the worst day of his life, and birds sang in the trees outside his door, unaware of his misery. His wife had walked out after twelve years of marriage. He’d thought they were happy. He’d been wrong.

Shown: Sunshine on today of all days, was wrong. It should be raining, dreary and cold, birds huddled in their nests instead of singing on branches like they hadn’t a care in the world. Mocking him with their whole “we mate for life” crap. He glared, but they kept on singing. Hope a cat gets you both.

In version two, we get an entirely different sense of the narrator and can see and feel his pain and anger. It’s more personal that the first told example. It also sets the scene in more vivid way than just stating the situation and setting.

Quick note...If you're writing a full-on omniscient narrator, then example one might be more acceptable. Take your genre and narrator into account here.

(Here’s more on showing, not telling, your internalization)

Internalization Balances the Narrative Between Action and Dialogue


It’s not always clear why someone acts in a scene, especially when they can’t come right out and say it. Internalization allows us to show motivation, goals, and even conflict, giving readers the information they need to understand what’s going on.


Lila took a deep breath, steadying herself. “I’m sorry, but I can’t do this anymore,” she said. She picked up her bag and slung it over her shoulder. “I’m leaving you.”

Lila took a deep breath, steadying herself. “I’m sorry, but I can’t do this anymore,” she said. It was pointless to say why—they’d shouted why at each other far too long already. Screamed it, whispered it, pleaded it. The why hadn’t mattered. She picked up her bag and slung it over her shoulder. “I’m leaving you.”

Example one doesn’t offer any indication as to why, but in example two, we get a different picture about what went wrong in this marriage.

Too Much Internalization Makes the Story Sound Melodramatic


You can go too far with internalization, however. This is especially true in young adult novels, where the angst tends to be a bit higher than an adult novel. There’s a fine line between mentally debating and whining, and when we cross it, the drama and emotion we’re going for can turn comical (and not just in young adult novels).


He threw their wedding photo against the wall. How could she do this to him? Twelve years. Twelve! Didn’t marriage mean anything to her anymore? Light winked off the shattered glass around the frame, broken and irreparable.

He threw their wedding photo against the wall. How could she do this to him? Twelve years. Twelve! All those bike trips down the coast, the lazy days when they’d watch cartoons in bed. She’d been his everything and he clearly had meant nothing to her. Had it all be a lie, or had he done something to drive her away? Maybe it wasn’t him at all. Maybe marriage just didn’t mean anything to her anymore. Light winked off the shattered glass around the frame, broken and irreparable. Just like us. Shattered and useless.

Odds are you have sympathy for the poor guy in version one, and by the end of version two you want to slap him and tell him to get a grip. The right amount of misery makes readers sympathize, but too much turns his grief into caricature.

(Here’s more on how much internalization is too much)

Internalization adds texture and life to our writing and provides clarity and context for our readers. It brings out the emotions in a scene and allows readers to really understand a character and how he or she is feeling. It works in tandem with point of view to help readers orient themselves in a scene and identify the narrator. Overall, it’s a handy tool that lets us as depth and meaning to our writing on a variety of levels.

How do you feel about internalization? Like writing it? Struggle with it?