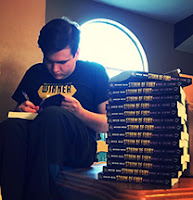 Andrew Wood writes epic fantasy. He loves stories, whether they be books, movies, video games or comics, and is always on the hunt for more. He grew up on books like Redwall, the Wheel of Time and Harry Potter, and from stories like these his love of writing grew. Now he works full-time to tell the stories he has in my heart, and finally force them on to paper where they belong. His first novel, Storm of Fury, was recently published through Inkshares. You can find him on Patreon under his name, where he releases monthly horror, fantasy and sci-fi short stories.

Take it away Andrew...

I work on many different fantasy projects at once, which means I’m constantly world-building as I divide my attention between them. When it came to building my worlds, I used to open up a Word document and just start writing. When I was finished, I’d have a bunch of documents detailing the different pieces of my world and stitch them together in a single file. Since then, I’ve found a better, smoother way to world-build in five steps that give me enough detail to start my story.

Step One: The World


Firstly, I’d recommend using OneNote. It’s an easy program to use and will keep you clean and organized. When I begin to craft a new world, geography is what I start with. What does my world look like? What places of interest and notability are there? What kind of flora and fauna live here? Is there anything special about the world? For example, in Brandon Sanderson’s Mistborn, it is constantly raining ash.

While this is a crucial step, I wouldn’t recommend spending all your time in the world. It is easy to become distracted with your building and devote all your time to it. What good is a world without a story to match? Your goal here is to have an outline, the tip of an iceberg, with the inklings of the shadow that lies beneath.


Once I had the framework of my setting, I next chose the timeframe where my story takes place. By this point, I have a general idea of the story I want to tell and what kind of people or nations are involved. How did the land get to this point? What wars were fought? What shaped the political climate? Were there any massive natural disasters of note?

Not all of these events have to directly tie in with your story, but rather help shape the tapestry on which its woven. Your readers will wonder how kingdoms came to be or where the family of your hero came from, and its good to have a general idea on how to answer these questions.


This step is conditional. First, I ask myself if my world has magic, and what kind of magic system it is. Not all magic systems have well-defined, important rules. (see The Lord of the Rings.) But others have very complex systems that have huge effects on the culture and lifestyle of your world. (Again, like Mistborn.)

If you decide that your magic has rules and methods that need to be explained and written out, this is the place to work all of that out. By the time this is done, you should have a well-shaped world on your hands. We are missing only a few more ingredients.


This is usually my second-to-last step. Now that I know what my world looks like, what kind of rules govern it, and its history, I now began to write the different cultures and peoples that will populate my world. What kind of kingdoms exist? How many species? Are they at peace with each other? What kind of people or religion does my hero come from?

There are many different types of cultures that authors use to create their worlds. Some borrow from our world (Harry Potter, by J.K. Rowling), while others create their own (The Way of Kings, by Brandon Sanderson). Some have many different creatures, (The Lord of the Rings) others do not (A Game of Thrones, by George R. R. Martin).


Finally, when my world is complete, I begin to fully devote myself to plot. The first thing I do, if I haven’t already, is create a general, short summary of the plot. Using this, I then craft my outline point-by-point to make a map of the story for myself. I’ll use is that as not only my template for the book as I’m writing it, but the characters as well.

When the outline is finished, I conclude my world-building process by starting work on characters, which I divide into two groups; major and minor characters. The major characters include my antagonist, protagonist and supporting characters. These I’ll give extensive backstories – if applicable – as well as list many of their personality and preference attributes. When this is done, I’ll create my minor characters. These are the people who stand on the sidelines and take up small roles. I refrain from going too much into their backstories and personalities beyond what’s necessary to make them feel real. Remember; the more time you devote to developing your major characters in your book, the better.

As a writer and a world-builder, I’m still learning, developing and evolving my tactics to write the best that I can. I’m proud of my transition from scrambled, messy notes crammed in folders to pristine, easy-to-access categories. I’ve found that this helps both my concentration and my creativity to stay organized and follow the method I outlined above.

There are countless different methods that authors use to world-build. Some skip the process entirely! What about you? What strategies or methods do you follow in your world-building? Let me know in the comments below!

About Storm of Fury

For as long as Kaven can remember, Lantrelia has been at war. Yet its foe is not flesh and blood, but the eternal rage of the god Na’lek. Incarnate in a mighty storm called the Fury, Na’lek’s rage has butchered mankind by sending forth armies of supernatural monsters. Soon, the Fury’s attacks will sweep humanity away.

Determined to become a war hero like his father, Kaven sets out on a treacherous quest to stop Na’lek. With only three companions to aid him, he plans to enter the heart of the Fury and face the god himself to plead for mankind’s deliverance. Yet nothing can prepare Kaven for the truth he will encounter, for far greater forces are at work, and his quest, if successful, will come at great cost.

Will he put an end to Na’lek’s storm of Fury and prove his worth to his father? Or is his duty to his fellow man more important, even if it means he is a failure as a son?