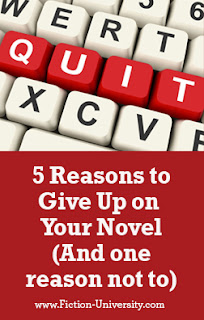 When it is time to call it quits with your manuscript?

Not every novel is going to work, no matter how much we might love the idea. Some ideas don't have enough conflict to maintain 400+ pages of story, others sound great until we get in there and start writing them, and some just need more skill or focus than we're able to give them at that time.

At some point in your writing life, you'll have a moment when you wonder if it's time to move on from a great idea to something else. You’ll doubt the novel is any good, and writing it probably isn’t any fun anymore. You might even be stuck, struggling with every word and unsure what to do with the mess you’ve created.

I’ve written seriously for twenty-five years, and I've had three manuscripts that made me want to throw in the towel—one I went back to and finished, one I'm still considering how I can make it work, and one I know I’m never going back to.

Let’s look at ways to tell when you ought to give up on a manuscript:


Like all jobs, writing has its ups and downs, but it ought to be enjoyable most of the time. If you’re dreading going to the keyboard every day, that’s a pretty good indication something is wrong with this manuscript.

Should you give up? Probably. At the very least, set it aside for a while until you have an urge to work on it again. It’s possible you’re just burned out on that story and need a break, or there’s something else going on that’s keeping you from writing this novel.

(Here’s more on never giving up)

2. No matter what you do, you can’t make it work like you want to.


Sometimes you have a fantastic idea but it just doesn’t turn out like you want it to. You have a vision of what you want, but what’s in your head is not making it to the page. It might not be a bad book, but it’s lacking and you’re not sure why, and any feedback you get doesn’t help. You know what’s wrong, you just can’t fix it.

Should you give up? For now, yes. There’s a good chance the manuscript requires skills you haven’t developed or need to further develop. If you can see the weak area, spend some time studying that skill, or practicing it on a throwaway manuscript or through writing prompts. Reading novels that use that skill particularly well can also help, as you’ll have a better sense of what to aim for.

(Here’s more on why some books kick our butts)


The thought of spending another minute on the manuscript makes you ill. You don’t like the story, the characters, the setting, and what was once exciting is boring and flat. You hate everything you’ve written and being in the same room with it makes you doubt your skills as a writer. It’s not uncommon for writers to hate what they’re working on during the writing process, so worry only if that hate goes beyond the normal “I’m so sick of this book” moments.

Should you give up? Yes. There’s no need to spend time with a manuscript you can’t stand. Move on and don’t let it bother you again.

(Here are five reasons your first draft  hates you)

4.You know deep down it’s not original enough to sell.


This one’s a hard, because you may really like the story and book, but you know it’s not gong to go anywhere. It’s a premise you’ve read or seen in a lot of other books, TV shows, or movies, and it brings nothing new to the idea.

Should you give up? Probably. While a “well-loved idea” can sell in the right circumstances (later book of an established author, for example), odds are it won’t stand out enough to be successful. But if you love the idea and you’re willing to give it a shot despite the odds, go for it.

5.You know deep down it’s not good enough to sell.


Sometimes you write a book and you know it has promise, but it’s just not breakout material. It’s not a bad book, but there’s nothing in it to spark excitement or really hook a reader (or agent). If you’ve been submitting it, you might be getting a lot of “I just didn’t connect with the [story-characters-setting-idea]. Try me with your next one.”] type rejections.

Should you give up? Probably, but there’s hope. If the book just isn’t a standout book, then the odds are against you, but if your skills just need a little more development, then you might be able to salvage this later. The hardest things about this manuscript, is being objective enough to see it as it truly is.

(Here’s more on taking your novel to the next level)

6. You’re not really sure what the story is about.


This happens with exciting first drafts that keep stalling, or keep growing. Either you don;t know what to do next or where it’s going, or the direction keeps changing and you keep writing off on tangents until the book is a mess.

Should you give up? No. Odds are you have a good idea, but you haven’t yet found what the story is about, so you’re floundering. Once you figure out the best way to write this idea, the book will be easier to write and start coming together. However, it’s possible you might need to set it aside while you figure it all out.

With my three “abandoned” novels—one I let sit for eight years until I’d developed more as a character writer (I’ve always been stronger with plot). I pulled it out again in December and just finished rewriting it—and I’m thrilled with the results. The second will likely languish forever, even though I like the idea and would love to do something with it one day. I know it’s not original enough or good enough, and there are so many other ideas I’d rather do first (but I still think about it from time to time). The third I know is a waste of time and won’t ever be anything anyone wants to read.

Some manuscripts aren’t ready to be written, while others never wanted to be written in the first place. The trick is knowing which is which before you drive yourself crazy trying to make them work.

Have you ever wanted to give up on a manuscript? What happened?