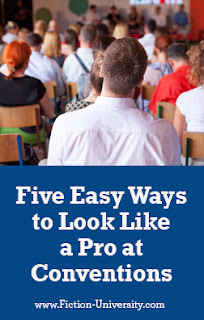 Image is everything, right? Well, let’s be real. If your content is crap, image isn’t going to save you in the long run, but when you’re in a crowded exhibit hall with a hundred other vendors, and you need to stand out, what are you gonna do, wear a Hawaiian shirt and dye your hair purple?

Please don’t. That’s my shtick, and this hair color was expensive. I don’t want to have to go back to my natural brown just because every other nerd out there has purple hair. But you do have to look good. You have to have a solid presentation, and it needs to not only look as good as the people around you, but it usually has to look better. Because if you’re just keeping up, then you’re not really keeping up. So what can you do to look better than your neighbor in Artists Alley or the vendor room at a con?

Caveat – most of these tips are designed with a comic con, or a big vendor hall-style show in mind. If you’re doing an in-store book signing, or a small craft fair, then these things might not be too useful for you.

1. Stand up to stand out


No, not you. Not necessarily. Personally, I usually sit behind my table most of the time. This is a calculated risk, and you need to understand how you are perceived to make your decision. I’m a big guy. I’m over six feet tall, over three hundred pounds, with tattoos, a goatee, and resting murder face. I should sit. I look less like I’m going to come across the table and kill someone that way. If you look nicer than I do, then by all means stand. But either stand or sit. Don’t sit behind your table, then jump up like your butt is spring-loaded when someone walks up. That’s a little creepy, and it makes you look either (A) desperate for a sale, or (B) like you’re part Tigger. And although tiggers are wonderful things, we don’t want to buy books from him.

But in this case, I’m talking about having a banner behind your table (always behind! NEVER in front or to the side – there are almost no situations where this doesn’t screw over your neighbor’s sightlines, and they will hate you for it. It also may be against the rules of the event). You can get a nice pull-up banner that is easy to set up and has your book cover(s) on it for around a hundred bucks online. Watch for sales. I prefer the ones that retract into themselves as opposed to the cheaper ones that have multiple parts, because I have a lot to do when setting up my booth and fighting with a banner is very low on my priority list. So I want the easiest setup possible.

But you do need a banner. Everyone else around you will have a banner, and you need one, too. You need to look like you have your crap together at least as much as the person two tables over who has books in your genre.


I said in my earlier Long Con post that flat stock is the devil. It’s still true. But once you get more titles than a few folding wire book stands can handle, you’re going to need a rack. Or two. Or a bookshelf. Or two. I recently shifted over to a mix of nice wooden folding bookshelves and wire racks, after using racks for a long time. The racks will hold more books, but they don’t display them all that well, because the covers overlap. The bookshelves have a better look, but display fewer books. You pick your poison. In my case, I take a little bit of arsenic, and a pinch of cyanide. Be careful not to fill the entire table with racks and shelves. You do still need to be able to make eye contact with people.


The crappy white t-shirt bags that you get at the convenience store? They’re about twenty bucks per thousand. I guarantee you will be one of the few people in an Artist/Author Alley that has bags. What does that get you? Why do you care?

It’s an in. More than once have I seen someone walking by, their arms loaded down with books they bought from another table, and beckoned them over. They look at my table, they shake their head, giving me the “I’ve bought a ton of books already” regretful smile, and try to escape. But I’ve got the ultimate bait – a plastic bag at the ready, to make their life easier. Because I’m such a wonderful person, and I’ve given them a bag (remember, $20/1000 bags), they are stuck in front of my table while they put all their crap into said bag. Then they feel obligated to listen to my pitch. And when I’ve got them, I’ve got them. YMMV, but for me, if I get them to the table, and get to talk to them, I usually get a sale. I do this 2-3 times per day at a con, and usually get a sale 2/3 of the time.


Pyramid your books and vary the heights of your display. Go to your local bookstore and look at how they display books. Then do that. Make your piles different heights. It makes your table look more interesting. Sometimes people will see a book that is on a dwindling stack and think that it must be selling well, so they want what everyone else has. Other times they’ll see a book with a big stack under it and think that must be the new hotness, so they want that. But if you vary your stack sizes, you can have something to draw everyone’s eye, no matter what.

5. Look at People and Talk to Them


This is my biggest piece of advice. Sometimes writers are the opposite of the Tiggerbutt, that person who bounces up whenever someone comes within ten feet of their table. Sometimes they’re an Eeyore-eye, someone who won’t look up at a potential reader, and if they do, they look either terrified to speak to them, or they look so depressed to be there that you wonder if you’ve encountered the reincarnation of Sylvia Plath.

Sylvia Plath was a lovely writer, but not a very good bookseller. If you’re going to do cons (and for the record, you don’t have to. I do, and I enjoy them, but if they aren’t your thing, stay home and write more books.) you must cast out any aspirations of being J.D. Salinger, or Emily Dickinson, or any other reclusive genius. Those people are dead, and so is the market they worked in.

So talk to people. Smile at people. Engage them. DO NOT ask them one-word answer questions.

Next Victim – “Who are some of your favorite authors?”

Let me be perfectly blunt here, and this is advice I gave to people when I was a business to business sales manager for nearly two decades, and it transfers to any other sales business. People buy shit from people they like. So if you can be likable for the ten minutes they have to deal with you, then you have a better chance of getting the sale.

Yes, it is exhausting. Yes, it makes a convention a long day. Yes, I know the lines at concessions were stupid and you waited forty-five minutes for an eight-dollar brat and a three-dollar soda.

No, I don’t care. This is your job, and you signed on for it. If you don’t want to put that brat down and talk to the person at your table, then go home. Either suck it up, let your lunch get cold, and do the work, or don’t take up a spot that someone who actually wants to be there could be using. Like I said, you can have a perfectly viable career without ever doing a convention. But if you’re going to do it, don’t half-ass it.

So talk to people. Be funny. Be pleasant. Be cute if you can manage it. I’m adorable. I look like the love child of Barney and Sons of Anarchy. So I work it. When you get home at the end of the show, you should be exhausted. Because if you’re doing it right, you’re expending a lot of energy engaging with people, showing them how awesome you are, and by extension, how awesome your books are. Because if you come away from a convention appearance with a bunch of paperbacks sold, that’s a good trip.

If you come away from that trip with two new lifelong fans, that’s priceless. Now go out there, show the world how amazing you are, and sell all the things! 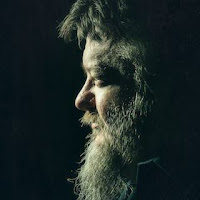 John G. Hartness is a teller of tales, a righter of wrong, defender of ladies’ virtues, and some people call him Maurice, for he speaks of the pompatus of love. He is also the award-winning author of the urban fantasy series The Black Knight Chronicles, the Bubba the Monster Hunter comedic horror series, the Quincy Harker, Demon Hunter dark fantasy series, and many other projects. He is also a cast member of the role-playing podcast Authors & Dragons, where a group of comedy, fantasy, and horror writers play Dungeons & Dragons. Very poorly.

In 2016, John teamed up with a pair of other publishing industry ne’er-do-wells and founded Falstaff Books, a small press dedicated to publishing the best of genre fiction’s “misfit toys.”

In his copious free time John enjoys long walks on the beach, rescuing kittens from trees and playing Magic:the Gathering.

About A Hard Day's Knight: Book One of The Black Knight Chronicles

The police are stumped.

Halloween is coming, with an ancient evil on the horizon.

The vampires are the good guys.

This is not your ordinary fall weekend in Charlotte, NC. Vampire private detectives Jimmy Black and Greg Knightwood have been hired to keep a young client from being cursed for all eternity, but end up in a bigger mess than they ever imagined.

Suddenly trapped in the middle of a serial kidnapping case, Jimmy and Greg uncover a plot to bring forth an ancient evil into the world, and enlist the help of a police detective, a priest, a witch, a fallen angel and strip club proprietor to save the world. This unlikely band of heroes battles zombies, witches, neuroses and sunburn while cracking jokes and looking for the perfect bag of O-negative.