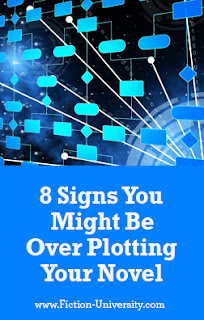 Plotting a novel can be a strange thing sometimes. We might have one idea we develop without trouble, or we might struggle with every goal and scene. And then there are the novels where the plot ideas hit us so fast we barely have time to write them all down.

But sometimes, what looks like a great idea is just an extra idea, and before we know it, our novels are so over plotted we don’t even know what it’s about anymore. Trouble is, we don’t always recognize an over-plotted novel when we write one.

They can be sneaky, making every plotline seem necessary, because they’re usually connected to characters and ideas we don’t want to cut. They’re shiny, often fun, and once they’re in the story, they fight stay there.

(Here’s more on over-plotting your novel)

Here are eight red flags that you might have an over-plotted novel:

You Have Way Too Many Main Characters


While “way too many” can be subjective, the higher this number, the more likely it is that there’s too much going on in the novel. If you have more than five or six “main characters,” and you’re not writing an multi-book epic, there’s a good chance some of those characters aren’t as “main” as you think. You might have important secondary characters, but they’re there to support the mains, not compete with them for page space.

A true main character is one who has a conflict-centric problem that’s driving the core conflict of the plot. Think “protagonist” and how that character is at the center of the story. How many of those do you have?

(Here’s more on deciding if you have too many characters)

Every Notable Character Has Their Own Plotline or Subplot


A lot of characters isn’t necessarily a bad thing, but if every one of those main characters has their own storyline, odds are it’s too much for one book. This goes double if secondary characters have their own plots and subplots. With so much going on, there's not enough time for readers to care about any one story or character.

(Here’s more on cutting characters from your novel)

You Can’t Explain the Plot in Two Sentences or Less


If it takes several paragraphs to cover the plot of the novel, be concerned. Pay particular attention if you notice describing your book requires multiple characters and multiple plotlines, and you only see a loose connection between all those stories. Over-plotted novels tend to read like multiple books in one.

This One Book “Sets Up a Multi-Book Series”


A common red flag for “too much” is the rationale that “it’s just the first book in the series.” You know you’re going to explore all these characters and plots over the next nine books, so it doesn’t matter if you start seven major plotlines in book one, right? Except, yes, it does, because there’s not enough page time for any of those stories to take root and hook readers. Look at the math—even a large novel of 120,000 words has only 480 pages. Split that between seven plots and you only have 68 pages per character to tell their story. That’s barely over 17,000 words each.

(Here’s more on the difference between setup and setup)

More Than One Conflict Could Be its Own Book


Often, an over-plotted novel gets that way because ideas keep coming to you. They’re good ideas, too, and you want to use them, and you start working hard to fit all those pieces together. But they don’t really fit, so you have to add other subplots or character arcs to make it work, and those need supporting characters and arcs, and before long it’s a huge mess.

If an idea would make a good book all on its own, save it for its own book. As my agent once told me, “Go deeper, not wider.” Explore the conflict you have, don’t add extra just to make the book “bigger.”

(Here’s more on building your internal and external core conflicts)

The Same Conflict is Explored or Seen Through Multiple Characters


This is a common problem with premise novels, since the point is to explore the idea. Sure, there’s only one problem—for example, stopping an evil wizard from destroying the world—but seventeen characters are trying to do it, and the novel is showing all seventeen points of view while they do it. Nothing new is brought to the story, because everyone is basically doing the exact same thing, just with slightly different details.

Your Story Won’t Fit in Any Story Structure Template


Over-plotted novels often have trouble with structures, because they have too many turning points—one set for every plot in the novel. You’ll likely have to choose which beat to use in the template based solely on where it falls in the novel page-wise, not because the turning point moves the story at that point in time. Or you might have multiple turning points occurring at once, such as an “inciting event chapter” with four scenes that all show a different character being pulled onto a different plot path.

While there are novels that don’t follow the classic templates, story structure is a tried-and-true way of building a novel. If your plot doesn’t come close to fitting any template, or you hit all the right beats but with different plotlines for each beat, odds are there’s a problem.


Over-plotted novels frequently have extra scenes that either repeat an idea already stated, or add “exciting” scenes that don’t actually advance the story or affect any change at all. The easiest way to tell if a novel is over plotted, is to take the scenes one at a time and ask: If I cut this scene, does anything change? If losing it doesn’t affect the plot or the character arc, there’s a good chance it’s not needed.

An over-plotted novel is not a lost cause. Most are fixed by simply cutting out what isn’t needed, and streamlining the parts of the story that advance the core conflict and supporting conflicts. It’s not always easy, since you’ll likely have to make hard choices about what stays and what goes, but you’ll wind up with a tighter and stronger novel by the end of it. And you might even end up with multiple books if those unnecessary plots can be their own novels.

Have you ever written an over-plotted novel? Were you able to fix it?


Find out more about plot and story structure in my book, Fixing Your Plot & Story Structure Problems.