How Over-Explaining Will Kill Your Novel 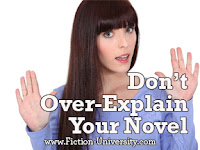 Writers have trust issues sometimes. We worry whether or not our readers will get what we're trying to do. Will they spot that oh-so-subtle hint in chapter three? Will they get the subtext between the romantic leads in scene five? Is the protagonist’s backstory clear or should we throw in a flashback that explains it?

We sometimes worry so much that readers might miss something, we end up shoving the story right down their throats.

For one thing, it frequently leads to bad writing, because we're explaining what happens, we’re not dramatizing a scene as it unfolds. For another, it robs readers of the chance to discover the story and connect to it on their own level. They’re not given the opportunity to make their own choices and decisions about the characters and story and what it means to them.

Have you ever seen someone try to explain why a joke was funny? Same concept.

Readers are smart folks who love books. They've been around the literary block once or twice, and they pick up on the subtle tricks of our trade. They get the subtext, they notice the clues, and they understand the layers and complexities of our characters.

Explaining a book is not the same as telling a story.

Explaining Leads to Infodumping, Which Keeps Readers at a Distance


Any time we explain, we’re stopping the story make sure readers understand something about the scene or characters. The more we explain, the more outside the story we tend to get, and the more likely it is that those explanations turn into infodumps and told prose.


The supplies Karl promised them weren’t there. Bob got so angry about the lie that he swung his arm so he could punch Karl in the face. The storage facility Karl had told them about was supposed to be filled with vital, life saving supplies like food, bandages, gasoline, and other essential items they’d need to survive the zombie-filled world they we’re now living in. If they didn’t have the supplies, they were going to have to risk their lives by going into the abandoned houses and shops along the highway in order to find food and medicine. Houses and shops that were filled with hungry zombies that would try to eat them.

Bob shouted at Karl, “How could you lie to us? We need those food and medical supplies to survive!”

Karl tried to get out of it by lying some more, so Bob threatened to shoot him. This terrified Karl so much he gave up and said he’d lied because he knew if he hadn’t, Bob would never have taken him with him and we have died on the road. Bob was still angry, but he decided not to shoot Karl.

Doesn’t this read more like a summary of a scene than part of an actual scene? Do you feel Bob’s anger? Get a sense of how bad this really is for him and his friends? The repeated information is also annoying—readers are going to know what “vital life saving supplies” are, and they don’t need to be told that three different ways. It’s also explaining what’s going to happen next, which makes the scene feel stale, because we know exactly what’s going to happen next.

Compare that with a scene that shows the situation and leaves enough for the reader to anticipate and wonder about:


The storage unit was empty.

Bob turned to Karl, standing back by the road away from the others. “You lied to us?”

Sure they were. “Well, they’re not here now, Karl. The door wasn’t even locked!” This was a nightmare. What was left in the truck? Two, maybe three days of food if they rationed?

Karl ran a hand over his mouth and shrugged. “Maybe someone beat us to it?”

Not likely. No one had been here in a long time, and his gut told him there’d never been any supplies here. He drew his pistol and cocked it. “Let’s try this again.”

This is just a snippet of what’s covered in the explained sample, but already it’s more interesting and there’s a better sense of a story unfolding. We’re not told why the characters are doing what they’re doing, we see them do it. We aren’t told Karl’s motives, we’ll see them in a few lines after Bob scares him into talking…or will he? Maybe Karl talks himself out of this and never reveals his cowardice. Maybe Bob shoots him. The resolution to this conflict is uncertain, because we’re seeing it unfold.

Here are three reasons why over-explaining can hurt the story:

It Robs Us of the Ability to Create Tension and Suspense


When we explain that Karl lied because he didn’t want to be left behind, there’s no mystery left about why he lied, or what his real motives might be. He’s just some poor guy trying to survive, not a potential threat. It also sums up all the action in a situation in a few paragraphs, so the problem is over before readers get a chance to even worry about what it all means.

Tension and suspense happens over time. The story needs that time to make readers worry and anticipate about what’s to come. Telling readers everything up front leaves them nothing to worry about. The fun is in wondering what Karl might be up to, not in knowing why he lied the moment he’s caught doing it.

It Doesn’t Give Readers a Reason to Keep Reading


The first example sums up everything we need to know for probably several chapters. We know where the story is going—a lot of scenes of Bob and the gang sneaking through houses and shops looking for supplies and running into zombies. While this might create some entertaining scenes, it’s probably not a whole lot different from the scenes that got us here. It is a zombie apocalypse novel after all. And without any reason for the storage unit scene to be there (since it was resolved immediately), there's little reason to think it has any greater meaning in the book.

While the same scenes might happen in the second example, not knowing Karl’s motives for lying, or even knowing for sure that he did lie, can make those house-searching scenes more interesting. Can Karl be trusted? Is there someone else out there Bob and the gang needs to worry about? What might they find while looking for more supplies? Why did they really make this stop at the storage unit?

Instead of the lack of supplies being a small bump in the plot road, it becomes something more—maybe it’s there because Bob and the gang need to encounter something in those abandoned houses. This plot device is how the author gets Bob into places he’s smart enough not to go into. If so, then there must be something cool coming up. Readers can see there's more here than just an empty storage unit.

It Keeps Readers from Connecting to the Characters and Story


No one is going to care about Bob or Karl in the first example, because they’re not characters, they’re just names. There’s no sense of being in their heads or seeing their struggles to survive in this zombie world. The motives are stated, but so what? Scared guy in a zombie world, big deal. There's nothing that makes Karl anything more than a cliche.

Had I written out example two further, we’d have seen more from these characters. I’d have shown Karl terrified and begging for his life, lying some more to keep from getting shot. I’d have thought about his motives and how that would have affected his actions. I’d have added the clues that maybe he was lying, but also leave doubt that maybe he really did think the supplies were there. I'd have added layers to him so he was a person in a tough situation trying to do what he needed to survive.

Bob would have been further explored as well. We’d have seen him struggling over what to do about Karl. Leaving him behind would be a death sentence, and shooting him would be kinder. But that’s murder, and Bob is still a good guy at heart. He’s not going to throw aside another human being like that. But taking Karl with them is a bad idea, since he's given Bob lots of reasons not to trust him. Is he just a scared liar or in he something more sinister?

Showing the characters in action is how we allow readers to get to know them. It makes readers care about them, and helps them connect to them on an emotional level. Readers don’t have the advantage of being inside the author’s head. They don’t know every aspect of the characters and what everything means, and why a small gesture is important. And you know what? They don’t want to know. They want to watch the character, get to know them, and figure all that out for themselves.

The urge to explain can be hard to overcome, but next time you feel that readers just won't get it unless you spell it out for them—resist. Trust that they will understand what you’re saying, that you have done enough, and that the clues aren't as obscure as you think they are. Because odds are, they will, you have, and they aren't. Believe in your words and the readers of those words.

Because figuring out the story is a lot more fun than that story explained.

Have you ever struggled with the urge to explain? Have you read books that didn’t hold back and explained way too much?

Find out more about show, don't tell with my book, Understanding Show, Don't Tell (And Really Getting It).