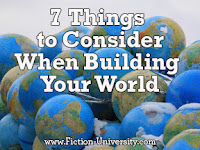 Half the fun of writing fantasy and science fiction is creating the world. It’s a way to stretch your creativity and design fascinating cultures and worlds that will hopefully engage readers and make them want to spend a lot of time in those worlds.

There’s a lot of elements to consider when designing a world, so here are some things to think about when creating yours:

1. How do people make a living?


At every level of society, there will be people who need to do things to keep that society going. In our world, we have day laborers and CEOs, part-timers and those who work 80-hour weeks, and a created world will have the same diversity. Not everyone will have the same job, and the jobs and means of support will vary based on social and economic classes.


Some people will be at the top of the social structure and hold all the wealth and power, others will be struggling to survive. Of course, “wealth” can mean anything and doesn’t have to be just money. A society might be based on another form of currency or item of value, and those with it rule the world.


People naturally group up by believes and/or needs, and there will be various groups among the population. Picture this more like cliques in high school than political parties. The groups are for support and have some power within their smaller circles, but don’t necessarily “rule” on a large scale.

4. What do people believe?


People believe in morals, ethics, and proper behavior (whatever “proper” means in your society), even if there’s no set religion. They have opinions and ideas about all aspects of their lives. These beliefs are typically based on their upbringing, education, and value system. No society is all the same. There will be people who have conflicting beliefs and views.

5. Where are the contradictions?


As a society evolves, weird things happen—so no society makes perfect sense. Rules and behaviors are established when they seemed like a good idea, and then later become obsolete. Contradictions will appears, as well as variations in how people think and act. For example, there are actual laws in the US that make it illegal to eat chicken with your hands.

6. How did the culture get this way?


People used to wander and go where the food was. Then we learned how to farm and settled down. They we discovered grouping together provided comfort and security, and cities were born. This same level of growth occurs across all aspects of society, so consider how yours came to be.

These are just some of the questions you can ask while developing your worlds, but use them as a jumping off point to guide your brainstorming sessions. Think about the various aspects of your world and how the people in it would interact.


In our efforts to create the “perfect” world for our stories, we sometimes force what we want into worlds that couldn’t possibly function. Make sure you’re not making these two common world building mistakes:

Think logically about how your technology evolved and what levels realistically work together with what’s available in that world. For example, you can’t have glass windows on a world without access to sand. Certain technological advancements require infrastructure and materials or they just won’t work. And remember, “technology” isn’t always computers and lights—it’s also the wheel.

Some worlds look great on the surface, but once you start looking at the individual pieces, it all falls apart. This happens most often when the author has a premise or idea they want to use, but don’t think beyond “this is how it works.” Worlds such as:

While careful thought could make any of these general premises work, worlds that exist because the “author wants it that way” rarely do. If something must be a certain way in your story, spend a little time to give it a plausible reason and a foundation for it.

There are novels where the whole purpose of the book is to explore a topic using a fantasy or science fiction premise that requires readers to suspend disbelief. The Hunger Games is a good example here—a lot of it makes no sense, yet it’s a study of how violence as entertainment affects our society. The world was created to make a point, illustrate a particular idea, and tell a great story. If your world was created for social commentary, readers are more likely to accept that world.

Creating a world is a lot of fun, but also a lot of work. Take the time you need to create the best world for your story.

Do you enjoy world building? What do you like to do first?