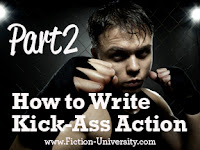 Believe it or not, it's easy to write gripping action scenes—if you know how. In Part 1 of this article, I showed you how to break down complicated action scenes into their component parts: location, characters, goals, and actions. Now I'll show you the real secret to wrapping up any action scene with an unforgettable bang.

The Advantage, the Switcheroo, and the Win


This is so cool.

When I figured out what really makes an action scene tick, everything changed for me. Suddenly, I knew how to write really good action, and I've sold every book I've written since.

What makes any action scene truly work is the ending. And as we all know, endings are not the easiest thing in the world to write. But I'm about to give you the secret decoder ring. Ready? Here we go.

The ending of any action scene has three distinct beats: the Advantage, the Switcheroo, and the Win.

You won’t find these high-falutin’ literary terms used anywhere else, because I just made them up. But they work.

The Advantage is the moment where one side appears to be in the perfect position to win the conflict. It seems like the scene is all sewn up, and the other side has already lost.

Then there’s the Switcheroo. The losing side pulls off a clever move that no one saw coming, and it immediately turns the tables. Use something from one of your brainstorming lists (such as the air compressor in Part 1 of this article) to create a Switcheroo.

That leads directly to the Win. (Or you could call it “The Lose” depending on your point of view.) The side that pulled the Switcheroo immediately comes out on top, and the scene wraps up.

Note that this means whoever has the Advantage will ultimately lose the struggle. If you know how you want the scene to end, you can reverse-engineer the Advantage and the Switcheroo.

Here's how I did it in my funny urban fantasy novel, A Kiss Before Doomsday:

A stream of wiry webs shot from the creature’s palms, wrapping tightly around Dru’s left leg. Instantly, she was stuck, as if her shoe were glued to the floor. She flailed about, but she couldn’t lift her foot even an inch. Dru could only stare, speechless with horror, as the thing lurched toward her with jerky, lopsided steps.

She needed to find a way to cover the entire creature in powder. Fast. Her gaze roamed the garage shelves and fell on the bloated red cylinder of the air compressor sitting on the floor nearby. Pressurized air. Of course.

As the creature loomed over her, Dru jammed the air nozzle into the plastic bag of powder and squeezed the trigger. A whoosh of air filled the sack, inflating it to the size of a beach ball. Dru hefted it up, blocking the creature’s next attack.

The thing’s claws slashed the bag. With an ear-splitting pop, it exploded. A blast of cement-colored dust rocked the garage.

This is followed by a lengthy, humorous description of the gray powder covering every inch of the garage, including the characters. The creature, arms outstretched, promptly keels over onto its back, immobilized. The heroines win!

By the way, the next time you read an action scene in a book or see it in a show, look for the Advantage, the Switcheroo, and the Win. You'll start spotting them everywhere.

For the final step, you could use index cards, or literally cut up your notebook pages with scissors and rearrange the pieces. I’ve done both.

I'm also a big fan of a program called Scapple, from the makers of Scrivener. (I explain why here).

If you've followed my directions from the first part of this article, then you've brainstormed everything you need to write a kick-ass action scene: location, characters and goals, and actions. Now you have the Advantage, the Switcheroo, and the Win.

Sort through your notes and decide what you want to keep and what you want to toss. Take the keepers and put them in roughly chronological order, from the beginning of the scene to the end. You might start by describing the location, introducing the characters, and going through the other steps in order. Or you could mix it up. The choice is up to you.

Personally, when I sit down to write an action scene, I often start with the Switcheroo and work backwards. I'll think of a cool object I can use in a new way (for example, that air compressor), and that helps me figure out the whole ending of the scene. Then I plant that object in the location, and go through the rest of the steps in order.

Once you put it all together, you’ll have a detailed outline you can use to actually write the scene. And it will make writing the action seem so easy, it will feel almost like you're cheating.

One final note: once you've gotten good with this method, you can use it to write almost any kind of conflict, not just car chases and foot fights. Even a heated argument, where words are used as weapons, can have an Advantage, a Switcheroo, and a Win. Try it and see what you think.

What do feel is the toughest part about writing an action scene? Leave me a comment below or contact me at www.laurencemacnaughton.com. 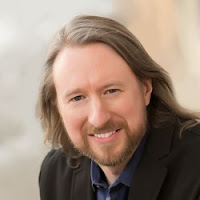 Laurence MacNaughton writes funny books about magic crystals, possessed muscle cars, and the end of the world. His books include It Happened One Doomsday, A Kiss Before Doomsday, and No Sleep Till Doomsday (July 2018). Find out how you can get a free ebook at www.laurencemacnaughton.com.


About A Kiss Before Doomsday (Dru Jasper, Book 2)