Plotting a Novel: The Big Picture vs. Single Scenes 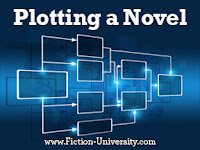 Plotting a novel (or a short story) seems like it ought to be an easy thing to do, because you’re just describing what happens in the book. But “How do I plot a novel?” is also the number one question I get asked, so clearly, plotting is harder than it looks.

When I first started writing, I too struggled with plotting. I didn’t fully understand what it was, so I wound up explaining how my characters explored whatever cool idea I’d come up with. I had no actual plots, even though I’d thought I did. All my novels sounded like this (and yes, these are manuscripts I’ve written):

Are these bad ideas? I don’t think so. But notice the similarities here:

Now, if these one-sentence descriptions were the spark of the idea, and I plotted the novel using these sparks, then I would have gotten somewhere with them. But these describe the actual finished manuscript. And you can see there’s not a lot there that shows a plot.

Knowing what I know now about plotting, I can see that I wrote a slew of premise novels that focused on the ideas, not a character with a problem that had to be resolved or else. I had stories, but no plots.

(Here’s more on going from premise to plot)

These days, I plot in two stages: big picture and single scene. The big picture is the overall framework of the novel, and the single scenes are, well, the individual scenes that make up the novel. Let’s look at each a little closer.


The details will vary by the type of writer, but big picture plotting focuses on the major turning points and events of the novel. These are the events that you’d put in your query or synopsis. These are the moments where big things happen, such as:

No matter what structure you use and what you call them, there are defined moments in every story. Identify these moments, and you create a big picture plot for your novel.

This is why I’m such a huge fan of story structure, because it does half the work for you. You still have as much freedom as you’d like to fill in these moments, and you can adapt and tweak as you see fit for your own story, but the general outline is there.

(Here’s more on using story structure to your advantage)


I suspect when writers say they have trouble plotting, this is what they mean—which is why all the big picture plotting advice in the world isn’t helping them. Plotting those major turning points is different from plotting out an individual scene. Here’s the most important thing I can tell you about plotting scenes:

It’s about what the character physically does in response to something.

It’s that last part that gets tricky, because everything past the opening scene is a reaction to something in the story. Something happens, and the protagonist reacts to it and does something.

Every action your protagonist has is in reaction to something. It’s a choice based on whatever is going on at that moment, and whatever information and beliefs they have—even if it’s wrong.

A scene is specific. It has a point, and it has a place to go.

This is where a lot of writers trip up when plotting. Their scenes might have a point, but it’s about showing or revealing that point, not moving the plot. For example, the point of the scene is to:

None of these are inherently bad, but they also don’t give the plot any place to go.

And if we step back, what are these scenes a reaction to?

See how action and reaction work to take the plot from scene to scene? Scenes don’t exist by themselves, they build on each other to get from major turning point (those big picture plot points) to major turning point. So a plot with one of these scenes might look like:


The babysitter cancels at the last minute, forcing a woman to ask her mother for help so she can go to a critical job interview. The mother says no, they fight, elements of the bad relationship are slipped in, and the woman is forced to take the children with her on the interview, where they cause trouble and she doesn’t get the job.

The job interview is the goal. The canceled babysitter is the problem. Asking Mom for help is the conflict. The job itself is the stakes.

The scene allows you to show the bad relationship with Mom, but now there’s plot making that relevant to the overall story. Something happens, the protagonist reacts and makes a decision, she faces the results and consequences of that decision, she reacts again and makes a new decision, and so on and so on…

This hits the basics, but we’ll talk more about plotting scenes next week. I’ve done so much on the big picture, it’s time to get into the nitty gritty for a while.

What are your thoughts on plotting? Do you have any specific things you’d like me to discuss?

If you're looking to improve your craft, check out one of my books on writing: