JH: Graphic novels have been rising in popularity for years, and they've developed into a lot more than just "fancy comic books." There are graphic novel versions of the traditional superhero story to literary classics, making them accessible to every reader. If you've ever wondered about writing a graphic novel, Nate Evans visits the lecture hall today to share his experience.

Nate Evans is the New York Times bestselling author/illustrator of more than forty children’s books, including Ponyella with Laura Numeroff. His most recent picture book is Cookiesaurus Rex, co-authored with Amy Fellner Dominy. Tyrannosaurus Ralph is his first graphic novel for kids. Nate is also a middle school art teacher and loves to share his passion for books with his students. He lives in Phoenix, Arizona.

Take it away Nate...

One of the biggest things happening in the kid’s book market right now is the graphic novel. A graphic novel is essentially a novel told in comic book format with panels and dialogue balloons. Comics have always been popular, but the depth and range of graphic narrative has moved way beyond the typical BAM! POW! stuff. There are all kinds of diverse, exciting stories being told in this eye-catching, reader-friendly format.

Over the last two decades, I’ve written and illustrated over forty children’s books (three of which have appeared on the New York Times’ bestseller list), but I’d never written a novel. I’d been trying to gear up for it for years. I’d read all of the inspiring books (Stephen King’s On Writing, Anne Lamott’s Bird By Bird are among my favorites), and I’d made a list of ideas that felt like the beginnings of great middle-grade novels…but somehow I never seemed to really get going.

Then my wife was diagnosed with cancer. I quit illustration and started writing full-time so that I could be with her during all aspects of her treatment. Tyrannosaurus Ralph had originally begun as a first chapter book concept for young readers cooked up by my brother, Vince Evans, and me. But now, as I wrote in doctors’ waiting areas and hospital rooms, I decided to get serious about the project. I decided that it was time to attempt My Great American (middle-grade) Novel.

Over the next few years, I wrote several drafts of the manuscript. As the project progressed, I was still struggling to find my voice in this longer format. I kept sending different versions of the manuscript to my kind and patient agent, Caryn Wiseman, and while she loved the basic concept – a young boy’s brain is transplanted into the body of a T. rex so that he can fight as Earth’s champion in an intergalactic arena – we both knew the manuscript wasn’t right yet.

Meanwhile, in my never-ending quest to cram my brain full of advice on the writer’s craft, I’d begun listening to podcasts. One of my favorites is The Writers Panel hosted by Ben Blacker, which focuses on writing for movies and TV specifically. It dawned on me that writing a graphic novel was essentially like writing a screenplay. My stories usually unfold like movies in my head -- maybe I could write this new dinosaur concept as a graphic novel! Plus, Vince used to work at Marvel Comics. He’d be the perfect artist for this project.

I proposed this new direction to Caryn and she gave me an encouraging thumbs-up. Now I had a format that seemed perfectly matched to my concept. I did some research and discovered that there really isn’t a “correct” way to write a graphic novel script. I queried Google and found some excellent tutorials on how to set up a template in Word that mimicked a screenplay.

Here’s the first page of my manuscript in this new graphic novel format: 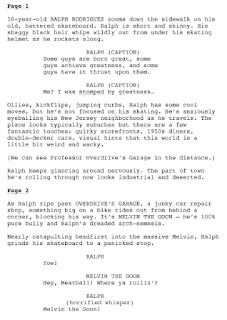 I was re-energized by this new format, and I found that as I moved forward, many of my previous writing problems fell away naturally. I stripped the story down to only what inspired me: the action-packed plot, the goofy humor, and the dialogue. The best parts of my descriptive prose became my scene and action descriptions. Then I reformatted all character dialogue into its new, almost-centered location on the page. As I worked, I found I needed to add a lot more dialogue to the story, but moving the plot forward with banter and jokes was an interesting challenge.

Movie scripts are typically 90-120 pages in length. I started with that as my goal, but then, after studying some of the graphic novels I was using for inspiration, I upped my page count to approximately 140 pages. (This was my graphic novel page count, not actual pages of the manuscript. The actual script clocked in at about 108 pages.)The way that I paced the story visually was, once I had it fully plotted out, I began to estimate how much action I could fit onto each page of the graphic novel. At the same time, I was also trying to create a mini-cliffhanger at the end of each double-page spread -- I was always striving for as much of that “what’s going to happen next” excitement as I could get. I tried not to over think these initial layouts, however, figuring that Vince would probably revise the visual pacing and action if we actually sold this manuscript. 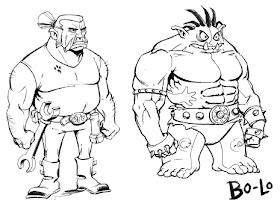 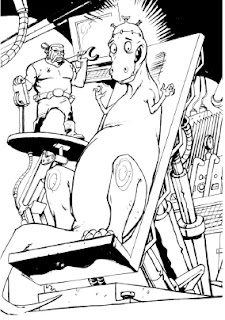 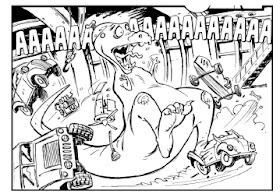 Now we had something special! My agent submitted the final manuscript and art samples, and it was a dream-come-true when an enthusiastic editor at Andrews McMeel Publishing acquired the project.

Have you ever considered writing a graphic novel?

Ralph is just trying to get home from school without getting picked on by the local bully.

He's not trying to run smack into that bully. He's also not trying to wake up hours later in the body of a Tyrannosaurus Rex. And he's DEFINITELY not trying to do battle in an alien arena in order to save Earth from the evil Clobberus Crunch.

Unfortunately for Ralph, this is exactly what happens.

Armed only with a new body (with very tiny arms) and his wits, Ralph is expected to not only defend himself and his planet in hand-to-hand combat with ferocious aliens, he must also navigate a new world filled with all sorts of creatures Ralph has never imagined, in which it can be difficult to tell friend from foe.

This zany, hilarious story will appeal to anyone who loves dinosaurs, aliens, and adventure.

Dinosaurs plus bullies plus aliens plus hijinks equal a wacky new graphic novel kids will love!