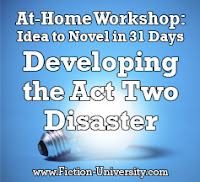 Welcome to Day Twenty-Six of Fiction University’s At-Home Workshop: Idea to Novel in 31 Days. For the rest of the month, we’ll focus on plot and the major turning points of a novel.

Today, we’re looking at the end of act two and when things fall apart.


This act two disaster is the moment when it all goes wrong for the protagonist. The big plan to save the day fails miserably and he’s worse off now than he’s been the entire novel. The stakes are raised yet again, and it all becomes too much to handle.

In cliché speak, it’s the darkness before the dawn.

Why the act two disaster is important: This is where the character arc kicks in. The fatal flaw of the protagonist causes things to turn out worse than expected, and now he has to overcome that flaw to succeed. It’s where characters frequently face their inner demons and emerge victorious, the moment when all is lost and they must dig deep down and examine who they really are.

All through the middle, the protagonist has been trying and failing, feeling the pressure, ignoring his flaw and the lessons the plot is trying to teach him. Just when things are the most dire, he acts in a way that causes catastrophic failure. (Adjust this to fit the scale or scope of your story. What’s catastrophic in a science fiction epic is usually different from catastrophic in a romance.)

This disaster triggers two classic storytelling moments—the all is lost moment and the dark night of the soul. These are critical turning points for both the protagonist’s character arc and the external plot, and it’s frequently where the two arcs merge into one.


Everything the protagonist has tried so far has failed. He fully believes the worst things about himself and sees no way to win or get out of his problem. He’s lost all hope and wants to abandon everything and slink away in failure and despair.


This moment occurs at the very bottom of the protagonist’s despair. It doesn’t have to be an actual night, just a moment (whatever length you choose) where the protagonist is forced to examine his life and his choices and accept how he got to this point. He then manages to dig deep down, gather himself up, and realize what he has to do after all. It isn’t truly hopeless, but he’ll have to sacrifice something. (This can be any number of things, from a literal sacrifice to abandoning a belief or self doubt.) He’s learned his lesson and he now knows what to do.

Here are things to consider when developing your act two disaster:

1. What is the thing that would make the protagonist want to give up?

3. How might the protagonist get to this point? What events need to happen before this occurs?

4. What is the protagonist’s flaw?

6. What realization might the protagonist have that pulls him out of the dark night of the soul?

EXERCISE: Describe what goes wrong or how the protagonist fails, and how this sets him up for the march to the novel’s climax.


Be as detailed or as vague as you’d like. Consider how this scene might lead to the climax of the novel.

If you’re not sure how much to write, aim for one to three paragraphs that describe how the protagonist’s flaw led him to this moment and what goes wrong, how this sends him to the all-is -lost moment—what he feels and how he reacts, what depths he sinks to during the dark night of the soul, and what realization comes to him that makes him pull himself up and devise a new plan. Writing more is also acceptable if you want to continue with how the plot would unfold to the next major turning point.

Tomorrow, we’ll look at the act three plan, which launches the novel’s ending.