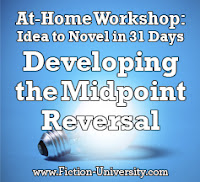 Welcome to Day Twenty-Five of Fiction University’s At-Home Workshop: Idea to Novel in 31 Days. For the rest of the month, we’ll focus on plot and the major turning points of a novel.

Today, we’re examining the middle of the novel.


The midpoint reversal occurs in the middle of the novel. Something unexpected happens and changes how the protagonist (and the reader) sees the story. The plan or worldview the protagonist had all along no longer works or is no longer viable, and things have to change. This choice and new plan is what sends the plot into the second half of the middle.

Why the midpoint reversal is important: It shakes up the plot and causes the protagonist’s world to be turned upside down—things he thought he knew won’t be true. He’ll start looking for help as this problem gets bigger and bigger, and the stakes get higher and higher. Dealing with this problem creates the goal for the second half of the middle and eventually transitions to the ending (act three).

Key Elements of the Midpoint Reversal

A good midpoint reversal is something that throws the entire plot sideways and leaves readers open-mouthed in shock, because they never saw this coming (or they worried it might happen and were desperate to find out if they were right). It changes the plot and suddenly the ending is unpredictable. Readers are flipping pages fast, amazed by the unexpected turn of events, and dying to see where this new predicament goes.

A good midpoint reversal will also raise the stakes, even if they were high to begin with. It often adds a level of personal consequence that wasn’t there before, or reveals a secret (or problem) that was hidden. Sometimes it requires a sacrifice, be it a personal belief or an ally. Sometimes it’s all of these things at the same time.

Once readers are shocked, there’s new momentum driving the plot toward the ending. The midpoint reversal makes the protagonist’s goal harder to accomplish, costs him more to win, and has serious consequences if he fails (sometimes even if he wins).

Here are some questions to help you discover your midpoint reversal:

1. What is the absolute worst thing that can happen to your protagonist at that moment?

2. How can you make that happen and force him to work overtime to get out of it?

3. Is there a way to make your protagonist’s inner goal clash with his outer goal in a disastrous way?

4. What’s the one thing that could happen that would make your protagonist give up?

5. If this happens, what would keep him trying anyway?

6. Are there any deep dark secrets that could be revealed and ruin everything?

7. How might the result not be the one the protagonist was worried about—it’s worse?

8. Can you mirror the climax in any way or foreshadow the ending or choice that is to be made later?

EXERCISE: Describe the midpoint reversal of your novel, and how it changes the life, goal, expectations, and/or beliefs of the protagonist.


Be as detailed or as vague as you’d like. Consider how this scene might lead to the next turning point of the novel.

If you’re not sure how much to write, aim for one to three paragraphs that describe how the protagonist reaches this moment, what happens, how it affects him, and where he has to go from here. Writing more is also acceptable if you want to continue with how the plot would unfold to the next major turning point.

Tomorrow, we’ll look at the end of act two and the act two disaster.