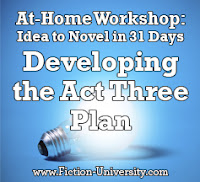 Welcome to Day Twenty-Seven of Fiction University’s At-Home Workshop: Idea to Novel in 31 Days. For the rest of the month, we’ll focus on plot and the major turning points of a novel.

Today, we’re kicking off the novel’s ending with the act three plan.


After digging deep down and finding the emotional strength to continue, the protagonist puts a new plan into action, using everything he’s learned over the course of the novel. Like the act two choice, this is a conscious decision by the protagonist that will pit him against the antagonist in the climax.

Why the act three plan is important: This sets the protagonist on the path to face the antagonist and resolve the core conflict of the novel. It’s when he uses his experiences in the book to achieve his goal.

The act three plan is the moment when everything falls into place for the protagonist. He finally knows who he is and what he’s supposed to do, and he sets off to accomplish that. There can still be plenty of uncertainty and even fear on the protagonist’s part, but most of that personal self doubt is typically gone by now. The remaining fear is for the antagonist and the ability to win, not the fear of not being good enough to even try.

The plan is usually ambitious, clever, and unexpected, even though it also feels inevitable. This is what the protagonist and the supporting characters were meant to do all along. The plan may or may not be revealed to readers at this point, and often the actual details are kept secret, even though the general idea is mentioned to help drive the plot forward. It’s up to you how much to reveal.

Here are some things to consider while developing your act three plan:

1. What weaknesses might the protagonist have discovered about the antagonist that could be exploited?

2. What was the protagonist afraid to do before, but now has the courage to try?

3. How have the protagonist’s old and new beliefs merged?

4. What insight has this new outlook given the protagonist?

5. What has to be done to reach the antagonist?

6. What skills might the protagonist use to defeat the antagonist?

EXERCISE: Describe what your protagonist plans to do to reach and defeat the antagonist.


Be as detailed or as vague as you’d like. Consider how this plan will lead to the climax of the novel.

If you’re not sure how much to write, aim for one to two paragraphs that describe how the protagonist’s dark night has given him new insights into what has to be done to win, how to go about reaching the antagonist, and what might be required to defeat her. Writing more is also acceptable if you want to continue with how the plot would unfold to the next major turning point.