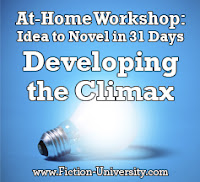 Welcome to Day Twenty-Eight of Fiction University’s At-Home Workshop: Idea to Novel in 31 Days. For the rest of the month, we’ll focus on plot and the major turning points of a novel.

Today, we’re focusing on the ending.


The climax is the final showdown with the antagonist. The protagonist faces whomever or whatever has been making his life miserable for four hundred or so pages, and because he’s learned XYZ over the course of the novel, he wins (or loses spectacularly if that’s the type of book you’re writing). Whatever happens, the core conflict problem is resolved.

Why the climax is important: This is how the novel ends and how the story questions are answered. This often determines how much readers like the book. Everything in the novel has been building toward this moment.

Some Things to Consider About the Climax


What constitutes a win for the protagonist? If you’re not sure, look at your beginning. What major thing happened that set your protagonist on his journey? What has he been trying to accomplish all along?

What constitutes a win for the reader? Expectations will be set up throughout the novel and readers are going to want to see those expectations satisfied. What promises did the story make? What problems were dangled? What risks were taken that hinted at greater consequences?

Does it satisfy the major questions posed in the novel? Not all the loose ends have to be tied up, but there are probably a few major things in the novel readers will want to know the answers to. Too many left answered can leave readers feeling unsatisfied.

Is this the ending most readers are hoping for? Readers are going to root for X to happen, because you’ve likely written the novel for just that event and have led them to expect a certain outcome. Part of a satisfying ending is getting the ending you hoped for all along, even though we’ve all read books where we wanted one ending, but the book ended another way.

Key Elements of the Climax

The climax often has one last increase in stakes, making this final battle matter on a bigger scale. Look at what the protagonist has at stake on a personal level and how that ties into the story from a thematic aspect, so the ending has more poignancy. It’s not uncommon for this rise in stakes to happen after a twist or surprise.

A surprise at the end isn’t mandatory, but endings we can see coming a mile away usually bore us. However, readers expect the protagonist to win in any book they pick up. There is only so much mystery we can squeeze out of “will he win or not?” The tension and wonder comes from how the protagonist wins and what it costs him. This is why personal stakes are so critical. But we also want the protagonist to act in a way that is unexpected, so the way he resolves his problem is a surprise.

Try looking at the moral beliefs of the protagonist and having him do something he’d never consider doing otherwise. But the trick is, he still has to be true to himself. He can’t just throw out all he believes in. He has to make that choice, hard as it is, for reasons that fit who he is now (the final piece of the character arc). Maybe it was a line he refused to cross before, or a risk he was never willing to take, or something that might even have been suggested earlier in the novel and rejected. But the stakes are higher now, and not doing it will result in something far worse than doing it. It’s a sacrifice he’s willing to make, even though it’s going to cost him a lot.

Here are some things to consider while developing your novel’s climax:

1. What inner conflict has the protagonist been struggling with all along?

2. How can the inner conflict butt heads with the outer problem in the climax?

3. How might the inner conflict influence what the protagonist needs to do to solve the final problem?

4. How might the theme be used to make the ending more powerful, and thus raise the stakes?

5. How might the risk be more personal for the protagonist?

6. What surprise might happen to throw either the protagonist or the antagonist off?

7. How does the act three plan compare to the climax? Does it work? Where does it fail?

EXERCISE: Describe how the climax unfolds.


Be as detailed or as vague as you’d like. Consider how the climax resolves the core conflict of the novel.

If you’re not sure how much to write, aim for one to three paragraphs that describe how the climax unfolds, where it takes place, what (if any) surprise occurs, and how the protagonist deals with that surprise to resolve the core conflict. Writing more is also acceptable if you want to continue with how the plot would unfold.

Tomorrow, we’ll look at wrapping up the novel.