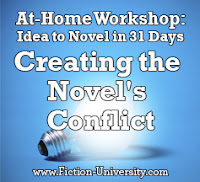 Welcome to Day Six of Fiction University’s At-Home Workshop: Idea to Novel in 31 Days. The first twelve days will focus on developing the story and getting all the pieces in place so we can more easily plot the entire novel.

Today, we’re looking at your novel’s conflict in preparation for developing the antagonist. This might seem a little backward, but if you’re sure what type of conflict you have, it’s a lot harder to know who the bad guy is.

This is a character against another character, people vs. people, even if those people are non-human. They’re still a character like any other. The person standing in the protagonist’s way is another person. A person is the antagonist.

If the conflict doesn’t involve one person against another, then it might be a Person vs. Society or Person vs. Nature novel. In these types of novels, the antagonist is something to overcome or survive. A blizzard must be endured, a law must be changed (or a person unfairly condemned by that law must be freed). Something is keeping the protagonist from winning, and that something plays the role of antagonist.

This is when the protagonist has a problem with something that is status quo in the world. It’s not any one person who is causing trouble, it’s how things are being done. Everyone is standing in the protagonist’s way, but not everyone is at fault. The antagonist is often represented by another character that shares or symbolizes the society and its problems.

Here are some things to consider when developing your conflict.

1. What type of conflict is your novel?

2. What type of conflict is preventing your protagonist from succeeding?

3. What type of conflict might produce the best antagonist for this story?

EXERCISE: Write down the conflict type you feel would work best for your novel. Explain why.


It’s okay if the details of that conflict are still unformed, but try to pinpoint the type of conflict if you can. Not only will this force you to consider the potential obstacles in your protagonist’s way, it will make it easier later to determine what your core conflicts are, and how the antagonist fits into that conflict.

If you’re not sure or think it could be a combination of conflicts, go ahead and write both down. You can pick a specific antagonist tomorrow. Sometimes it’s not always clear, or you decide to change it as the novel develops.

The conflict could change as you develop your novel, so don’t worry if you have a few possibilities at this stage. If there are multiple types of conflict, you might decide to use all of them for different characters or plot arcs. What matters most is to think about the conflict and the areas where your characters are going to hit obstacles. One common reason novels get rejected is due to a lack of conflict, so it’s important to build strong conflicts into your characters.

Those following along with the PYN book: Workshop Four goes into more extensive detail on developing your conflict and determining the type of conflict you have.

Tomorrow, we’ll look at ways to develop your antagonist.