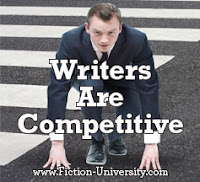 Part of the Indie Authors series

A chance comment by a friend on Facebook today got me thinking on the 2011 Woody Allen film, Midnight in Paris. If you’ve seen the movie, you’ll surely remember the wonderful scene in which Hemingway’s character tells the protagonist, a young writer transported back in time,that “writers are competitive.” (For those of you’ve not seen this gem, I’ve linked the scene here.)

My friend, who had just joined a writers-helping-writers group on Facebook, wrote, “It has been a while since I've read entry level stuff.”

As a longtime critiquer and editor, I found myself wincing in sympathy. And yet part of what his comment evoked was his surprised realization at how far he’s personally come as a writer.

Indies, who don’t work with publishers or agents, have no benchmarks or ways to calibrate their progress besides writer friends or critique groups.

And you know what? Yup, writers are competitive.

Don’t get me wrong: this doesn’t mean that other writers will drench you in bad vibes or sneer derisively while reading your work. But they will, at least subconsciously, be measuring themselves against you, their work against yours. It’s inevitable, and can be healthy. Reading a really good author’s work, or seeing how very tenacious and hardworking another writer is, can be a motivating, inspirational force. Reading entry level writers’ work not only confirms you’ve made progress, but also reminds me of you of what works and what doesn’t.

But the very fact that we’re calibrating on a vertical axis and trying to grasp our place in a hierarchical scale, that we’re wanting to be as good as or better than someone else, is competitiveness.

Of course, most of us aren’t that uncharitable (or honest). We’re more likely to cheer on our peers and our friends who do well. But if you’ve been in the game for a while, there’ll be times when you read work that’s deeply flawed, maybe even just plain awful, and yet enjoys huge success with the public.

What’s your reaction? Are you jealous of this terrible writer’s undeserved success? I wouldn’t blame you if you were. You’re disgusted, for sure, and you have every right to be. It’s wrong, it’s unfair! You know you can do, and have done, better than that.

When you’re in that place, there are two main things you can do: you can feel sorry for yourself, or you can grit your teeth, get over it, and get back to work. You’ve got this.

If you're going to play, play to win. 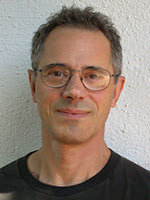 Dario Ciriello is a professional author and editor as well as the founder of Panverse Publishing.

His fiction includes Sutherland's Rules, a crime caper/thriller with a shimmer of the fantastic; Black Easter, a supernatural suspense novel which pits love against black magic and demonic possession on a remote, idyllic Greek island; and Free Verse and Other Stories, a collection of Dario's short science fiction work.

Dario’s 2011 nonfiction book, Aegean Dream, the bittersweet memoir of a year spent on the small Greek island of Skópelos (the real Mamma Mia! island), was an Amazon UK travel bestseller. Drown the Cat: The Rebel Author’s Guide to Writing Beyond the Rules (Panverse, July 4 2017) is his second nonfiction work.

In addition to writing, Dario, who lives in the Los Angeles Area, offers professional editing and copyediting services to indie authors.

About Drown The Cat: The Rebel Author's Guide to Writing Beyond the Rules

Drown the Cat is a complete guide for the fiction writer who wants to develop an individual voice and understand the reasons underlying the so-called rules of writing. Although a few rules really are necessary, the vast majority are either dogma or passing fads. Worse, so much advice like “show don’t tell” and “open with action” is often poorly explained and entirely misunderstood, causing writers no end of problems.

Drawing on fifteen years of writing, critiquing, editing and mentoring experience, Dario Ciriello explodes writing myths, shreds conventional wisdom, and dissects the often misleading advice and diktats shouted at writers by books and blogs, agents and publishers. Drown the Cat gives authors the necessary tools and insights to retake control of their story and make it unique.

Whether your interest lies in novels or screenwriting, Drown the Cat shows you how to tell your story in your voice and place it before your audience, eschewing formulas and cookie-cutter fiction to remain true to your own, exceptional vision while adhering to the few rules that actually matter. Because writing isn’t about prose wonks and industry insiders: it’s about the reader, and most of all it’s about telling a story. Your story.