Birth of a Book: The Development Stage: Developing Your Characters 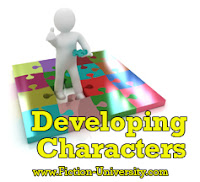 Over the last month, We've been going through the early stages of writing a novel. We started with the Idea Stage, turning a spark of inspiration into a solid and tested idea for a story. We explored the Inspirational Spark, then we discussed Brainstorming the Idea, followed by ways to Clarify the Idea, and wrapped it up with how to Test the idea. Last week we started Stage Two: Development, beginning with creating characters. We continue this week with ways to development those often rough characters.

Once you have your handful of characters and general roles figured out, it’s time to turn them into “real” people. This varies depending on the type of writer you are—for example, I mentioned last week that I do very little character development on the first draft, because I like to see how my characters act in the story. I figure out who they are by putting them into tough situations and seeing what they do about it. Other writers figure this all out in advance and know every detail about a character before the first scene is written. Both are valid ways to develop characters.

If you’re not sure where to start, or looking for ways to shake up your existing process, here’s what works for me:

Step One: What Do You Need to Know?

You are the only one who can tell you what you need to develop your characters, so don’t worry if it takes you some time to figure it out. I used to spend weeks filling out character personality sheets before I realized they didn’t hep me at all; all they did was make me want to cram all that useless detail into the novel. Try a variety of tools and processes to see which one resonates with you. Trust your instincts—if you feel like creating detailed characters is a waste of time, don’t do it. If you feel starting a book before you know the full history of your protagonist is a rewrite waiting to happen, don’t start until you’re ready.


I used the word “template” loosely here, because not everyone will use one, but we’ll probably all have a way to keep track of our information. My template is a tab on One Note with a few paragraphs and a bunch of bullet points with notes. Other writers use a detailed sheet with multiple questions. Bonnie Randall has a great set of character questions to ask that goes beyond the police-blotter descriptions.  (Bonnie has written about characters a lot, so it’s worth scanning through her articles for the character pieces)

When I was starting out, I used whatever tool or template seemed interesting. Eventually I learned what worked for me and what I could ignore. If you’re not sure what you need, I suggest starting here with the creating characters articles and trying anything that appeals to you. Google “creating characters” as well and see what pops up. There’s so much out there it’s impossible to list it all, but here are a few fun options:

Give your characters a Tarot card reading: It might sound crazy, but some card layouts cover the history, desires, needs, present, and future. You can even find them online, though I’m a fan of the Universal Waite deck. You can create an entire history and personality with a single “reading.” The readings are vague enough to work with a novel’s details, but specific enough to be unique.

Borrow a basic template: WikiHow actually has a page on creating characters, and it’s not bad. It covers a lot of the basics and has a nice step-by-step format that’s great for those who aren’t sure what they need or what to do. Writer’s Digest has another guide to get you started that covers some other aspects of character creation. Gotham Writers has two options that can get you thinking in the right direction, and The Athletic Nerd has a terrific roundup of dozens of links to character questionnaires.

Write their backstory as a scene: Pick a moment from their past and write what happens. Maybe it’s a short story, maybe it’s just a scene or two, but get inside the character’s head and see how they unfold on the page. You might learn a lot about them.

(Here’s more on one way to create characters)


Write out what you know about them, as much or as little as you need. Answer those questions, summarize those ideas, explain how their history influences their present.

Step Four: Understand How This Character Fits Into the Story


To me, this is the most critical step because it influences how we write a character. Characters who play no role and don’t serve the story at all are the hardest to write, because they don’t do anything. They’re practically furniture. But, for example, if I know Lola is the best friend, then I know the things a best friend ought to do and say and how she should behave. Her personality will develop as she and the story does, but I have a foundation to build on.

It’s easy to create a fantastic character who does nothing for the book. Sure, they’ll have interesting traits, flaws, needs, goals, all the fun aspects of good story people, but they’re random strangers on a street—they aren’t people in your story. It makes a difference, so be wary of creating “cool” characters that just take up space on the page.

(Here’s more on determining the roles your character play)

How you choose to develop your characters is up to you. Try different processes, pick and choose what you like from as many as you want—go wild and have fun. I like to keep the plot and story in mind as I develop my characters (I’ve found this helps keep me focused), but if you prefer to do it people first, then go for it.

What’s your favorite way to develop or create characters?