Birth of a Book: The Development Stage: Creating the Characters 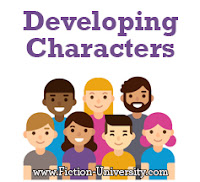 Over the last month, We've been going through the early stages of writing a novel. We started with the Idea Stage, turning a spark of inspiration into a solid and tested idea for a story. Today, we start with Stage Two: Development. The first stop is creating characters.

So far in this series, we went through exploring the Inspirational Spark. Then, we discussed Brainstorming the Idea. We then Clarified the Idea, and wrapped it up with ways to Test the Idea.

Creating Characters for Your Novel


There are as many ways to create characters are there are to write the novel, so with this series, I’m focusing more on the conceptual aspects of character creation.

Every writer is different in how a novel comes to them, but for me, my characters almost always start out as concepts—a girl who can shift pain. A double agent undercover. A boy who can sense magic. They’re connected to what will become the plot and the core conflict of the novel.

I tend to write plot-driven books, so I think in terms of the problems and the people in those problems first. Until I know the conflicts, issues, or hooks, my characters are just representatives of those elements. It’s the problems that drive my character building, and I actually figure out who they are by writing the first draft, so I don’t spend a ton of time on them in the early stages.

The is the opposite of what a character-driven writer typically does when creating characters. For them, it’s the character that drives the story and the personal journey, so the concepts are personal and specific in nature—Caroline, who’s struggling to get over the death of her son. Louis, who’s contemplating breaking the law in order to feed his family. Amina, who’s coming to terms with her budding sexuality. The focus is on the personal growth or problem to be addressed.

No matter where you fall on the scale between these two sides (and it’s a wide scale), the elements to consider are roughly the same:


The book is about somebody, or several somebodies. It could be the girl who shifts pain, or Caroline, the struggling mother, depending on how fleshed out the character first comes to you. At this stage, I name my protagonist and write a brief summary of what I know about them. These are the critical details about the character and the various arcs—plot, character, theme, etc. It’s okay if I don’t know a ton about this person yet, because I’m still figuring out all my story people. The protagonist will continue to evolve as I develop (and write in my case), the novel.


I don’t think I’ve ever had an antagonist come to me first, or pop into my head well-formed. They’re always vague concepts of the badness opposing my protagonist. I typically spend more time on the antagonist than I do the protagonist at this time, because I have less information to work with in these early stages. As with the protagonist, I name them and write a summary about them.

A lot of my conflict development happens here as I figure out my antagonist and how they’re connected to (and causing trouble for) my protagonist. The stronger and more developed this character is from the start, and the more I know about what they want, the easier the novel comes together for me. The novels I struggle with are always the ones where I know the least about my antagonist (and thus my conflict).


For most stories, your protagonist will have friends, family, and people in their lives supporting them. Other characters will play a role and affect how the story turns out—best friends, love interests, family members, co-workers. I typically know a handful of these from the start, and I name and summarize them as well.

This might make the character-driven folks cringe, but I’ll also create a list of names for “characters to be decided later.” I don’t always know who I’ll need or when I’ll need them, and I like having pre-made names that fit my world (since I write fantasy this is more relevant). This saves me time when I discover I need someone or a character organically appears in the story.

4. Who’s against the protagonist?


The protagonist has enemies besides the antagonist, and I like to have a few folks handy to stir up trouble. They’re not full-on villains, just characters who don’t like my protagonist or their friends, and who will be perfectly happy to cause them hassles if the opportunity arises. I like to pick a few people that are connected to the conflicts (internal or external) of the plot, but sometimes these characters just show up as I need them.

(Here’s more on enemies who aren’t the antagonist)


I like to look at love interests last, because that allows me to get a better sense of who the other story people are and how this person might be different. Other writers might choose this first, especially in a romance where the two protagonist are the love interests. It might be small, or it might be central to the entire plot, but I like to have a good reason these two people are interested in each other.

By the end of my character creation stage, I typically have between three and twelve characters of various levels ready to be fleshed out. I have a general sense of who is in the story, what role they play, and how they fit with the conflicts (internal and external). They’re still quite rough in most cases, but it’s enough for me to start plotting and developing the major turning points of the story.

Question for you guys: Do you want me to go into more detail on these five categories or move on the next step, which is creating the setting? I’ve written a lot about creating characters so I’m not sure if I need to do more on that, but I will if you guys want to see more of the raw development process I go through.