How Many Settings Should a Novel Have? 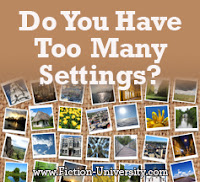 We often talk about “the setting” in a novel, but rarely does a story take place in one place. Characters change locations, even if they’re all rooms in a single house. Plenty of novels travel around the globe or even around the universe, and some even cross dimensions.

With all this running around, is it possible to have too many settings in a novel?

Before we go any further, I think it’s important to clarify what we mean when we say “setting.” Is it:
To me, “setting” has multiple layers. Every scene has a setting and those settings exist in a larger story world. That story world might be a fantasy land or it might take place in the real world. For example, my story world might be Florida (or more specifically, Miami) but the scenes take place in various locations within Miami and Florida. If you asked me where the book was set, I’d say either Florida or Miami.

But in reality, it’s the individual locations that truly make up the setting of the novel. It’s the old house on the ocean with the jalousie windows, the neon lights of South Beach, the park with all the iguanas and old Cuban men playing dominos. Simply saying “Florida” doesn’t convey the setting. “Miami” gets a little closer, but there are a lot of aspects to Miami. It isn’t until we get down to the scene level that our setting truly comes to life.

(Here's more on the difference between setting and world building)

So if we take all this into account, how many settings should a novel have?

As many as it needs.

Odds are a novel is going to have multiple locations in it, even if the story world is small. In the manuscript I just finished, for example, my protagonist visits three cities, and each city has scenes taking place in multiple locations. City A has six, varying from individual apartments to parking lots. City B has ten. City C has seven. That’s a lot of locations (And I bet I missed a few), but my protagonist is moving around a lot as she solves her problem. If I really wanted to get picky, some of those locations are really places with multiple rooms—so one “location” has scenes that take place in different areas of that location. If I treated my novel like a movie, I bet I have at least thirty different “sets” where events occur.

Is thirty too many?

I don’t think so (and neither did any of my beta readers), because my protagonist has very good reasons to visit every single one of those locations. They work with the plot and provide the necessary backdrop for the story.

(Here’s more on using setting to help build your world)

Let’s compare this to a prior manuscript of mine—which had two cities and far fewer locations within those cities. Nearly all of my beta readers felt there was too much running around and no one thought I needed the second city at all. Those locations didn’t serve the story and just muddied up the plot.

Why did one work and the other didn’t?

One book’s settings supported the protagonist’s goals and provided clues and context for the plot, story, and character arc. The other book took readers to places they didn’t care about going to, because they didn’t really get why the protagonist went there in the first place.

I think that’s the key when deciding on settings and where your scenes take place—how much will your readers want to go to those places? It’s not the number of settings that matter, but what the setting brings to the story.

This holds true for cities, planets, or rooms. If a protagonist walks through five different rooms in her house while having a phone conversation, and each room is described in detail even though it has no bearing on the character’s goal or the scene, readers are probably going to want that character to sit down and stop moving around. The setting adds nothing to the story.

But a story can move all over the place if readers are eager to see what happens when they get there. The setting offers a chance to discover new information and more clues to the plot puzzle together. The setting is an opportunity to show readers something about the story, be that a clue, a plot point, a bit of characterization, some foreshadowing, or any number of the things that can happen in a scene.

(Here’s more on what goes into a scene)

If you’re unsure if you have too many settings, ask what those settings bring to your story—if you can switch the location of a scene and nothing changes but where it happens, that’s a red flag that the setting might not be pulling its weight. But if going there means something and does more than just provide a place for the scene to unfold, you’re probably fine.

How do you define “setting?” How many settings does your WIP have?