Birth of a Book: The Idea Stage: Brainstorming the Idea 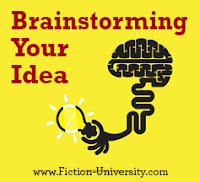 In this series, I’ll be analyzing the early stages of writing a novel. Part One is the Idea Stage, focusing on my own four-step process of developing an idea enough to turn that idea into an actual novel. Last week, I went through step one of the process, The Inspirational Spark. This week, let’s continue with brainstorming that spark into an idea.

I had four ideas I was considering to work on next. I talked about where the sparks came from, why I wanted to write them, and what my next step to developing them was. They were:

The project I chose to work on next: Novel A, The Middle Grade Fantasy

Why I chose this project: This is an idea I’ve been wanting to write, and after a conversation with a writer friend, the last few world building pieces I’d needed to start this project fell into place. It’s the kind of story I like to tell, and so much of it is in my head waiting to be written. From a business standpoint, it’s also the same market and genre as my already-published trilogy, which means I have established readers who will most likely be interested in this book. If this book does well, it could also give a nice bump to my older books.

It was a tough call, but this one made a little more sense overall. The final decision came down to asking, “How will this book advance or affect my career?" for each idea.

Why I didn’t choose the others: I’ll probably write all three of these within the next few years, but it really did come down to a practical business decision. The other three ideas would shift me (and my brand) into new areas where I’d have to “start over” with readers. I’ll have some crossover, but not the bulk of my audience. Since I have an adult paranormal with my agent now, I’ll already have one book outside my audience. Doing another might stretch me too thin at this point in my career.

Novel B: The Young Adult Contemporary: This was the toughest one to walk away from, because I adore this idea, but it would take me in a totally different direction creatively. I also don’t have a lot of other YA contemporary ideas, and I’d want to be able to offer more books for these readers to build this different audience. However, I’ve decided to use it as a reward for getting my other projects done. If I can get the MG fantasy first draft done, and finish the writing book that’s scheduled after it, I’ll write this YA during NaNoWriMo. It’ll be tight, but doable if I buckle down and focus.

Novel C: The Young Adult Science Fiction (Rewrite): This is an idea I really love, but right now I feel the need to work on a new idea, not rework an older one. I suspect this might be next year’s NaNo novel.

Novel D: The Adult Paranormal Mystery (Series): When book one is sold or published (either traditionally or indie), I’ll write this one, so it’s not a novel that needs to happen right now. And if I happen to get a multi-book contract or book one does well as an indie, I’ll be focused on this series for a while. This could be my last chance to write something different for a while.

So those were my reasons for my decisions. Mine were probably a bit more career-focused than someone who hasn’t yet published, but it’s still smart to consider your career when choosing projects.

(Here’s more on choosing which idea to work on next)

Now that the hard choice has been made, it’s time to move on to…


This step is one of my favorites, because there are so many possibilities for a single idea. Different writers will take different directions, but the general process is the same. We figure out what we need to know about our story to write it. I use questions from my Plotting Your Novel book to guide my brainstorming process (Yes, really! This is how I know they work).

What the Idea is About


After the inspirational spark, I like to boil the idea down to what the story is about. Sometimes I’ll write a rough pitch line or a few sentences that cover the basic core of the story. It’s what I’d answer if someone asked my what the book was about.

Why this is useful: I like having boundaries on an idea to keep me from going too wide during my brainstorming sessions. This “what my idea is about” line gives me enough direction to develop the idea organically, yet still keep it focused on what I want to do.

Your process may vary: If the whole point of your brainstorming is to find this idea, then don't worry about this until you're done. Some writers will have a clearer idea of their idea going in than others, and that's normal. It can even vary from book to book with the same writer.


Every story needs people. With my process, I do very little character building at this stage, so more character work is just deciding who the general characters are and choosing names (I like to learn who my characters are during the first draft by putting them into trouble and seeing what they do). I’ll list characters I know I’ll need (such as the protagonist and antagonist), and anyone else I suspect is part of this tale. Best friends, family members, henchmen, nemeses, etc. Some might be called “best friend” at this point, but I know that person will be in the story, even if I know nothing else.

Why this is useful: It’s a lot easier to brainstorm when I can call my characters something. “The girl” gets confusing if you have multiple girls. It also starts turning these vague character concepts into real people, so I get a better feel for who they might be.

Your process may vary: Many writers start with characters and develop ideas from there, so if this is your process, you’ll spend a lot more time in the early stages creating characters than I do.


I like to build my fantasy worlds from real places, so research is my first step. I find a location (or several) with the general feel of what I want, and world build from there. I aim for a general sense of how the world works, how the people in it make a living, how the protagonist and antagonist fit into it, etc. For the MG fantasy, I’ve been using a private Pinterest board to pin photos that sparked ideas, and this has been quite useful.

Why this is useful: Since I write fantasy and science fiction, this is always a huge step for me. The world takes a significant amount of my brainstorming time and energy, because if I don’t understand how the world works, I can’t figure out how the story fits into it. The world always plays a role in the plot and conflict, and without those details, I can’t move forward.

Your process may vary: For some, setting doesn’t affect the overall story, so it takes little to no work to develop. Don’t feel you have to spend a lot of time here if just knowing the city is enough for now.


This is when I start thinking about the greater concepts of the book and how the characters, conflicts, and world all fit together. Sometimes themes come to me right away, and I can see the growth the protagonist needs to take. I might not have any idea what form that will take, but I know, for example, that the protagonist will need to learn to trust others, or that she’ll need to stop making a particular mistake.

Why this is useful: This is when the first bare bones of plot start to take shape for me. Not anything specific—but I’ll see the conceptual shape the story is going to take. The theme guides me toward the plot. For example, if the story is about escape, or redemption, or responsibility, I’ll use that theme (or themes if I have several I like) and try different options of how my characters and story might explore it. It also gives me parameters for how to create my characters. If the story is about escape, then I’ll know many of my characters will be trying to escape something—literally or metaphorically.

Your process may vary: For some, theme comes after the book is done or develops as the novel does. Don’t feel you have to choose a theme this early.

(Here’s more on developing your theme)


The plot is often this is the first thing that comes to me with an idea—the general conflict and problem that must be resolved. But it isn’t until I’ve brainstormed the story world, people, and themes that I can start thinking about the specific problems and conflicts in this story. At this point, I’ll explore how my characters might struggle in my world and how they might conflict with each other using those details.

Why this is useful: This lets me know early on if the story is ready to write, because if I can’t see where the plot will come from, I know the core conflict isn’t there yet. I don’t need to know everything at this point, but I usually know the general problem that will drive the novel and how it works thematically with the rest of the book. For example, if the novel is about redemption, I’ll know the core conflict will somehow redeem my protagonist. Which means she must have done something that requires redemption in the first place. This will guide me when I flesh out her character and create her backstory.

Your process may vary: Not every writer starts with plot, so don’t worry if this is the last thing you think about. Many writers need to know and understand their characters before they know what to do with them.

Brainstorming an idea is all about the “what if?” and exploring where an idea might go. Feel free to chase different options and mix and match ideas, and even throw out characters or ideas when you find better ones. Nothing at this stage is set in stone, so don’t try to keep something that no longer works if you find yourself forcing it to fit. Let your creativity run and see where it takes you.

How much brainstorming do you do? What comes to you first?