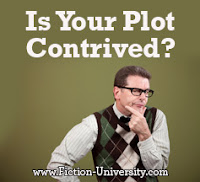 Have you seen or read any contrivances lately? Have you written any?
For more help on plotting or writing a novel check out my Plotting Your Novel: Ideas and Structure.