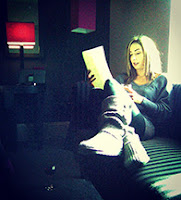 JH: As a plotter by nature, it's always fascinating for me to hear about authors who develop novels from characters. Today's lecturer shares her process and how her characters inspires her stories. Please help me welcome Patricia Caliskan to the podium.

Patricia Caliskan began her writing career as an entertainment journalist, before joining Trinity Mirror Newsgroup. She likes a nice, flouncy scarf, a good pair of boots, and laughter. Lots of laughter. Otherwise life feels far too grown-up for her liking.

Take it away Patricia...

Think about your favorite books, and sure enough, it’s your favorite characters who take center stage. For all the most original, fascinating, plot twists, without a strong reaction to indelible characters, would we really care to turn (or scroll) the pages alongside them?

Characters are at the heart of your story and the engine behind every plotline. They’re the people who form an emotional bond with your readers. They create empathy, laughter and tears, and ultimately, they’re the reason why we spend our time reading, and caring about, the outcome to their story.

In my novel, I chose to write about two very different women. Their relationship gave me my title, Awful by Comparison, and was a way for me to explore how we relate to each other as siblings and within a larger family dynamic.

I’ve always been fascinated by how our family background shapes our perception of "Self," inspiring us to be "Other." We very rarely hear of siblings who both occupy the title of the clever one; the funny one; the sensible one.

Instead, we’re characterized by our parents. Our formative identities tend to be based on attributes seemingly lacking, or all too obvious in our siblings, or by very early impressions of core personality traits as reiterated by the people around us from an impressionable age. In short, in the whole debate between Nature versus Nurture, we’re all creations of circumstance. And so are your characters.

When it comes to creating characters, I’ll often start with a key sentence, uttered by my protagonist, which tells me what’s on their mind and reveals the direction of their journey. In Awful By Comparison, Jennifer Taylor told me:


"You mightn’t know my sister’s name, but you’d probably recognize her face."

As strange as it may sound, but I’m sure a lot of you will agree, without listening to our characters, there would be no writing. I eavesdrop. I observe. I get to know my characters. The way they sound. Phrases they might use. And I get these initial notes jotted down as quickly as possible. That’s the magic. Let your characters do their share of the work. Those are the moments that keep me typing until the sun comes up.

Next stop, after paying attention to what our character’s interested in telling us, we need a name. Names are so important to most of us at this early stage. Without the right name, the whole story just doesn’t sit right. We might be excited by our ideas, we might even be a few pages into the work, but if our leading lady is a Catherine, and you just can’t shake the feeling that deep down she’s really a Caroline, you’ll find your keyboard hitting the brakes quicker than you can cry, "Writer’s block!"

As small as it may seem, this very basic decision is a very positive development. You’ll find a smile on your face once you know you’ve got that all-important name right. When we christen our creations, they become vivid to us, and, the hugely important part–more, equally vivid, details follow, infusing our plotlines and giving us that beginning, middle and an ending to our story.

Our little world is gaining an identity all of its own by about this stage, which means we have something we can really invest in to write about.

Are you excited yet? You should be!

How they look. Where they work. The way they fold their arms. What coffee they tend to order, if they drink coffee at all. These minor details can sometimes become hugely important to the themes of your story. This means we’re really getting to know our characters. Their body language. Their history. Their preferences. All of these details mightn’t end up in ink, but they’ll make you more confident in the storytelling.

If these minor details do finally make it onto the page, with the lightest of touches, these inclusions can also give your readers subtle insights into deeper personality traits, and possibly foreshadow important plot development.

So, once we’ve made those basic introductions, what happens next? Well, hopefully, if you’re ever going to type the wonderful words you’ve been daydreaming about: "The End," quite a lot. You’re going to be spending a lot of time with these characters, so you have to love them, or loathe them, for all the right reasons. Specifically, because there’s a plot centered around and shaped by them.

That thing you know (because the character told you) they do on Saturday afternoon, could become the whole basis for a novel.

I’ve tried to become one of those fantastically structured writers who begins work on a synopsis and ends up with a riveting plot, but for me, at least for now, it all starts with these character notes. And thankfully, it’s a lot of fun. In fact, I can’t walk past a lovely, new notebook without wondering who’s going to appear across those tantalizingly empty pages.

See? I’m thinking about them now.

Once I tune into a character, to some extent, the synopsis is all down to them. It’s their story, not mine. And while I may have the best of intentions, and at least a couple of much-loved, scrawl-filled notebooks to prove it, it’s my characters who invite me into their dilemmas while I stick around for the journey.

I’m the first reader of the story, and it’s my characters who tell it.

About Awful By Comparison

Jennifer Taylor is home for the holidays, but she’s in no mood to celebrate. It’s a month before Christmas, and she has been made redundant from her job as a bookseller. And to make matters worse, she’s lost her apartment and broken up with her boyfriend.

With no income and no savings, her only option is to move home with her parents.

Things could be better, but Jennifer is used to living in the shadows. That’s what happens when your sister is the beautiful New York-based model, Lara Taylor. As fate would have it, Lara is also home for Christmas with the whirlwind news that she is getting married. But it turns out that Lara’s life isn’t as perfect as it seems.

At 32 she is washed up – her agent won’t return her calls, her second ex-husband bankrupted her, and now she’s marrying Silvano who is nothing more than a good friend. And it turns out Silvano is keeping a pretty big secret of his own.

After a huge family argument, Jennifer is the only member of the Taylor clan to travel to New York for the nuptials. But just when all hope is gone, the fairy-tale magic of Manhattan weaves its spell.

Perhaps it’s not too late for Jennifer’s happily ever after after all?

Set against the magical backdrop of New York–the city of dreams–Awful by Comparison is a charming romance novel that will have you laughing and crying in equal measures.