Is a Lack of Action Really the Problem? 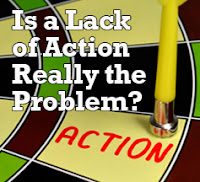 Q: This may sound too general to address with concrete examples, but I'll post it anyway with the hope that others struggle with it too: when passages are mainly dialogue, how can you add in little touches of (modest) action?

For example, I'm writing a sci-fi novel. In certain passages where the crew is trying to devise a weapon to defeat the enemy, I have not found a way to insert much action. The story's protagonist is the ship's captain, and she cannot be personally involved in things like weapons building. So I'm reduced to having her call meetings to discuss strategy, which can only maintain our interest for a page, at most.

Is there any trick, mental or otherwise, that one can use to break out of the trap of no-action scenes? When this happens, I find myself going perhaps too deeply inside her head to reveal her fears and discontentment since blocks of nothing but straight dialogue would be boring.

A: Yes, a very easy trick. It’s not about the action, but the conflict.

Conflict and the need to know what happens is what keeps readers reading. I suspect the reason you’re having trouble here is that your instincts are telling you there’s a problem (good instincts), but they’re looking in the wrong place for the answer.

The best-written action scene in the world won’t hold a reader’s interest if it’s just a description of stuff going on. Two people sitting on a bench having a conversation can be the most riveting scene in the world if the scene is packed full of conflict.

There’s a series (The Lost Fleet by Jack Campbell) that has a ton of “fleet officers having a meeting” scenes. They’re discussing upcoming battles, speculating over enemies, talking about weapons—probably not dissimilar to what you have in your novel. None of them are boring, because every meeting is about more than the logistics of the meeting itself. There’s conflict between the protagonist, and pretty much everyone else. Doing something similar will likely fix your issue as well (and anyone else having this same problem).

Take a closer look at what the conflict is in these meeting scenes. I’d bet there isn’t any, or it’s so general (such as, “we need this weapon to beat the bad guy”) that it’s not affecting the outcome of the scene, and that’s why they feel boring to you.

(Here's more on easy ways to add conflict to a scene)

Think about how you can bring conflict into those meetings. Make the scene not about the meeting, but about something else that happens to occur during these meetings. You might have to get creative and shift some events around, but I’d guess you have plenty of conflicts (both the main plot and subplots) that can butt heads at these times.

You can also create conflict in the meeting itself by having opposing opinions. Make siding with different people have consequences, so choosing the right course of action isn’t so cut and dry. Force the characters to make impossible choices that will have lasting ramifications. Let other characters air dirty laundry at the meetings, suggesting potential problems between the crew down the road. Use whatever works for the story and fits the plot.

Another way is to slip some discussions into scenes that already have interesting things going on. Maybe a crew member has an idea and wants to run it by the captain when he runs into her in the halls. Or the XO mentions something he overheard the engineers speculating on. It might even be conveyed with the captain reading a quick report that briefly mentions the pertinent information.

When our instincts are telling us something is off, we’re usually right, even if we’re not right about the underlying cause. Most boring scenes are boring because of the lack of conflict, and we feel we need to “make stuff happen” to get it interesting again. But all we really need to do, is make the scene do more than dump information on the reader. Find a way to add conflict and make readers anticipate something in the scene, and they won’t care if all your characters do is sit there and talk.

Do you have any scenes that could benefit from more conflict?